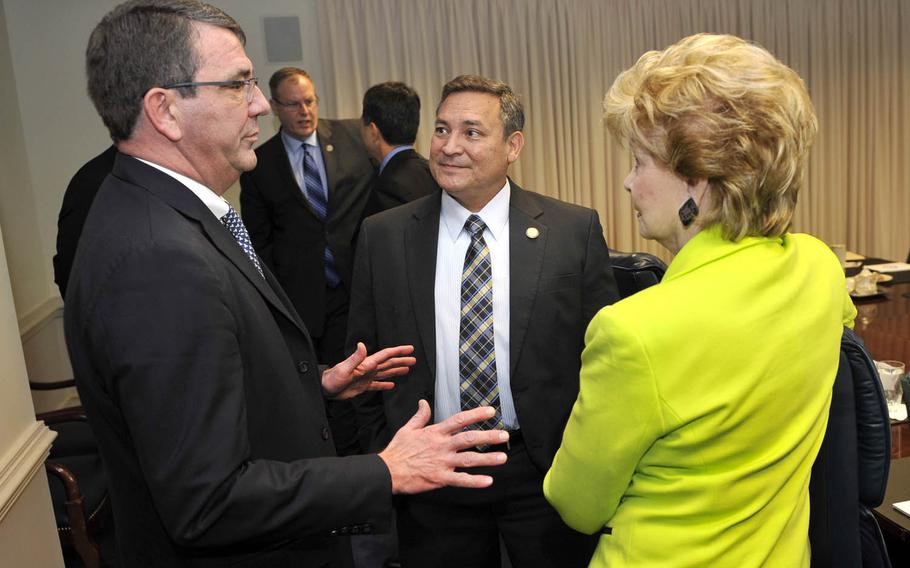 Then-Deputy Secretary of Defense Ash Carter, left, meets with Guam Gov. Eddie Calvo and Delegate Madeleine Z. Bordallo at the Pentagon in 2013. Calvo has ordered the Guam EPA to test the island for traces of Agent Orange. (Glenn Fawcett/Defense Department)

Guam’s Environmental Protection Agency has been ordered to test sites around the tiny U.S. island territory for traces of the toxic Vietnam-era defoliant Agent Orange.

In a letter dated Jan. 19, Gov. Eddie Calvo instructed the agency’s on-island administrator, Walter Leon Guerrero, to examine “drinking water sources and soils,” where U.S. military veterans who served there in the 1960s and ‘70s claimed the toxic-chemical mixture had been sprayed.

“I have justifiable concern about the residual effects this chemical may have on our environment, particularly our aquifer and drinking water sources,” wrote Calvo, who said the testing was necessary after the veterans’ public claims.

The governor did not provide additional details about the claims or when they were made.

Guam EPA said it has requested affidavits from those veterans to pinpoint potentially affected areas, and is discussing the issue with colleagues in the U.S. and at the Defense Department.

Agent Orange, used to defoliate jungles and kill crops during the Vietnam War, has been blamed for a slew of veterans’ health problems, including cancers and heart disease. It has also been known to cause birth defects in the children of those exposed.

The military discontinued the defoliant’s use in the early 1970s. Since then, veterans have battled Veterans Affairs for benefits related to exposure. Some cases have been recognized, while others were denied. Guam and Japan — most notably Okinawa — have been left off the list despite claims.

Guerrero said Monday that he, too, was concerned about Guam’s drinking water, adding the EPA was in discussions on how to conduct the investigation, including “sampling methods, analysis and abatement measures.”

Guerrero said they had begun talks with the U.S. EPA’s Region IX Emergency Response Team, which has worked with the Superfund Technical Assessment and Response Team, or START, in the past. START is in the removal and mitigation of dioxins.

Standard quality control practices will be observed with any samples collected, he said.

“If there is any discovery of dioxins on Guam that can be linked to Agent Orange, the Guam EPA will coordinate with the Guam Waterworks Authority, the Joint Region Marianas and Water and Environmental Research Institute of the Western Pacific (WERI) to engage in remedial action, upon discovery,” Guerrero wrote. “Our agency will work in tandem with other agencies in critical areas to meet our mission in safeguarding the environmental and human health on Guam.”

Guam EPA said it would keep the public informed; however, the agency did not respond to Stars and Stripes’ questions regarding potential sites, a timeline or DOD cooperation.

Calvo, who said he was especially concerned about Agent Orange carcinogen 2, 3, 7, 8-tetracholordibenzodioxin, or TCDD, added he would be “closely monitoring” the federal response.