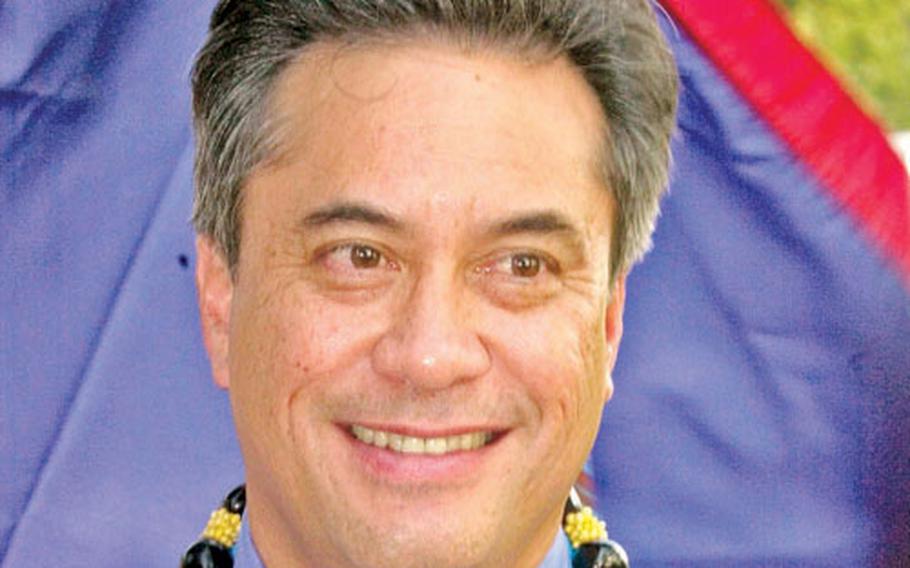 Ever since Spain ceded Guam to the United States at the end of the Spanish-American War more than 100 years ago, the island has been a strategic U.S. military station in the Pacific for naval and air forces, munitions and supplies, and rescue and recovery for wounded servicemembers.

Now comes the latest chapter: 8,000 U.S. Marines are to move from Okinawa to Guam.

With the arrival will come a need for a major overhaul of the island&#8217;s infrastructure at the same time the government is struggling to find enough money and manpower to provide residents with basic public needs, such as education and healthcare.

The Marines are to arrive gradually between 2008 and 2014. Details about the spending of $10.6 billion for the buildup &#8212; of which $6.1 billion will come from Japanese grants and loans &#8212; have yet to emerge. The first look at a master plan of the buildup is expected later this summer.

Guam Gov. Felix P. Camacho, a Republican facing re-election this year, spoke Friday with Stars and Stripes about opportunities and challenges that lie ahead for Guam. The following are excerpts of that interview:

Q: What do you see happening for Guam in the near future with the military?

A: The role of the military on Guam and its impact in our lives has always been tremendous, and I believe a very positive and good one at that.

I see an opportunity over the next 10 years or so for tremendous growth and an opportunity to diversify our economy. In the past we&#8217;ve relied on two primary legs that drove our economy. One was tourism &#8212; that had to develop over the last 30 years &#8212; and there was military. And with BRAC, base realignment and closure, there was certainly a downturn. Now we&#8217;re seeing that other leg of our economy, the military, come on very strong. If they&#8217;re both strong simultaneously it means a tremendous opportunity for Guam, economically and socially.

Q: The Pentagon obviously sees Guam as a key part of its international plan. How can you leverage that to help the island?

A: I&#8217;ve got to highlight to the authorities that have the ability to help us &#8230; the fact that an island economy like this is extremely limited in its resources and its finances. [Guam has] to quickly &#8230; install the necessary infrastructure needed in the areas of water, wastewater, power, our highways and secondary roads, our airport, our seaport. And of course we have to close our current dump and open a new landfill that will, someday, have to also accommodate the military population.

Along the infrastructure needs is also the area of quality of life. I believe [the Department of Defense] is very sensitive to that.

But because there is so much coming in such a short time span, there&#8217;s going to be a need to be conscious of this and work very diligently.

Q: Will Guam realistically be able to share in some of that $10 billion being talked about for spending on the buildup?

A: If you factor in Air Force and Navy and their long-term plans, that&#8217;s potentially another $5 billion. That&#8217;s a lot of money to spend in a place like this. Can we get a portion of the (DOD) funding? That remains to be seen.

I know that it&#8217;s very closely guarded revenues for projects that have already been planned out. And so with that we definitely are waiting in anticipation for the master plan that will be submitted to PACOM and Admiral Fallon by the 11th of July. And once that becomes public, we can then see what their master plan is and how that may possibly overlay some of our infrastructure requirements and plans and see if there are ways we can work together. It may have to be (funding) other than or separate from DOD.

A: There&#8217;s got to be a need to take a look at how things are structured. We can&#8217;t just be confined by the way things have always been. We are looking at ways that can be beneficial to the island. (If) personnel are stationed here, then the island should benefit from it.

And along those lines, we have to take a look at all the construction money coming in. Most of the jobs that will be awarded in the area of construction will more than likely go to construction firms that are based in the United States, in the mainland, with their corporate headquarters there. With all that is being spent here, we must be able to garner our fair share of those expenditures as it relates to taxes.

Q: Is it possible, too, that because Japan is to make such a huge investment that some of those jobs and contracts will go to Japanese businesses? Will they play a role in building and perhaps even owning some of the facilities here?

A: I&#8217;ve not been privy to the details of the agreement made between the United States and Japan. However, I wouldn&#8217;t discount that. I&#8217;m sure that they are going to make a very strong argument for that, if it&#8217;s their money, to benefit some of their business interests. Until I see the details and the plans of what they have, then I [can&#8217;t] comment on it.

Q: What do you see as the greatest challenge for Guam in the short term?

A: The impact on the infrastructure is going to be tremendous. And, secondly, I believe that as a community we need to work together to ensure that their presence here is well-received, and that a relationship is developed. Some members of our community are a bit skittish and a bit worried, and rightfully so. And with those concerns we have opened the table for everyone, through dialogue and communication that is open, that is constructive and that is solution-oriented.

Q: Do you feel confident the military will use its existing footprint on the island for the buildup?

A: Yes, it will. I don&#8217;t anticipate them seeking any additional lands other than what they have. I think it&#8217;s more than sufficient to address their needs and fulfill their mission.

Q: Everyone keeps talking about the 2008 to 2014 timeframe. When will Guam residents really start to see and feel the construction, improvements and growing population?