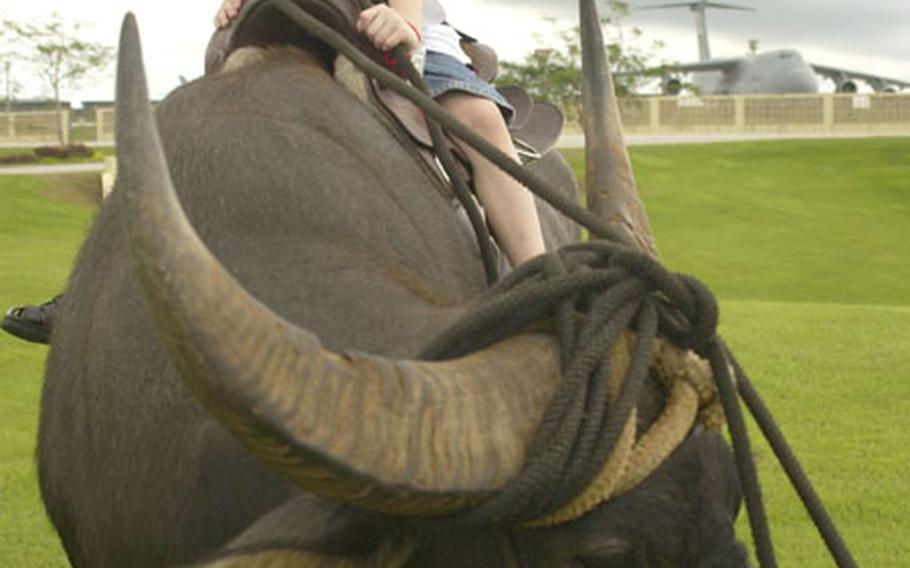 Ben Davis, a child from the Andersen Air Force Base Child Development Center, rides a carabao during a Fourth of July Freedom Festival at Andersen&#39;s heritage park. (Courtesy of USAF)

(Click here for the Stars and Stripes Special about the Liberation of Guam in 1944.)

ANDERSEN AIR FORCE BASE, Guam &#8212; Hundreds of people joined the Freedom Parade on Friday, an early Fourth of July celebration.

The parade wound its way from the back gate&#8217;s Santa Rosa Boulevard to Arc Light Memorial Park, where free food, games and prizes were offered.

Booker Rodgers, one of 36th Services Squadron&#8217;s head cooks, helped prepare enough food to feed 2,000 guests. The menu included barbecued beef and pork, crawfish, hot wings, rice and chips. Inflatable kiddie pools filled with ice, soda and water were placed in the shade, out of the way of the brutal sun as thermometers crept toward 90 degrees.

Staff Sgt. Michael Swanner found a good way to beat the heat by volunteering to ride the bench in the &#8220;dunk tank,&#8221; where people attempted to dunk him in the water by throwing balls at a target.

Two-year-old Valerie Meija, dressed in pink and grinning wildly, dunked Swanner with a little help from an attendant. Her prize? A pair of hot pink sunglasses to match her outfit.

Tech. Sgt. Shane Rast, of the 734th Air Mobility Squadron, said he was on &#8220;chasing&#8221; duty, watching his daughters Madison, 2, and Caroline, 4, as their mother, Andrea, worked a booth selling cotton candy and other treats.

Rast said the event was the first they&#8217;ve attended since arriving on Guam in January.

He said his daughters especially liked the face-painting booth.

About 12 security forces personnel volunteered to provide security at the event.

Senior Airman Forrest VanWest, dressed in a camouflage utility uniform with an orange reflective vest and sunglasses, stood watch near the parking area in range of the smoky smell of the free barbecue.