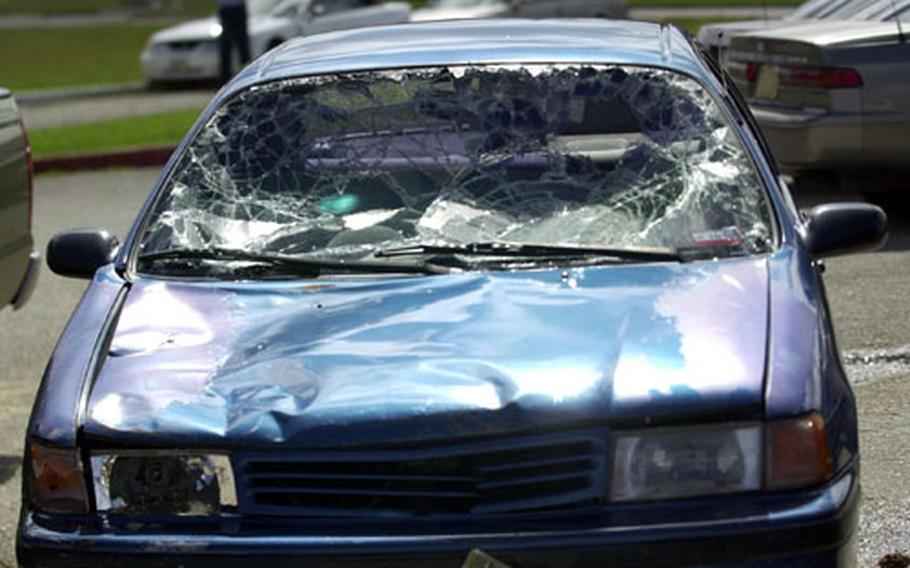 Typhoon damaged cars are a common sight on all bases in Guam. (Jason Carter / S&S)

Typhoon damaged cars are a common sight on all bases in Guam. (Jason Carter / S&S) The legal offices at Naval Forces Marianas and Andersen Air Force Base are preparing for an onslaught of damage claims from Super Typhoon Pongsona, the latest natural disaster to hit the Pacific island on Dec. 8.

&#8220;Almost everybody I talked to took water up in their house. With no power to suck up the moisture, homes are starting to mildew.&#8221;

Petty Officer 1st Class Ben Corliss, 34, a resident of the Naval Hospital housing area, knows all too well about mildew.

Water during the typhoon seeped into his house through window cracks and door seams. Damp carpet in his home needs to be scrubbed daily with a bleach and water solution.

Corliss isn&#8217;t bad off compared to some neighbors.

The Personnel Claims Act provides that Department of Defense personnel overseas &#8212; on and off base &#8212; may file claims due to &#8220;unusual occurrences such as natural disasters.&#8221;

There are three types of claims: food, personal property and privately owned vehicles.

Food losses have first priority, Harris said. In most cases, there&#8217;s no limit on dollar value. Without a receipt, the total cannot exceed $200, unless one executes an affidavit.

For all claims, except cars, there&#8217;s a $40,000 limit, Harris said. Vehicle owners may claim up to $3,000 for damaged or totaled automobiles, including the insurance company deductible.

Before submitting a claim to the legal office, one must first seek compensation for losses through private insurance policies, such as car or renter&#8217;s insurance, Harris said.

People assigned to Naval Forces Marianas are just now beginning to inquire about claims, as life slowly returns to normal, Harris said. They have two years to file a claim through their commands.

Food claims should take about a week to be processed, while property claims may take a month, she said.

Down the road at Andersen, claims will probably be &#8220;in the hundreds of thousands of dollars,&#8221; said Air Force Capt. Ibn Spicer, claims officer with the 36th Air Base Wing Judge Advocate.

Most everything can be claimed, except in instances of carelessness, where, for example, lawn furniture was left untied during the typhoon.

Claims at Andersen must be submitted directly to the legal office, which has held claims briefings twice daily since the day after the typhoon.

More than a dozen people attended one of the briefings this week. Several were in the process of moving on base due to Pongsona.

A window in Capt. Sarah Truscinski&#8217;s off-base apartment blew in during the storm, and most of her furniture was damaged.

Her damages list is two pages: a couch, bedroom furniture and clothes.

Capt. Ben Armstrong, 35, and his family tried to beat the typhoon out of Guam. The day of the storm, the Armstrongs planned to fly to Australia.

The family stayed at the Hilton the night before to avoid any typhoon lockdown restrictions at Andersen. Instead, they ended up at ground zero, Armstrong said.

A tree toppled and totaled Armstrong&#8217;s Nissan Pathfinder in the hotel parking lot, and a shed with lawn furniture back home blew away.

The Armstrongs don&#8217;t know if their plane tickets are refundable.

TUMON, Guam &#8212; Since the gas shortage subsided, locals and others are venturing here at night to find that Guam&#8217;s most popular shopping, eating and party district barely maintains a pulse.

Storefronts are boarded. Mixed drinks with ice are hard to find. And pulsating dance floors are silent.

&#8220;Guam ain&#8217;t so glamorous anymore. It looks like a ghetto,&#8221; said Senior Airman Francisco Zamorano, 22, who deployed to Andersen Air Force Base from Yokota Air Base, Japan, after the typhoon hit Dec. 8.

The thin crowds Wednesday night in Tumon, a tourist magnet near the beach, were a mix of locals, military personnel, some families, and federal workers from the States helping with recovery efforts.

The tourists vanished after Pongsona canceled flights into Guam.

&#8220;It is dead,&#8221; said Frank Benavente, a former Marine and Guam police officer in the Tumon and Tamuning precinct.

&#8220;This is usually where everyone comes to party. The only ones we&#8217;ve been seeing around is the military and people who came here to assist with the natural disaster. Not too many places are open.&#8221;

Even the Alcohol Beverage Control store, which usually keeps hours past midnight, closed at 5 p.m. Wednesday night, workers could be seen inside the locked glass doors mopping floors.

Above the ABC store, Zamorano hung out with buddies mostly from Yokota at Tumon&#8217;s Hard Rock Cafe.

They chose a table outside on the balcony, since the restaurant&#8217;s air conditioning was broken, and drank beer, the only alcoholic beverage available.

The Hard Rock Cafe offered a post-typhoon, 40 percent discount to all local residents and military personnel.

April Donohoe, 27, a Navy airman from Andersen, was one of the few people sitting outside on the poorly lit sidewalks. She and her date, who had yet to show, planned to go to the bar Bully&#8217;s, &#8220;since our options are fairly limited still,&#8221; she said.