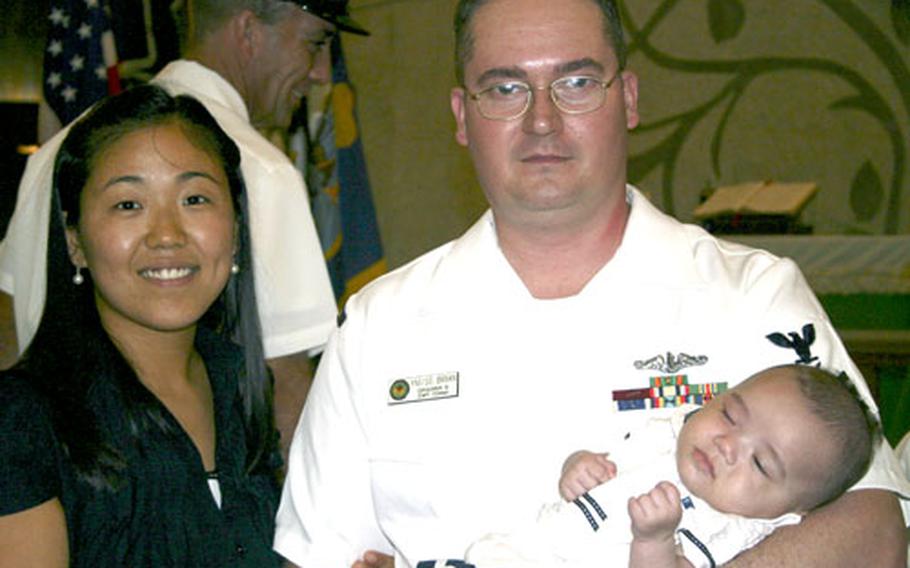 Repeatedly being under fire in Iraqi convoys and taking the lead in planning a Seabee Ball in Baghdad were among actions cited in the narrative accompanying the Bronze Star Medal given to Yeoman First Class Matthew S. Bryan on Wednesday.

He received the award in a ceremony in the Naval Base Guam chapel for actions during his six-month deployment in support of Operation Iraqi Freedom. Bryan, a staff member of Guam-based Submarine Squadron 15, volunteered for the deployment as an individual augmentee to the Army. From Nov. 5 to May 10, he was noncommissioned officer in charge and convoy commander with J-7, the Multinational Security Transition Command&#8217;s engineering department.

Bryan led &#8220;his team of soldiers, sailors and airmen in over 40 combat convoys throughout Iraq,&#8221; according to the award narrative, which said the convoys often came under attack from small arms fire and homemade bombs.

While Bryan was in Iraq, his wife, Kui-Young Kim Bryan, gave birth to the couple&#8217;s son, Dea-Guen, now 3 months. She said she was proud of her husband and even smiled about their $500 phone bill &#8212; which included the call during which he listened to his son&#8217;s birth.