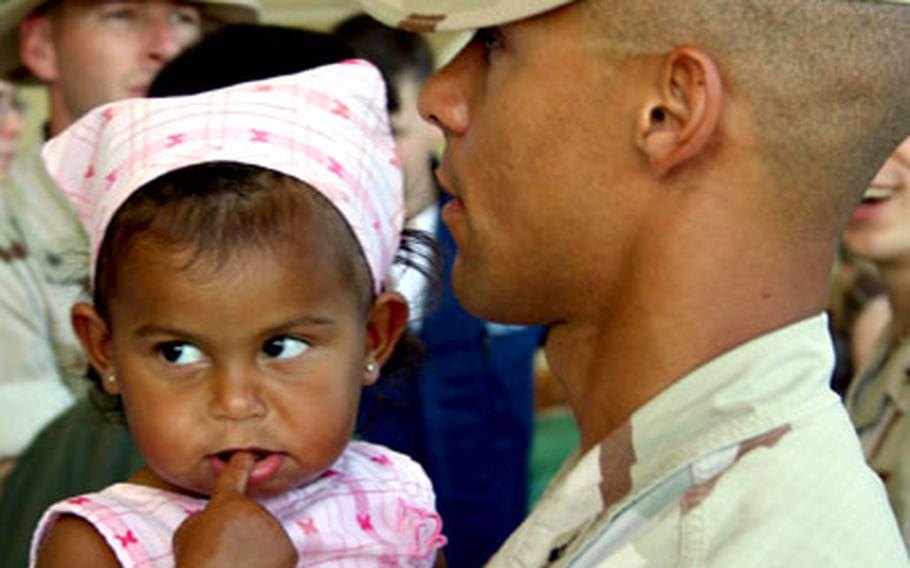 Forty-four members of Detachment Five of Navy Helicopter Sea Combat Squadron 25 were welcomed back to Andersen Air Force Base, Guam, on Wednesday after completing a 10-month deployment to Camp Buehring, Kuwait.

During their deployment, HSC-25 personnel partnered with a sister detachment from Helicopter Anti-Submarine Squadron 15 from Jacksonville, Fla., to form a new unit, the 2515th Naval Air Ambulance Detachment, according to a 2515th news release.

The deployment marked the first time Naval Aviation has been tasked with MEDEVAC, according to the release.

Since the 2515th&#8217;s mission augmented similar Army units, much of the preparation consisted of familiarization with Army procedures and operations, Lt. j.g. Sam Mason was quoted in the release as stating. Mason, a pilot, is the 2515th&#8217;s public affairs officer.

&#8220;We broke a lot of new ground for the Navy by doing this Army mission and we excelled at it,&#8221; said Chief Warrant Officer Tandy Holland, the 2515th&#8217;s maintenance material control officer. &#8220;We perform maintenance in a totally different way than the Army.

During Wednesday&#8217;s ceremony at the squadron&#8217;s maintenance hangar, Cmdr. Christopher Brunett, HSC-25&#8217;s commanding officer, noted that all 44 participants had volunteered for the mission. The detachment took part in something never before done by the Navy, he said.