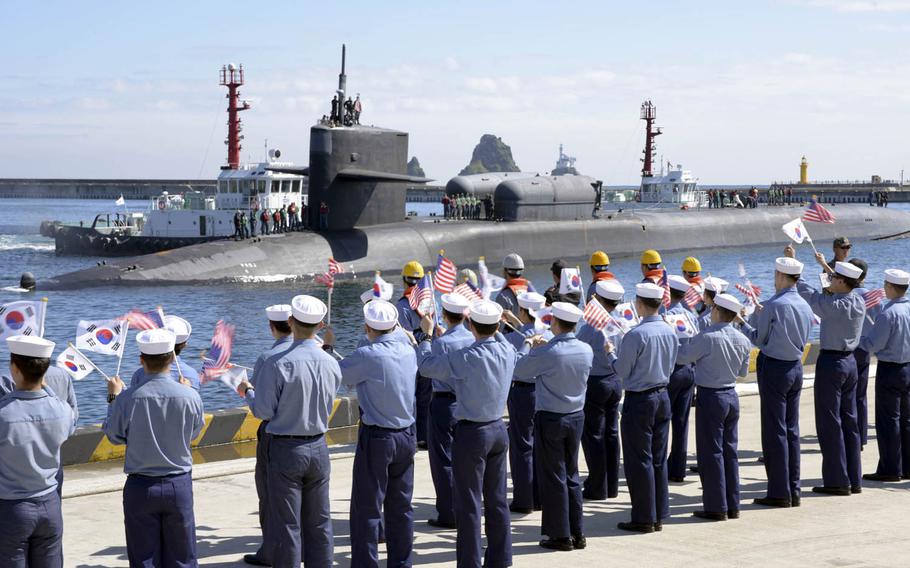 SEOUL, South Korea — The USS Michigan arrived in the southern port city of Busan on Friday, the second U.S. submarine in as many weeks to arrive on the divided peninsula.

The Navy said the Ohio-Class guided-missile submarine was making a routine visit during a regularly scheduled deployment to the region.

But the port call comes at a time of escalating tensions between the United States and North Korea, which has stepped up the pace of its nuclear weapons program.

President Donald Trump has threatened to “totally destroy” the North if forced to defend the U.S. or its allies.

Washington has agreed to deploy so-called strategic assets in and around South Korea on a more regular basis to provide better deterrence against the North.

South Korea sees that as an important measure of the U.S. commitment to the longstanding alliance between the two allies who fought together in the 1950-53 Korean War.

The 560-foot-long USS Michigan, which weighs more than 18,000 tons when submerged, is armed with tactical missiles and capable of launching strikes and supporting missions by special operation forces, a statement said.

Its homeport is Bremerton, Wash., but the submarine is based in the U.S. Pacific island territory of Guam.

The smaller USS Tucson, which is capable of firing Tomahawk cruise missiles, made a port call last Saturday at the U.S. base in Chinhae.

The U.S. also has sent Guam-based B-1B bombers over the peninsula twice in recent weeks in a show of force amid speculation the North is preparing to conduct another ballistic-missile test.

The communist state has test-fired dozens of missiles over the past year and a half, most recently on Sept. 15 when it sent a missile over Japan.

It also has conducted six underground nuclear tests since 2006, including its most recent and powerful on Sept. 3.

“Today, our relationship is stronger than it has ever been and our ironclad partnership is further reinforced by this visit from Michigan.”

The deployment of U.S. bombers, submarines and aircraft carriers to the peninsula always infuriates the North, which considers it a sign of aggression and signal of preparations for an invasion.

Experts have warned the uptick in belligerent rhetoric from Trump and posturing by the military could lead to a miscalculation and possibly an open conflict.

About 28,500 U.S. servicemembers are based in South Korea, which remains technically at war with the North after the three-year war ended in an armistice instead of a peace treaty.