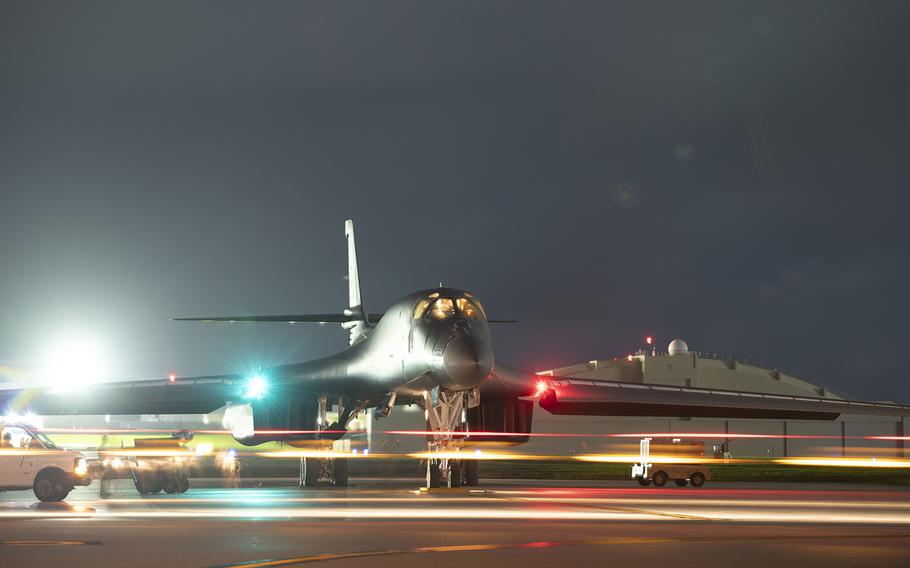 A pair of Lancers and 170 airmen from the 37th Expeditionary Bomb Squadron, 28th Bomb Wing, at Ellsworth Air Force Base, S.D., arrived on Guam less than a month ago. The Air Force did not disclose the intended length of the deployment.

On Friday, one of the bombers launched from Andersen Air Force Base on to train with eight Mitsubishi F-2s and six F-15 Eagles from the Japan Air Self-Defense Force, the service said in a new release.

“Opportunities to train alongside our joint partners and allies in the region are an invaluable experience for our Airmen,” the squadron’s commander, Lt. Col. Lincoln Coleman, said in the release. “Not only are we able to highlight our continued commitment to our allies, but it also increases our ability to integrate with one another and strengthen our combined capabilities.”

The Lancer also took part in “Joint War at Sea” training that day with the USS Ronald Reagan strike group between Japan and the Korean Peninsula, according to the statement.

Before arriving on Guam, the bombers conducted intercept training in the same area with JASDF F-15J fighter jets, according to a previous Air Force statement.

B-1s were last deployed to Guam in May when they flew in from Dyess Air Force Base, Texas.