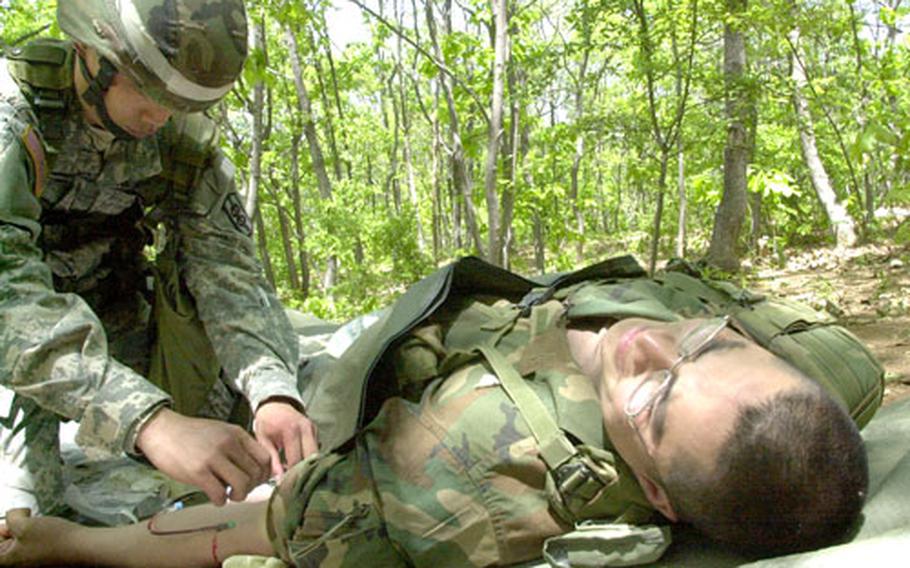 Sgt. Amarin Amnathavon of the 568th Medical Company sticks an intravenous needle into Pvt. Marcus Rios during Expert Field Medical Badge training at Warrior Base recently. Usually, fewer than 10 percent of those who take the EFMB test earn the badge. (Erik Slavin / S&S)

WARRIOR BASE, South Korea — Of the many badges and ribbons awarded in the military forces, few instill confidence among America’s war-fighters like the presence of an Expert Field Medical Badge on their medic’s chest.

Last year, just 4.5 percent of those who tried out for that designation in South Korea were successful.

Course officials say they hope this past week’s applicants will do better — but anything more than 10 percent would be a surprise.

To pass, soldiers must properly treat and quickly transport casualties amid a mock combat environment that nonetheless, the Army labors to make seem authentic.

“It’s as real as you can get without killing somebody,” said Sgt. 1st Class Arnold Hill, noncommissioned-officer-in-charge of the test’s emergency medical treatment lane.

Even before the field medical tests begin, soldiers must pass day and night land navigation tests and a 100-question written exam.

The medics then move to the testing lanes. To earn the badge, they must complete 75 to 80 percent of their tasks proficiently on each phase.

Soldiers must complete eight of 10 tasks, including treating open head and chest wounds.

Meanwhile, support soldiers act as opposing forces, detonating explosives and firing hundreds of blank rounds while the medics patch up the soldiers in a dense forest.

“Our objective is to put as much stress on the medics as we can, to make them remember this,” said Spc. Derrick Overby. “A lot of times, they won’t even see us coming. We pop up, fire a few shots, then we’re gone.”

During the litter obstacle course, soldiers form groups and carry casualties through muddy trenches, past walls and through barbed wire. They move on to other lanes, where they must assemble communications equipment, call for an evacuation and load a casualty into an Army Black Hawk helicopter. For the remaining few still in the running, the week ends with a 12-mile rucksack march.

The field tests are a far cry from the modern equipment and preparation of the operating room, where badge hopeful Staff Sgt. Veronica Charatain works at the 121st General Hospital.

“I’m used to everything being sterile,” she said. “Here, you get there with what you have and you get [it] done.”