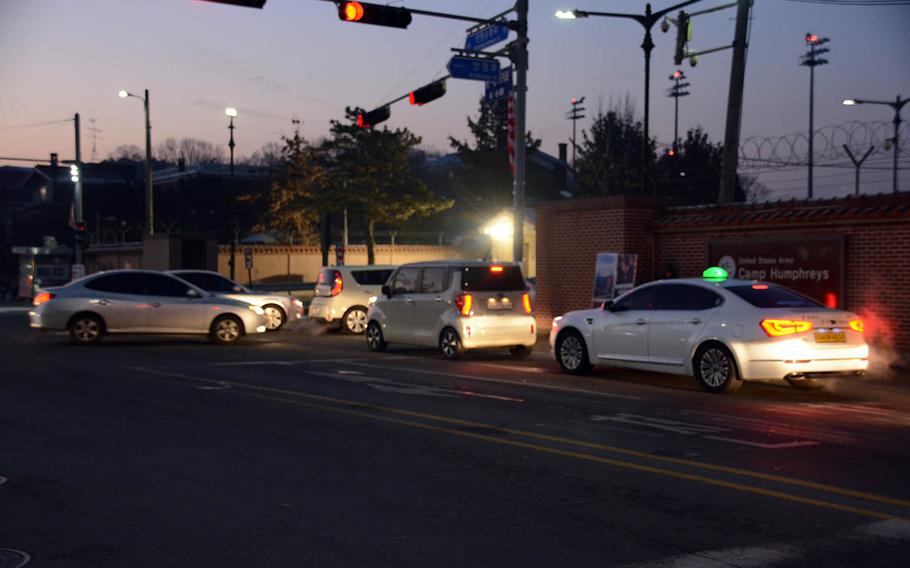 Buy Photo
Cars line up in the morning to enter Camp Humphreys in the rural area of Pyeongtaek, South Korea, Friday, Jan. 18, 2019. Traffic jams are posing a major headache for the growing population on the recently expanded Army garrison. (Kim Gamel/Stars and Stripes)

CAMP HUMPHREYS, South Korea — Traffic jams are posing a major headache for the growing population on Camp Humphreys, the U.S. military’s new headquarters in South Korea, with many complaining about a dearth of access gates and guards to man them.

Lines of cars are frequently backed up for several blocks on the roads outside and inside the Army’s largest overseas base as drivers wait to file through sometimes a single lane during rush hours. Scanners used by the guards to check IDs often don’t work promptly, causing even more frustration.

One man was injured when the grab barriers deployed as he was driving through one of the access points in November.

“It is out of control,” said Elyse Hendriksen-Bannon, who must battle traffic twice in the morning to get on post – first when she takes her husband to work and later to take her 13-year-old son to the middle school.

The garrison responded to the complaints by borrowing soldiers from the Eighth Army to increase the number of scanners and ease congestion at the two most-used vehicle gates known as Anjeong-ri and Dongchang-ri.

But commander Col. Scott Mueller said Friday that was a stop-gap measure and the soldiers had to return to their units for regular duty.

He called for patience, saying the number of guards and gates is out of his hands and a request for additional funds to hire more gate security staff had been denied by Installation Management Command. He promised another traffic study would be conducted in February/March.

“It is important to note that USAG Humphreys does not control the security guard contract,” he said, recommending that people drive to less-used gates known as Dodu-ri and Hamjeong-ri when possible.

The inconvenience, which some worry also is a safety hazard, is a side effect of the base’s rapid expansion to accommodate a push to finally implement the problem-plagued relocation of most U.S. forces south of Seoul.

The three main commands — U.S. Forces Korea, Eighth Army and the 2nd Infantry Division — have all moved to Camp Humphreys, nearly tripling the population to more than 32,000, compared with 12,000 in 2017.

Most Americans and South Korean employees live off post and need to commute to work and to drop kids off at school.

But the walled-off compound, which is spread over some 3,500 acres in the rural area of Pyeongtaek, has only five access gates that are staffed by guards employed by a local contractor. One of those is for pedestrians only, while two others have limited hours and are closed on weekends.

Traffic woes have been a constant complaint at community town halls since the moves from Seoul and areas to the north began in force two years ago, transforming the former remote helicopter outpost into something resembling an American suburb.

A social media backlash erupted this week when the garrison posted a cryptic message on its Facebook page warning that things were about to get worse “due to the gates having less capability to scan/check garrison personnel’s entry.”

“Are we to take to the skies and parachute in?” one commenter wrote.

Mueller explained Friday that more delays were expected because the soldiers who had been helping had to return to their units “in order to maintain their ‘fight tonight’ readiness.”

The use of soldiers was “a bridging strategy, while we conducted an additional traffic study and submitted the data to the Installation Management Command … along with our concerns about transit times and vehicle congestion outside of our gates, in an effort to get funding for additional contract security guards,” Mueller said in a statement posted Friday.

“This request was denied,” he said. “We do not have funding with our budget to hire additional guards on our own, and the number of gates we can operate is determined by the number of guards we have.”

Hendriksen-Bannon, 45, who has been based at Humphreys with her family for two years, said traffic is already heavy shortly before 6 a.m. on most days.

“At the main gate, you have people driving down the wrong lane and everybody’s trying to jockey for position,” she said. “You can’t even get around it to go to other gates from where we are because you’ve got traffic on the main road.”

• Anjeong-ri gate: Open 5 a.m. to 2 p.m. for all lanes entry and exit; 2 p.m. to 10 p.m. one entry lane only for DBIDS-registered POVs, contract vehicles, bikes and motor bikes; all exit lanes. Closed weekends and American holidays.