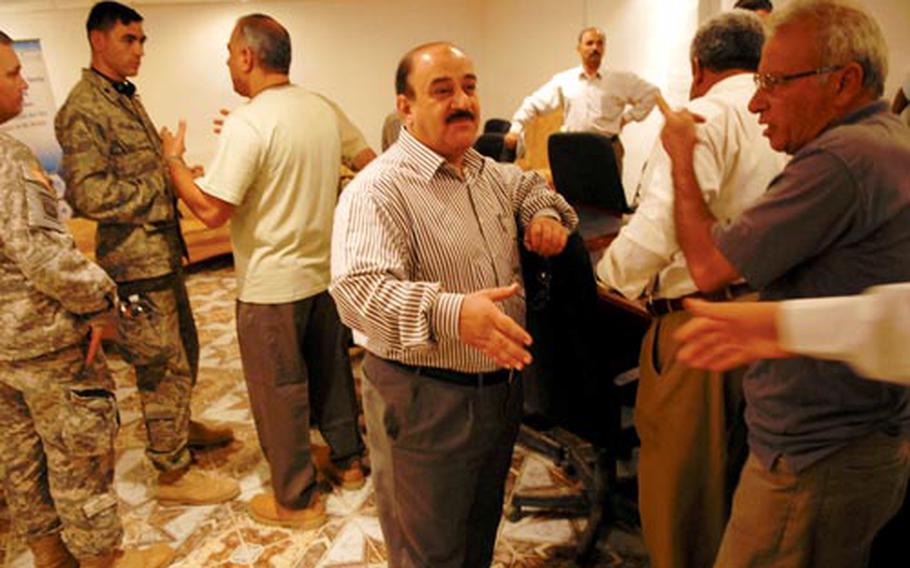 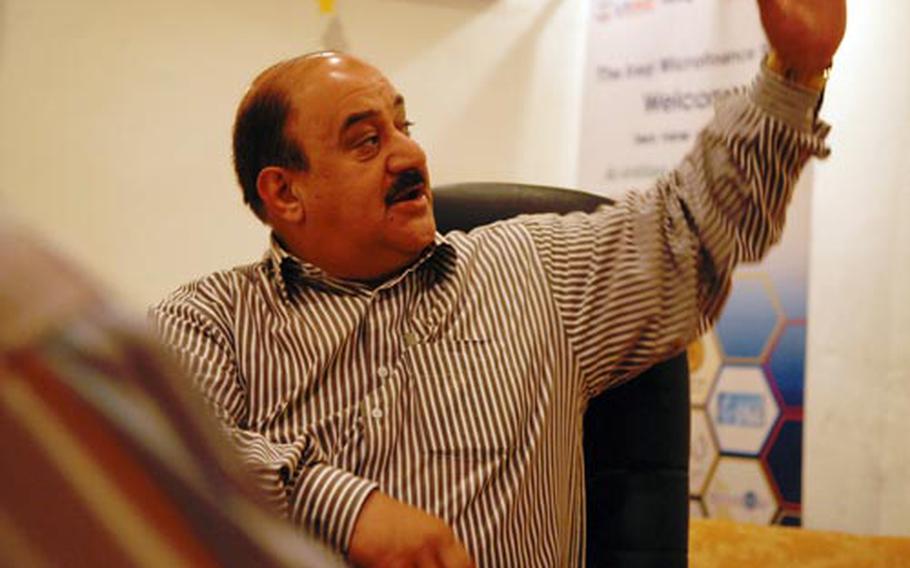 Ayadah, one of the few Awakening officials currently holding political office, has announced his plans to run for provincial governor in this fall&#39;s elections. U.S. officials greet the Awakening&#39;s national ambitions warmly, but the party will face major challenges as it works to transcend its Sunni tribal roots. (Michael Gisick / S&S)

RAMADI, Iraq - As appearances go, the mayor of Ramadi doesn&#8217;t exactly look like a natural heir to the legend of Sheik Sattar Abu Risha, the dashing young tribal leader with the revolver at his hip, who brought his tribesmen to fight beside the Americans in the darkest days of the insurgency.

Wearing a bulky sport coat and slacks, a few strands of black hair pulled over the wide squat oval of his head, the mayor, Latif Obaid Ayadah, has all the physical dash of a midlevel technocrat. But as the "Awakening" movement founded by Sattar, who was killed by a car bomb last year, works to transform itself into a national political force ahead of elections expected this fall, Ayadah is exactly the kind of leader it&#8217;s trying to attract: Educated if unspectacular, with tribal roots but also urban connections. In a word, a technocrat.

"There&#8217;s a misconception that the Awakening is made up only of sheiks who haven&#8217;t been to school," Ayadah said during a recent visit to the main American base in Ramadi. "That is not the case. We have a vision not just for Anbar, but for all of Iraq. We know what the grass roots needs and we know how to do it."

And, he added, "We will stop Iran from taking over our country."

With its platform of economic populism, an open embrace of the U.S. presence in Iraq and consistently strident rhetoric toward Iran, it&#8217;s probably no surprise that the Awakening&#8217;s national ambitions are viewed by many American officials here with barely concealed glee.

"They want to be the Kuwait of Iraq," said Sterling Jensen, a civilian foreign areas officer with the U.S. Navy, referring to the smaller Gulf state&#8217;s pro-U.S. foreign policy.

To come anywhere near national power, however, the Awakening will have to expand its support well beyond its base among Anbar&#8217;s Sunni tribes, and even military officials acknowledge that it faces a difficult electoral map. Sunnis make up less than 25 percent of Iraq&#8217;s population, and convincing significant numbers of Shiites to back a Sunni-led party, less than two years after sectarian violence nearly threw the county into full-scale civil war, remains a tall order.

"I think they understand they&#8217;re going to be in the opposition to start," said Marine Corps Maj. Adam Strickland, a liaison officer for governmental affairs. Still, Strickland said he was optimistic about the movement&#8217;s prospects of forming a national base, calling it "very possible, even likely, that you&#8217;ll see tribes in the south link with tribes here.

"They think that if they get in, they&#8217;re going to be so popular that they can take over the Iraqi government by the ballot box," he said.

Others outside the military expressed far less rosy views of the Awakening&#8217;s prospects.

"There&#8217;s zero likelihood of Shiite tribes delivering any province to a party part of which is made up of Sunni ex-Baathists and ex-al-Qaida," said Juan Cole, a Middle East expert at the University of Michigan.

Parties that ran on a technocratic, non-ethnic platform in the 2005 election, including ones led by American-favored politicians like Ahmed Chalabi, failed to win "even a single seat in parliament," Cole noted.

As the Awakening embarks on what in American politics might be called a "re-branding" drive to become exactly that sort of technocratic, nonethnic party &#8212; reaching out to Shiite tribal leaders in the south and to urban Iraqis for whom tribal ties have weakened &#8212; one thing is clear: The fall elections will provide a significant reality check.

Exactly when and how that test will play out remains uncertain. A tentative date has been set for Oct. 1, but the election law is stalled in the Iraqi parliament. It will be Iraqis&#8217; first chance at the polls in nearly four years, and much has changed since 2005.

Nowhere is that more true than in overwhelmingly-Sunni Anbar province. During the last elections, when the province was busy with insurgency, just 3,000 Anbar residents braved the polls. Now the province is among Iraq&#8217;s most peaceful, and U.S. officials expect a turnout in excess of 500,000.

In Anbar, both the Awakening Party and the moderate Iraqi Islamic Party, which currently holds most provincial seats, are actively recruiting candidates, as are a half-dozen smaller parties. Ayadah, who as an appointed mayor is one of the Awakening&#8217;s few incumbents, is running for governor.

There is a wide sense among U.S. officials in Anbar that most Iraqi Islamic Party incumbents, elected by less than 1 percent of voters in the first place, face an uphill struggle.

"They don&#8217;t have a public mandate and a lot of them are seen as being pretty self-interested," Strickland said.

A prominent member of the Iraqi Islamic Party in the province recently left the party to embark on an independent candidacy, a move many see as a sign of the times. Rightly or wrongly, officials say, the Iraqi Islamic Party is held responsible for what many see as the slow pace of progress in Anbar, and in particular the often halting efforts of the Iraqi government. Buoyed by the "wasta" of improved security, meanwhile, the Awakening appears poised to capitalize at the polls, officials say.

While the fall elections will provide clues to the Awakening&#8217;s ability to build support outside Anbar, the party&#8217;s more immediate challenge will remain here.

Cole said the party could do well in Anbar, as well as in Diyala province, but cautioned that it will still face a forceful challenge from the Iraqi Accord Front, the Sunni political alliance that includes the Iraqi Islamic Party.

And beyond its larger ambitions in the coming elections, U.S. officials said, the future prospects of the Awakening even as a Sunni party will likely be defined by its performance if it takes power here.