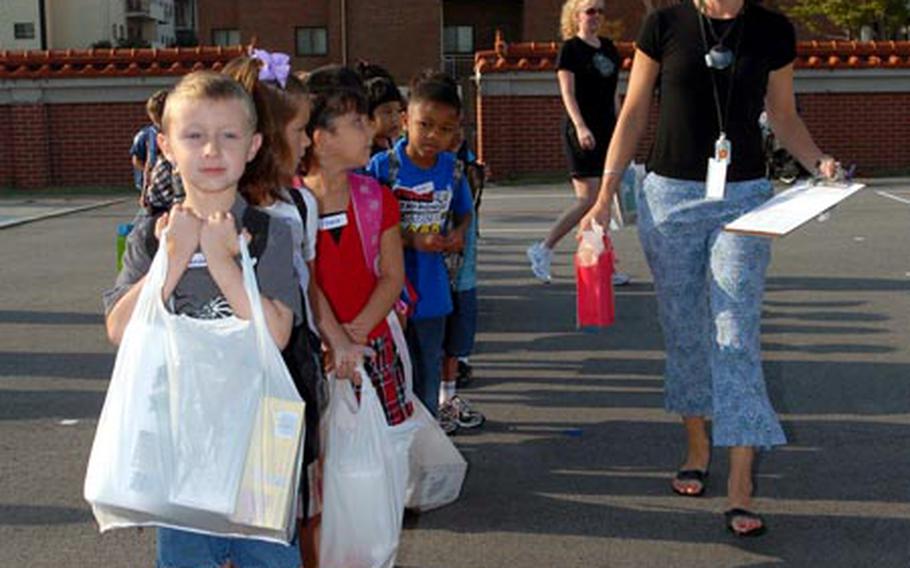 PYEONGTAEK, South Korea &#8212; Camp Humphreys has its first middle school, and with it a new school name.

What is now called the Humphreys American School has 340 students, enrolled in Sure Start through eighth grade, and is part of the Department of Defense Dependents Schools system.

The change took effect with the Aug. 25 start of the new school year.

Before the change, the installation&#8217;s only school was the Humphreys American Elementary School.

With their own middle school on post, students no longer face a daily bus commute to classes at Osan Air Base, according to Robert McElroy, spokesman for the U.S. Army Garrison-Humphreys.

"It&#8217;s easier for the families, for transportation," he said. "And it just keeps the community intact. So our kids aren&#8217;t over at Osan, 25 or 30 minutes away. It&#8217;s very easy for kids to just walk to school in the morning rather than having that bus ride to Osan and back."

The middle school classrooms and those of the elementary school&#8217;s sixth grade are housed in a single building on what&#8217;s now called the South Campus, near the post&#8217;s fire station and Youth Services Center, McElroy said.

"It will also give us increased room, so that when we increase the number of family members, then we&#8217;ll have more room for them in the school."

Construction is under way at Osan on a new middle school set to open in June and big enough for up to 350 students, Summers said.

Adding a middle school at Humphreys reflects an ongoing move toward normalization &#8212; equipping the post to serve families after decades of catering mostly to soldiers on one-year, unaccompanied tours.

Humphreys is to triple in size and become the U.S. military&#8217;s chief installation in South Korea in coming years.

The expanded post is to eventually have a high school, a middle school and four elementary schools, McElroy said.