Groups at odds with Pentagon over e-mail ballots 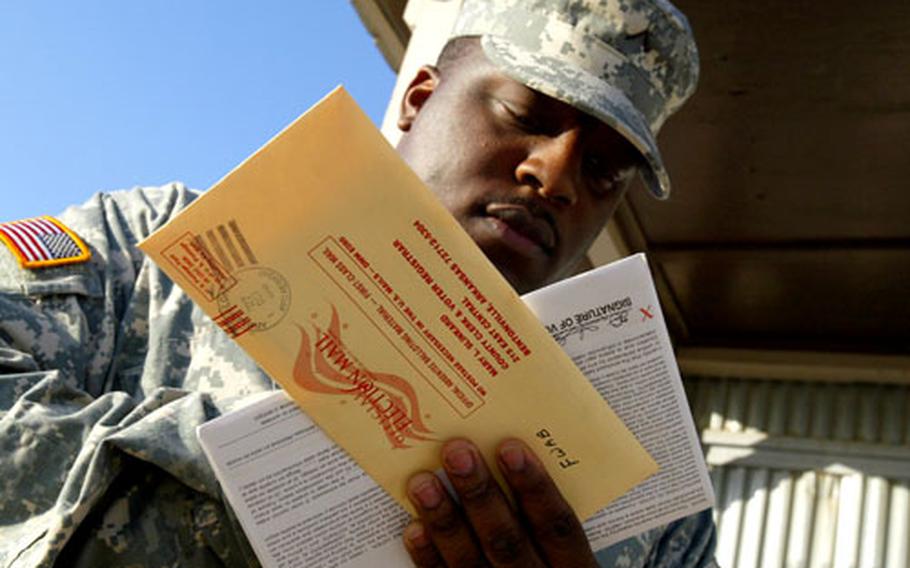 Pvt. Samuel C. Jackson, 26, of The Colony, Texas, holds his absentee ballot before he mails it from a post office at Camp Bondsteel in eastern Kosovo last week. (Visar Kryeziu / AP)

Army Sgt. Joshua Payne might have voted in the 2004 election. But a deployment to Iraq got in the way.

Anyone who has worn the uniform knows the difficulties of voting overseas.

So the Defense Department&#8217;s Federal Voting Assistance Program (FVAP), which supervises voting for Americans overseas, shopped a program to stateside election authorities this year that would allow jurisdictions and voters to send ballots and voter information via unencrypted e-mail.

Eight states agreed to receive e-mailed ballots from overseas voters, Dr. David Chu, undersecretary of defense for personnel and readiness, told the Senate Armed Services Committee in September. But concerns over privacy, personal security and vote tampering have critics crying foul over the DOD-sponsored initiative, warning that voting by e-mail is an unsecure process that could lead to identity theft or vote tampering.

Bob Carey, a senior fellow with the National Defense Committee, a private group that advocates for military voting rights, said he is not surprised that most states rejected the plan.

But FVAP officials say voting by e-mail this year is a matter of offering an imperfect system or no alternative at all to paper ballots. And with so many troops in places where a paper ballot might not reach them, this is the best route for now, said Scott Wiedmann, FVAP&#8217;s deputy director.

Voters who opt to send a completed ballot by e-mail or fax are warned of the potential security and privacy issues, he said. More states now allow faxing completed ballots, which has been in practice since the Persian Gulf War.

Previous FVAP initiatives to further the vote-by-e-mail option for military voters also have failed, critics contend. In 2004, a similar program was canceled after an oversight committee raised questions about security. Those same security issues have been raised this year, but the program remains.

&#8220;After every election, DOD seems to immediately forget that there is another election coming up, and then it runs to create some new system at the last minute, which is untested and doesn&#8217;t work as advertised,&#8221; U.S. Rep. Carolyn Maloney, D-N.Y., said in a statement. Other lawmakers also expressed concern over the program.

The price of securityAn independent DOD review in August raised concerns about the security of e-mailing votes, among them identity theft and the possibility of vote tampering.

&#8220;The threat should not be underestimated,&#8221; the report states. &#8220;There are serious vulnerabilities in transmitting personal identification information or voting materials over the Internet. &#8230; [The] unecrypted transmission of name, Social Security number, date of birth and address should not be encouraged under any circumstances.&#8221;

However, 87 percent of servicemembers surveyed in a focus group said they were likely to vote over the Internet if security were adequate, a Government Accountability Office representative told the Senate Armed Services Committee in September.

If the system for sending ballots by e-mail is not yet secure, the DOD shouldn&#8217;t be advocating it, said Susan Dzieduszycka-Suinat, executive director of the Overseas Vote Foundation, a nonprofit group that helps overseas voters.

Today&#8217;s technology cannot guarantee the security of a vote e-mailed through conventional channels, said Dr. David Wagner, a computer science professor at the University of California-Berkley who recommended scrapping the similar 2004 program over security concerns and who again issued a report this year with other experts criticizing e-mail voting.

Wiedmann said that FVAP will continue to look for ways to make the nonpaper ballot a viable option. Furthering the e-mail voting concept will have to wait until the federal Election Assistance Commission releases its standards for Internet voting, which Wiedmann said he doesn&#8217;t expect in time to affect the 2008 election process.

&#8220;At this point, there&#8217;s sadly not much that officials can do about these problems before the November election, except cross their fingers and hope for the best,&#8221; Wagner said.

Looking for your election fix?

WASHINGTON &#8212; With just a few days to go before the midterm elections, plenty of news and political Web sites have begun to ramp up their coverage.

Prominent news sites, such as www.cnn.com and www.foxnews.com, will provide real-time results of the major congressional and gubernatorial races on election night, but a number of the sites are already posting the latest on the political landscape:

www.electoral-vote.com: &#8212; The Electoral Vote Project, launched during the 2004 presidential election, offers up-to-date polling information on critical House and Senate races. Links from the site direct visitors to Democrats Abroad.www.realclearpolitics.com: &#8212; This site features mainly conservative analysis and commentary, but also offers poll data for the last month in the most competitive House, Senate and gubernatorial races.www.nytimes.com/..: The New York Times election site provides an interactive map for visitors to see what the makeup of the next Congress could look like.www3.capwiz.com/c-span/e4: C-Span&#8217;s election site features breakdown of the federal and state office races, including biographies of the candidates and links to their Web sites.www.thegreenpapers.com: This nonpartisan site offers a breakdown of the congressional seats up for election, the current breakdown of Congress, and general information on the election process.www.nass.org: The National Association of Secretaries of State Web site offers links to all 50 state election sites, most of which will be providing updates on local results throughout Tuesday night.www.pollingreport.com: This paid subscription site has plenty of free polls posted, including ones on generic questions about the major political parties and an early look at the 2008 presidential election.&#8212; Leo Shane III