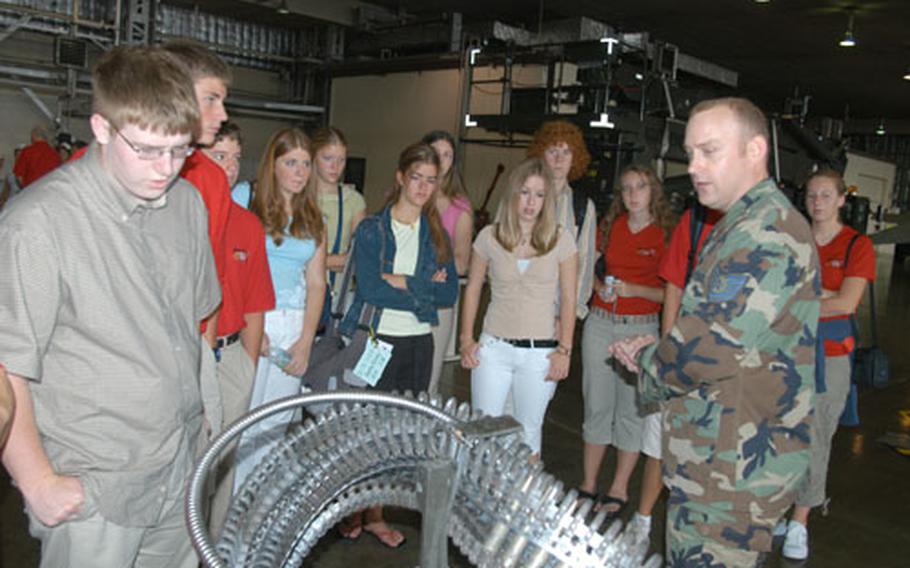 Tech. Sgt. Chance Nichols, a lead standardization crewmember with 35th Maintenance Group at Misawa Air Base, Japan, shows students from Wenatchee, Wash., ammunition for an F-16. A delegation of students, parents and civic leaders from Wenatchee, Misawa&#39;s sister city, visited Misawa last week, stopping by the base Friday for a tour and lunch. (Jennifer Svan / S&S)

Tech. Sgt. Chance Nichols, a lead standardization crewmember with 35th Maintenance Group at Misawa Air Base, Japan, shows students from Wenatchee, Wash., ammunition for an F-16. A delegation of students, parents and civic leaders from Wenatchee, Misawa&#39;s sister city, visited Misawa last week, stopping by the base Friday for a tour and lunch. (Jennifer Svan / S&S) 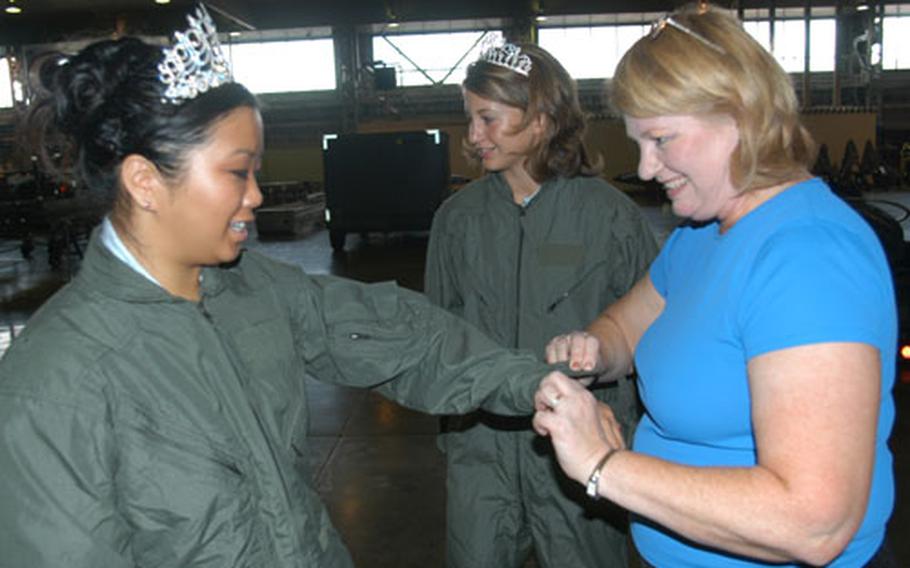 Debra Lacy helps Ashley Armstrong (left) and Stephanie Gay try on a flight suit at Misawa Air Base, Japan, on Friday. The three were part of a delegation of students, parents and civic leaders from Wenatchee, Misawa&#39;s sister city, visiting Misawa last week. The two cities have hosted international exchanges with each other for more than 20 years. (Jennifer Svan / S&S)

MISAWA AIR BASE, Japan &#8212; A group of Americans from Washington state is working with Misawa city officials to bring attention to the first nonstop trans-Pacific flight.

In 1931, Clyde Pangborn and Hugh Herndon Jr. took off in Bellanca &#8220;Skyrocket&#8221; airplane from Sabishiro Beach in Misawa, and 41 hours and 15 minutes later landed in Fancher Field in Wenatchee, Wash.

The feat was the basis for a friendship that developed years later between the two cities, both of which now send delegations to each other&#8217;s countries every year for a week of cultural exchange.

Thirty-two civic leaders, parents, teachers and students from Wenatchee arrived in Misawa last week and stayed with host families. They also toured Misawa Air Base on Friday, where they ate lunch with servicemembers, tried on flight suits and saw an F-16 up close.

In Misawa city, the Americans slept on futons, ate miso soup, learned about proper tea ceremony etiquette and practiced writing kanji &#8212; all because of one flight more than 70 years ago.

And while that Pacific jaunt holds special meaning for two cities on opposite shores, Pangborn and Herndon &#8212; unlike Charles Lindbergh, the first pilot to cross the Atlantic Ocean solo &#8212; are virtual unknowns, said Bob Parlette, a pilot and Wenatchee attorney who was among the Washington state delegation.

Parlette and the Spirit of Wenatchee Committee want to change that. Parlette led efforts by Wenatchee&#8217;s local chapter of the Experimental Aircraft Association to rebuild a replica of Miss Veedol, the name given to Pangborn and Herndon&#8217;s plane. It took five years and more than $400,000; Misawa donated about $70,000 to the cause and a Tokyo businessman gave about $250,000, Parlette said.

The Spirit of Wenatchee Committee now wants to reenact Pangborn&#8217;s and Herndon&#8217;s journey around the world, including the trans-Pacific flight from Misawa to Wenatchee; Parlette notes that the pilots fell short on their attempt to circle the globe.

Committee members hope to launch the Miss Veedol replica, with a retired Air Force pilot at the controls, from Misawa next summer. But Parlette concedes it might not be until 2006, since the committee is having trouble acquiring liability insurance for the plane in certain countries.

Parlette said that by reenacting the flight, the committee wants to give Pangborn and Herndon their due place in the history books and strengthen the ties between the people of Japan and Wenatchee.