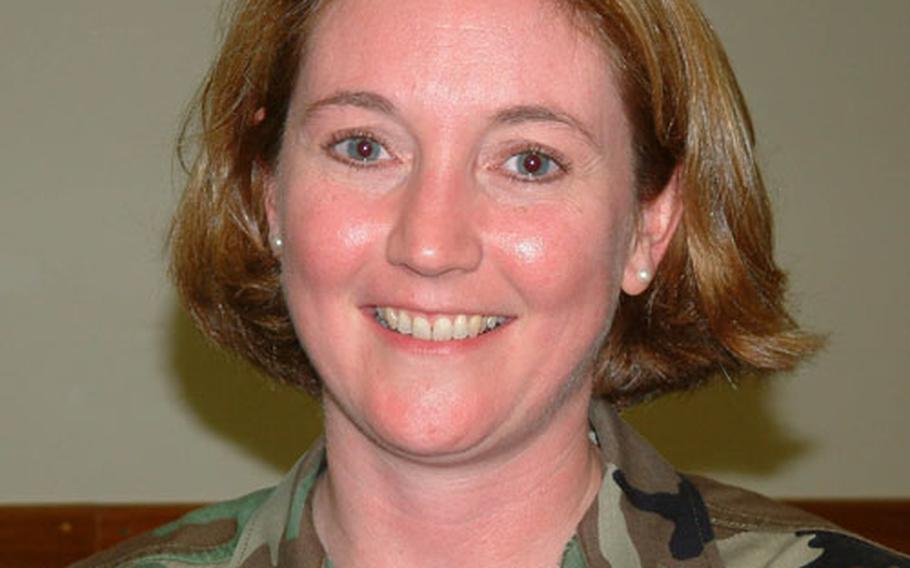 KADENA AIR BASE, Okinawa &#8212; Every year since 1982 an unidentified house on this sprawling air base has been a refuge for domestic violence victims.

Last year it was occupied for 140 days by someone from a military family needing refuge from an abusive home environment, said Capt. Samantha Blanchard, director of Kadena&#8217;s Family Support Center.

&#8220;The shelter was born out of an increasing awareness within the military community of the problems associated with domestic violence,&#8221; said Blanchard, a certified social worker, during a recent interview to announce the Joint Services Family Shelter&#8217;s preparations for National Domestic Violence Awareness Month in October.

The shelter is located in a base housing area and includes a family room, teen room and a singles room, Blanchard said. With room for 16 people, the shelter is available to anyone 12 years and older who is referred by a family advocacy office. Children younger than 12 must have a non-offender sponsor stay with them.

The services jointly fund the program, which includes three help lines, on a percentage based on utilization by commands for the past three years. The Air Force averages half, with the Marines and Navy each contributing about 20 percent, Blanchard said. The 2005 projected budget is $240,000.

That pays for the shelter, the help lines and a full-time staff of eight.

According to the Justice Department, estimates of domestic abuse range from 960,000 incidents of violence against a current or former spouse, boyfriend or girlfriend to 4 million women who are physically abused by their husbands or live-in partners each year.

In the United States domestic violence victims usually check in to a shelter as a last resort, said Blanchard.

Shelter referrals typically are afraid to stay in the home of the abuser, she said. &#8220;It can range from verbal, mental or physical abuse,&#8221; she said. &#8220;What we typically see is minor cases of pushing and shoving. Since I&#8217;ve been here there have been no broken bones or anything like that.&#8221;

A shelter stay provides a cooling off period allowing the people involved in the case, including family advocacy case managers, to find a solution to the problem.

She said the typical stay is about seven days. Men are allowed to stay in the shelter as long as there are no women also staying there, Blanchard said.

To get the word out about domestic violence on Okinawa, the Joint Services Family Shelter is sponsoring a 5K Run/Walk Oct. 2 at Kadena Air Base&#8217;s O&#8217;Connor Gym.

&#8220;The purpose of this event is to create awareness for the issue of domestic violence within our community,&#8221; said Savannah Lohn, a shelter outreach representative. &#8220;Our goal is to interrupt the cycle of domestic violence and provide shelter for those experiencing family crisis.&#8221;

Lohn, who has five years of experience working at homeless shelters in the United States, said the Okinawa program is the best. &#8220;We have a real dedicated corps of volunteers; that shows how supportive the military community is of what we do,&#8221; she said.

The volunteers are carefully screened and receive two days of training, she added.

Regina Lucero, a social services assistant, said the help lines are the busiest part of the program.

Persons interested in the 5K Run/Walk event can call DSN 634-7221 for more information or to volunteer. The event will begin at 7 a.m. with an opening ceremony, and the run/walk will start at 8 a.m. The event is free and there will be a raffle for prizes at the end, Lucero said.