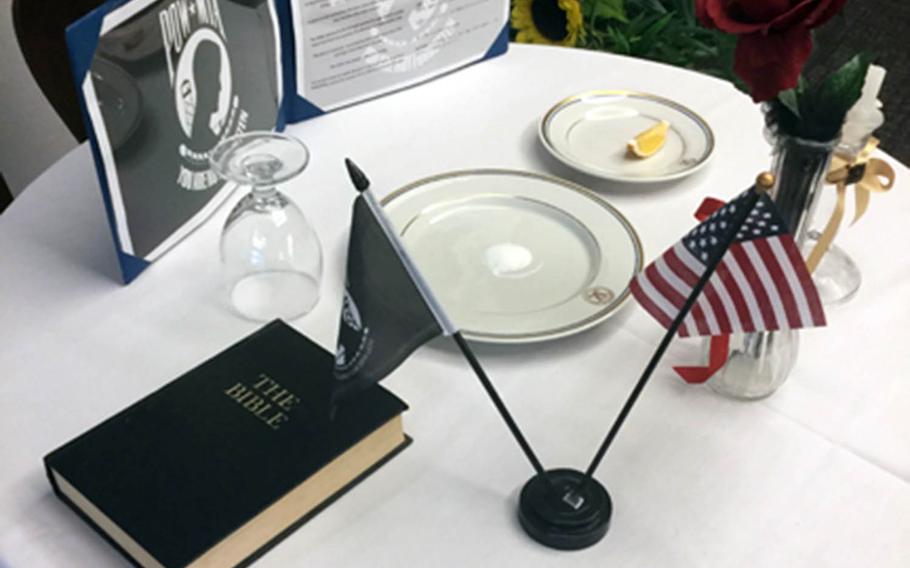 A Bible included in a POW/MIA display at U.S. Naval Hospital Okinawa has drawn complaints from the Military Religious Freedom Foundation. (Courtesy of MRFF)

CAMP FOSTER, Okinawa – An organization that lobbies against promoting religion within the Armed Forces has filed an inspector general complaint against the U.S. Navy over a Bible that was included in a POW/MIA “Missing Man” table display at the U.S. Naval Hospital Okinawa.

The complaint seeks removal of the book from the display, eliminating language about the Bible and the phrase “one nation under God” from an accompanying explanatory placard, an investigation into how the book came to be displayed, who authorized it and “appropriate disciplinary measures administered to those responsible.”

It was filed Tuesday by the New York-based law office of Donald Rehkopf Jr., on behalf of the Military Religious Freedom Foundation and 26 families on Okinawa.

MRFF first filed a complaint about the display with Rear Adm. Paul Pearigen, Navy Medicine West commander, on April 5. The Navy later said it investigated the matter but found that including the Bible was “consistent with Department of the Navy and Department of Defense guidance, as well as the U.S. Constitution.”

The dispute over the display began when a group of sailors, Marines and Department of Defense civilian employees stationed on Okinawa reached out to MRFF, asking for help get the Bible removed, according to Mikey Weinstein, founder and president of the MRFF.

Weinstein, a former Air Force judge advocate general and Reagan administration lawyer, contacted hospital officials and asked them to remove the religious items. He said a Navy JAG assigned to the hospital refused to do so without permission from the hospital commander, Capt. Cynthia Kuehner, who was away on temporary duty assignment.

MRFF lawyers then sent a complaint to Pearigen, citing the First Amendment’s Establishment Clause. The lawyers argued that the First Amendment not only forbids the government from establishing an official religion but also prohibits government actions that favor one religion over another. They also cited DOD and Navy regulations. Pearigen refused to remove the book. Weinstein and MRFF asked that Pearigen reconsider and asked that holy books of other religions be displayed.

The official Navy or Defense Department stance on Bibles being included in POW/MIA “Missing Man” table displays remains unclear. However, a report on the Navy’s website from 2014 describes the Bible as being an official part of the display.

The fight to remove religious articles from POW/MIA “Missing Man” tables is nothing new for MRFF. The group has been successful in other cases, the latest in November when it forced the Denver VA Medical Center to remove religious items from a display.