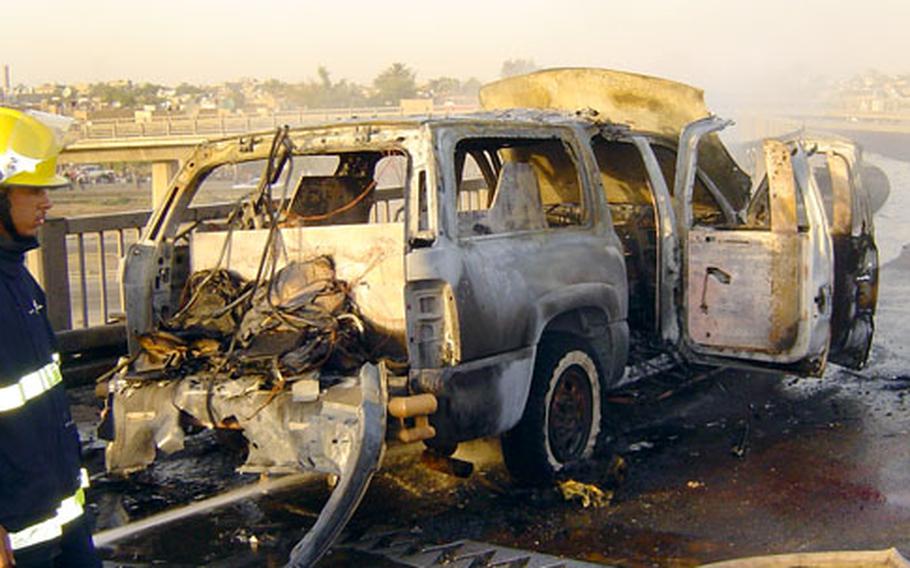 A private contractors’ vehicle was hit by a roadside bomb, killing three men in May 2005. (Photo courtesy of Jaco Botes)

An association of contractors in Iraq and other combat zones has set out to provide members legal and moral support and &#8212; more generally &#8212; dispel the notion that the profession is &#8220;a bed of dollar bills.&#8221;

The International Contractors Association already has more than 400 members ranging from security detachments to information technology professionals to logistical and medical personnel, said Jaco S. Botes, association founder and a personal security operator in Iraq since 2004.

&#8220;First and foremost, ICA&#8217;s goal is to establish a global support forum for international security contractors, where they experience a sense of belonging, industry support and purpose which were lacking previously,&#8221; Botes said from Baghdad.

The association was founded in October and strives to provide job information, industry news and &#8220;negotiate group benefits that are not provided by the employers of security contractors,&#8221; Botes said.

A recent Pentagon &#8220;census&#8221; found that as many as 100,000 private contractors work in Iraq itself, let alone Afghanistan and other flashpoint countries. At least 20,000 are armed security operators.

Nearly 800 have been killed since the war in Iraq began.

But contractors have also come under heavy criticism for the ways they operate, particularly in Iraq. U.S. troops and contractors in Iraq have sometimes run afoul of each other.

In one infamous incident in May 2005, Marines detained 16 contractors &#8212; all of them former U.S. military personnel &#8212; for three days. The contractors said they were subject to abuse and humiliation, in part for their presumed salaries. The Marines said the contractors had fired on one of their guard towers. The contractors were later released without charge.

In 2004, L. Paul Bremer, then-head of the Coalition Provisional Authority, granted contractors immunity from Iraqi law. There is now a move afoot to bring them under the Uniform Code of Military Justice.

And in some instances, contractors are now accused in civil litigation for alleged wrongful killings and cover-ups. It&#8217;s that image the ICA, in part, wants to challenge.

The priority &#8220;is to attract members who are serious about professional conduct, and ideally eliminate the public image of security contractors being cowboys for hire or mercenaries running wild,&#8221; Botes said.

&#8220;If you happen to be one of those contractors who think you are doing something illegal, or you fancy yourself a &#8216;gun for hire,&#8217; please take note that ICA is not a suitable association for you,&#8221; part of its Web site (www.icaonline.us) reads.

The site includes discussion forums and tips on such matters as &#8220;Certified Training Courses&#8221; and &#8220;International Money Matters,&#8221; along with a section devoted to memorials.

A code of conduct pledges its members work only for &#8220;legitimate governments, organizations, NGOs [non-governmental organizations] and lawful private companies&#8221; and &#8220;support reconstructive and peace operations.&#8221;

Members do not pay dues, though that could change.

Johann Steenberg, who has worked close protection details in Baghdad for U.S. military and government officials since 2004, is one of the association&#8217;s members.

Steenberg, by his count, has been in 25 roadside bomb attacks and two rocket-propelled grenade attacks in the past 11 months.

&#8220;A contract worker is exactly that &#8212; your contract can be ended tomorrow and then you can wait six months without income for the next contract,&#8221; he said. &#8220;In some cases, bosses &#8216;skip&#8217; the contract with all the money and disappear, leaving the contractors without a cent in a foreign country. In cases like that, where do you go to complain, the Iraqi police?&#8221;