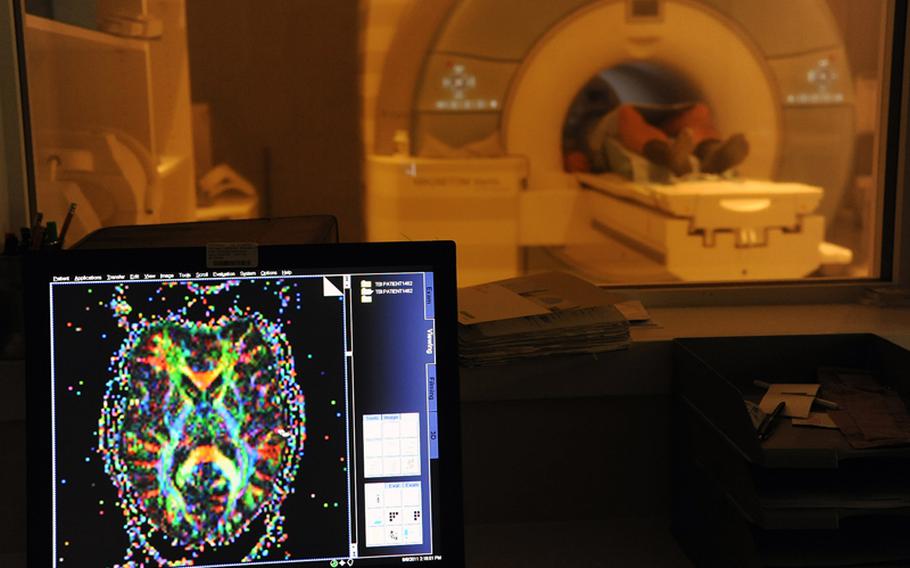 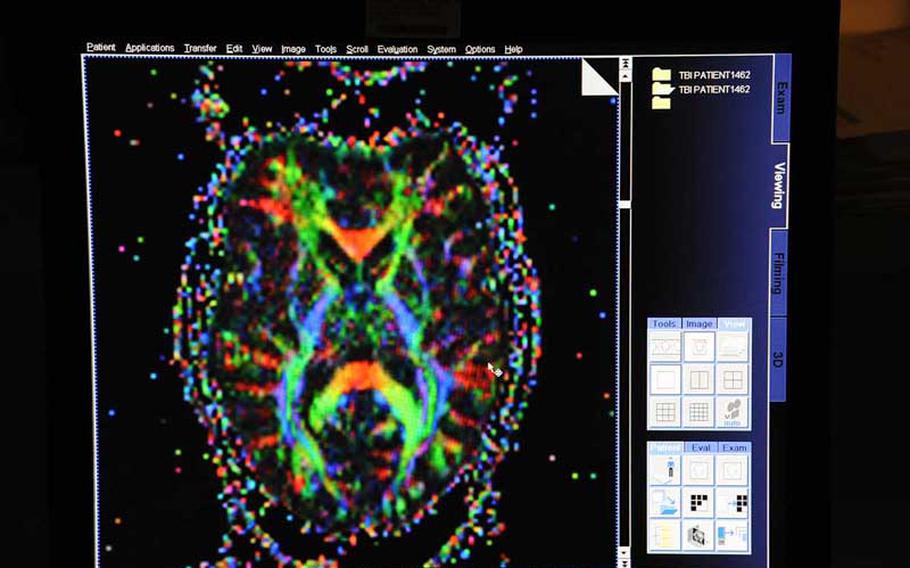 Buy Photo
A Diffusion Tensor Imaging scan of the brain. Diffusion Tensor Imaging, which is a highly-sensitive variation of MRI, tracks the water molecules in the brain to display the white matter tract, the neural connection between cells. The different colors represent the different directions and rates of water diffusion. An abnormal flow can indicate injury. (Michael Abrams/Stars and Stripes) 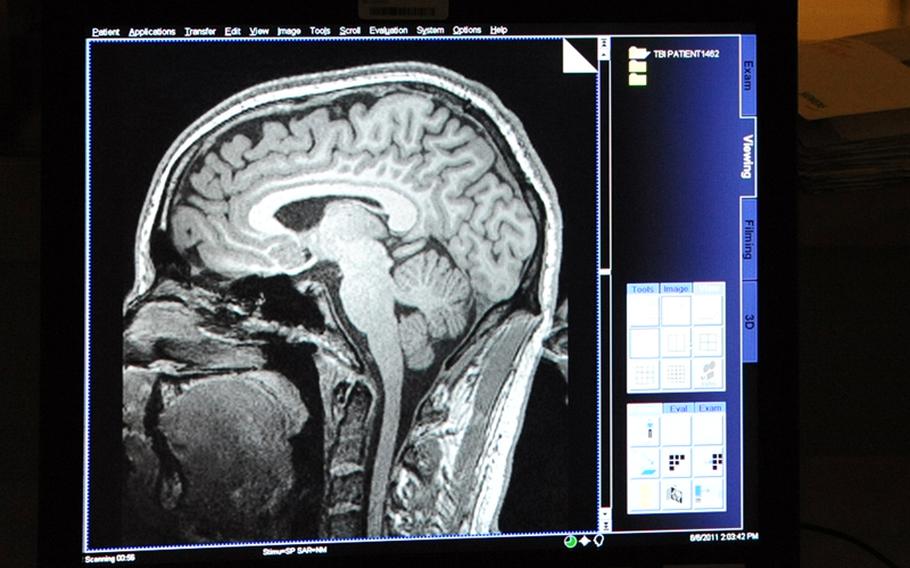 Buy Photo
Image of a typical Magnetic Resonance Imaging scan of the brain. Traumatic brain injuries believed to be associated with blasts are so subtle and elusive that typical MRIs often cannot detect them. (Michael Abrams/Stars and Stripes)

LANDSTUHL, Germany &mdash; During a firefight in Afghanistan&rsquo;s Kandahar province in 2002, U.S. Army Maj. Kevin Kit Parker stood atop a hill awaiting a Medevac flight for an injured soldier when a bomb exploded several miles away.

He saw the bomb&rsquo;s intense light first, then felt its shock waves ripple through his body.

&ldquo;It felt like it was lifting my bowels, and I was quite far away,&rdquo; Parker said.

Several years later, when he was working in bioengineering research at Harvard University, a friend of Parker&rsquo;s suffered a severe traumatic brain injury, and Parker was reminded of his Kandahar experience. Parker chose to shift his focus from cardiac tissue to brain research after receiving encouragement from Col. Geoffrey Ling, a neurologist and program manager at the Defense Advanced Research Projects Agency, or DARPA.

Now a professor at Harvard, Parker has published groundbreaking research describing how blasts injure the brain. Gathering data directly on the battlefield from servicemembers who&rsquo;ve been in close proximity to blasts, he said, will be key to understanding the devastating yet subtle damage caused.

The military currently is fielding several new technologies in Afghanistan to do exactly that. Now:

● Soldiers are being outfitted with high-tech gauges that can detect a blast&rsquo;s severity and alert medics on site that a soldier has been exposed to shock waves.

● Armored vehicles are equipped with sensors that connect to each vehicle&rsquo;s &ldquo;black box,&rdquo; which measures and stores information on blasts.

● Two advanced magnetic resonance imaging units have been sent to Afghanistan, marking the first time such sophisticated diagnostic machines have been used in a war zone. Until now, troops couldn&rsquo;t get MRI scans of their brains before arriving at Landstuhl Regional Medical Center in Germany, the main hub for servicemembers injured downrange.

Military doctors and researchers hope data collected using the technologies will lead to more precise diagnosis of mild traumatic brain injuries. The findings could also influence the design of helmets and body armor to protect against blast waves.

And they could help answer a long-standing question about these injuries: Can servicemembers who are near explosions, but don&rsquo;t receive a blow to the head, still suffer brain damage?

If so, the findings could explain why so many troops &mdash; more than 200,000, according to the latest figures from the Defense Department &mdash; are returning from the Iraq and Afghanistan wars with brain injuries.

&ldquo;We have to do this science, and the soldiers have to be involved,&rdquo; Parker said.

But new research is adding credence to the theory that a blast&rsquo;s shock waves can cause a brain injury. Traveling at more than 1,600 miles per hour after an explosion, these violent waves of air, called overpressures, penetrate the skull and reach the brain, researchers say.

Overpressures have long been known to cause other types of internal injuries, including collapsed lungs. New research suggests that a blast&rsquo;s shock waves can stretch brain cells, causing them to tear, or force the long nerves between brain cells to expand and contract, damaging them, or stretch the blood vessel walls beyond their limit, causing an injury called vasospasms.

To measure the force of blast waves on troops near explosions, DARPA developed a blast gauge. About the size of a watch face and weighing an ounce, the portable blast gauge can be attached to helmets and body armor. Inside it are a microprocessor and sensors that detect the blast&rsquo;s force and measure its overpressures, storing the data until it can be downloaded.

In addition to measuring the bomb&rsquo;s force, the device is designed to give medics attending blast victims an instant read of their exposure to blast waves. The medic inserts a stylus or pen tip into the device, causing a light to flash green, yellow or red. The color indicates whether the blast was strong enough to require the soldier receive further medical attention and rest.

&ldquo;Thank God this is coming out now,&rdquo; Parker said. &ldquo;We can&rsquo;t get this in the field fast enough.&rdquo;

A suite of sensors

The Army&rsquo;s Rapid Equipping Force, tasked with quickly developing equipment for soldiers&rsquo; needs, is developing a series of sensors, called the Integrated Blast Effects Sensor System, or IBESS, that can send and retrieve information from a &ldquo;black box&rdquo; inside an armored vehicle. A computer chip would be placed inside the collar of a soldier&rsquo;s body armor, which can receive signals from a series of sensors that are placed inside the helmet and on a servicemember&rsquo;s chest, back and shoulder. The sensors have accelerometers that can measure the unique forces placed upon a soldier in a blast, said Peter Newell, director of the Rapid Equipping Force.

&ldquo;It will tell you the angles and speed of the explosion,&rdquo; he said, &ldquo;if the body moves and then suddenly stops.&rdquo;

Similar sensors are also built into the body and seats of armored vehicles, and all the data recorded by the sensors can be downloaded to the vehicle&rsquo;s &ldquo;black box.&rdquo; Most important, new sensors can easily be built and inserted into the system, allowing for the testing of light, fumes and other blast characteristics.

Newell said there is also an effort to tie the data collected by the IBESS to a soldier&rsquo;s medical records.

&ldquo;This way, when a guy is having issues, his doctor then has the ability to search back [in his records] and find whether he had potential strikes,&rdquo; he said. At least 50 vehicles and 100 soldiers in Afghanistan are expected to be outfitted with the sensor suite in March 2012, Newell said.

&ldquo;We are a few years away from leaving Afghanistan,&rdquo; he said. &ldquo;And the opportunity to collect data on these guys is rapidly going away.&rdquo;

MRIs on the front lines

Dr. David L. Brody, a civilian neurologist who has used MRI to study mild traumatic brain injuries among military patients at Landstuhl, said scanning servicemembers in theater is essential because the MRIs need to be conducted quickly; the Army hospital in Germany is more than 3,000 miles and a day or two away, he said. The medical picture among the downrange population also differs from that of evacuees to Landstuhl, who usually have more severe injuries.

Much potential damage may be going unseen among servicemembers exposed to blasts because &ldquo;those that are injured and return to duty, we don&rsquo;t have access to,&rdquo; Brody said. &ldquo;And there are certainly a lot of people in that category.&rdquo;

Brody&rsquo;s research at Landstuhl showed, for the first time, consistent structural damage to the brain after a blast injury.

Diffusion tensor imaging looks at the brain&rsquo;s white matter, which is composed mostly of axons, the &ldquo;electrical wiring&rdquo; between brain cells, Brody said. The imaging examines axons by tracking the diffusion of water molecules within them; an abnormal movement of water may indicate injury.

Brody&rsquo;s study, published in The New England Journal of Medicine, showed axonal injury to two regions of the brain that are not commonly injured in civilian mild traumatic injuries, such as a sports-related concussion, Brody said. And the pattern of damage matched computer simulations of how blasts would likely affect the brain.

What&rsquo;s more, the two brain regions are known to regulate emotions, organization and balance, functions that mild TBI sufferers typically complain are impaired. Brody said the next step for the researchers will be to try to determine whether damage to these or other areas of the brain are a predictor of mild TBI symptoms.

The study also suggests that servicemembers suffer a unique type of brain damage from blasts, injuries that differ in fundamental ways from the kind suffered by athletes or car crash victims.

But Brody and his colleagues cannot be sure. In addition to blast exposure, all the servicemen at Landstuhl had suffered conventional head trauma, such as from banging against vehicle walls or being thrown to the ground.

Making sense of the scans

By having MRIs in Afghanistan, the researchers hope they will be able to find and scan troops who were in close proximity to explosions but did not experience any other head trauma.

Air Force Dr. (Lt. Col.) Raymond Fang, former director of trauma at Landstuhl and a co-author of the study, said scanning these patients would help to answer whether some of this axonal injury is due to the bomb&rsquo;s overpressure waves.

But the researchers emphasize that the more sensitive scanning alone will not work as a tool to clinically diagnose whether someone has suffered mild traumatic brain injury. Such a test has eluded the military, which relies on servicemembers to report their symptoms, or on cognitive screening exams given by doctors.

But diffusion tensor imaging, in conjunction with other testing, could one day be used to help military doctors diagnose mild traumatic brain injuries more accurately. A scan showing axonal damage would be useful to military doctors, Brody said. Before it becomes a diagnostic tool, though, more and larger studies need to be done and the imaging method needs to be standardized.

&ldquo;It looks very encouraging. But the validation of the approach needs to occur,&rdquo; said Christine L. MacDonald, a research instructor in neurology at Washington University and a co-author of the study. &ldquo;All imaging methods started out like this, small stepping stones until they can be used universally.&rdquo;