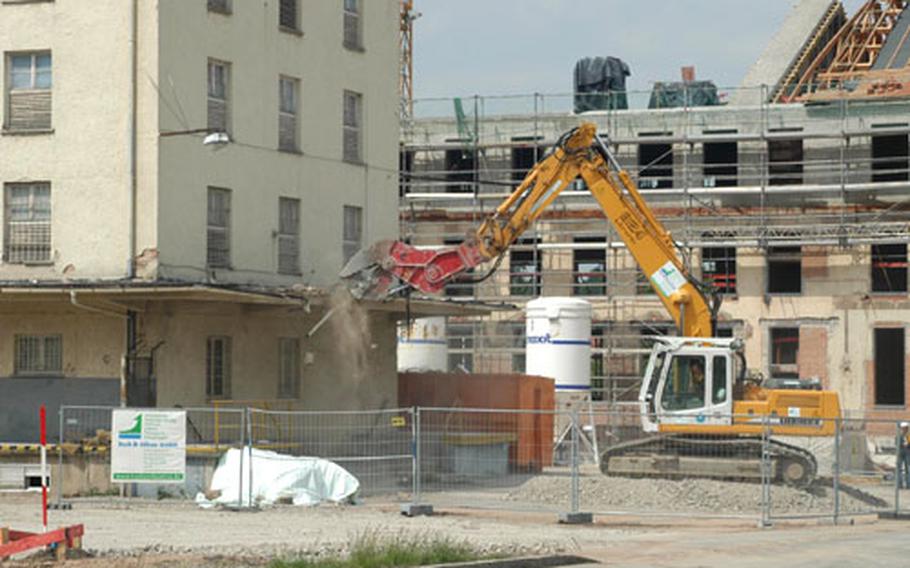 A crane prepares to break away part of an awning on Wednesday from a building that will be demolished to make way for new construction as part of Efficient Basing Grafenwöhr. Among the construction projects scheduled are a new clinic, library and shopping complex. (Rick Emert / S&S)

GRAFENW&#214;HR, Germany &#8212; In a touch of irony, the formal groundbreaking ceremony for a big construction project Wednesday centered around the demolition of a building.

As representatives from Installation Management Agency-Europe, the 100th Area Support Group and the German government conducted the ceremony, a crane from Bock and Sons in Babenhausen chipped away at a building that will be torn down to make way for a project to build facilities for 8,500 military and family members.

The project, called Efficient Basing Grafenw&#246;hr, or EBG, is creating the new home for a brigade combat team &#8212; six battalion-sized units &#8212; on a single installation, according to the 100th Area Support Group.

The program will move two battalions&#8217; worth of soldiers and families each year beginning in fiscal. Total construction is expected to take seven years, according to the 100th ASG.

&#8220;Through our partnership, the U.S. Army will gain operational efficiencies by consolidating units in the Grafenw&#246;hr area,&#8221; Russell Hall, director of Installation Management Agency-Europe, said at the ceremony.

&#8220;This consolidation enhances organizational command and control and provides increased training opportunities and force protection. Additionally, soldiers and families will experience a living environment that is modern and coherently master-planned.&#8221;

Construction has been under way for several months on a one-stop processing center for incoming and outgoing soldiers. Other construction projects will include an elementary and middle school, shopping center and upgrades to the medical and dental clinics.

In all, 26 projects totaling 90.8 million euros &#8212; about $110 million &#8212; will be awarded to local contractors, said Dr. Wilhelm Weidinger, president of the Upper Palatinate during remarks at the ceremony. The Upper Palatinate is an administrative region comprised of the upper half of the German state of Bavaria, which includes Grafenw&#246;hr.

&#8220;Naturally, I am very happy that our construction office here in Grafenw&#246;hr, which is a part of the government of the Upper Palatinate, is obviously advancing the projects in a timely manner and in great cooperation with our American customers,&#8221; Weidinger said through a translator.

Hall said the extensive construction projects would lead to better quality of life for soldiers stationed at Grafenw&#246;hr in the future.

&#8220;With this construction, our work will certainly make a difference in the lives of thousands of U.S. soldiers who come to Bavaria in the future and who will experience &#8230; the best quality of life possible during their assignment in Germany.&#8221;