Ground is broken for new mall-hotel complex at Ramstein 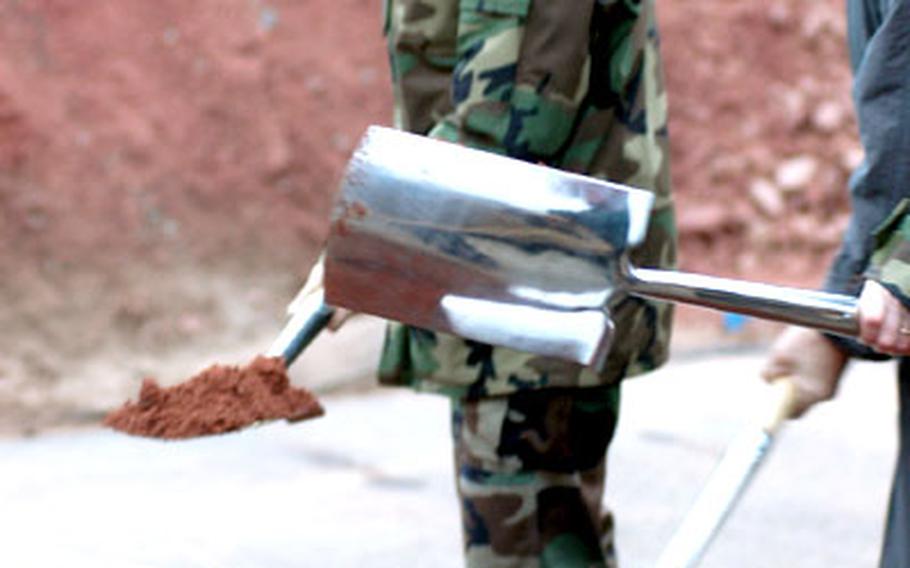 Brig. Gen. Rosanne Bailey, commander of the 435th Air Base Wing at Ramstein Air Base, helps break ground Friday for the Kaiserslautern Military Community Center Friday with members of a joint U.S.-Germany delegation. The 729,000-square-foot, $150 million hotel and shopping center is the largest single construction project in the Department of Defense. (Ben Murray / S&S)

Brig. Gen. Rosanne Bailey, commander of the 435th Air Base Wing at Ramstein Air Base, helps break ground Friday for the Kaiserslautern Military Community Center Friday with members of a joint U.S.-Germany delegation. The 729,000-square-foot, $150 million hotel and shopping center is the largest single construction project in the Department of Defense. (Ben Murray / S&S) 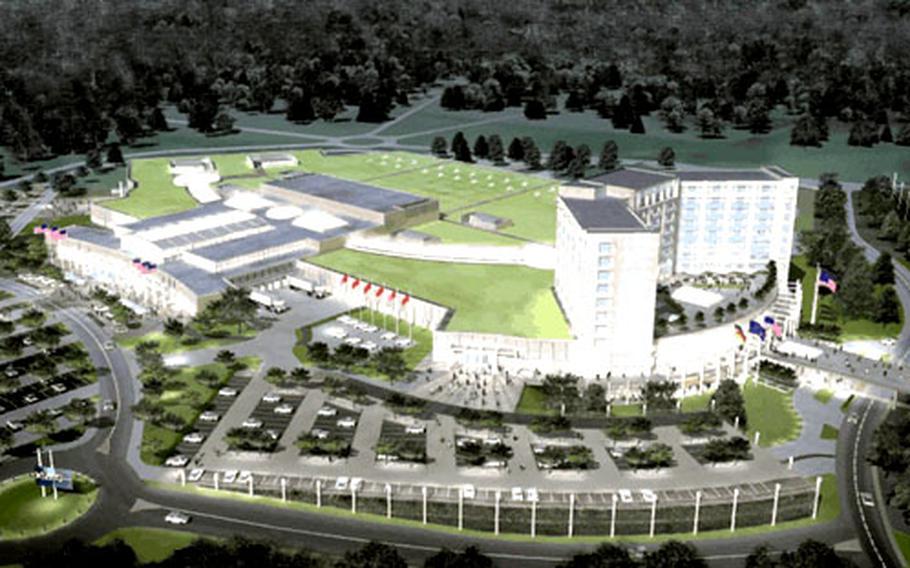 An artist&#39;s rendering of what the 729,000-square-foot Kaiserslautern Military Community Center will look like when it is completed in August 2006. (Courtesy of U.S. Air Force)

RAMSTEIN, Germany &#8212; While some of the buildings rising out of the construction dust at Ramstein Air Base recently may seem expansive, rest assured: You ain&#8217;t seen nothin&#8217; yet.

When finished in 2006, the center will be eight stories at its highest point, contain four movie screens, a bank, several restaurants and retail stores, a travel agency, a food court and an outdoor recreation center, along with other amenities.

&#8220;This will be the biggest AAFES shopping mall in the world,&#8221; said Col. Shelley Richardson, commander of the Army and Air Force Exchange Service&#8217;s European headquarters, at Friday&#8217;s ceremony.

Financed by AAFES, Air Force nonappropriated funds, military construction money and Rhein-Main Transition Program funding, the center is meant to be the jewel in the crown of the expanding Ramstein base. Ramstein will become the European hub for U.S. military air traffic in December 2005, when Rhein-Main Air Base is shut down.

Friday&#8217;s groundbreaking was attended by several German and U.S. military officials, who spoke to a crowd of nearly 100 people at the construction site. German contractors will be doing most of the construction work.

&#8220;Today we mark the beginning of a new era for Ramstein Air Base,&#8221; said Brig. Gen. Rosanne Bailey, commander of Ramstein&#8217;s 435th Air Base Wing. Bailey and other speakers hailed the project as a landmark of cooperation between the U.S. military and its German hosts.

The groundbreaking was purely symbolic, however, as tree clearing and preparatory work at the site has been under way for more than a year, Hahn said.

The lodging portion of the center will be the first part to be completed, in April 2006, with the shopping center to open its doors in August 2006, he said.

When everything is finished, the complex will be ringed by four new traffic circles and 3,000 parking spaces, and the AAFES exchanges at Ramstein and Volgelweh will be shut down, according to Hahn.

While the KMCC is the largest single project in development in the Kaiserslautern military community, construction at the nearby Landstuhl Regional Medical Center also is reaching a high point.

According to Landstuhl&#8217;s chief of facilities management, Michael Arseneau, the hospital is reaching a crescendo in its renovation of the 1950s-era facility with an upcoming $8.5 million project to install air conditioning throughout much of the facility. Crews are expected to start work on that project in February, he said.

The hospital is also in the midst of several other renovation projects, including:

A $2 million improvement of the hospital&#8217;s &#8220;grossly undersized&#8221; eye-care center, which Arseneau said will be nearly doubled in size.Construction of a $500,000 vaccine center, to be funded and staffed by DOD.A general &#8220;face lift&#8221; for the intensive care unit, expansion of the labor and delivery rooms and improvements to the audiology department.Ongoing upgrades to the medical center&#8217;s gas, sewer and electric systems.Landsuhl also is in the design phase for additions to its postpartum wing and a new $1.4 million electricity transformer site, Arseneau said.