Ground is broken for major housing project at Osan 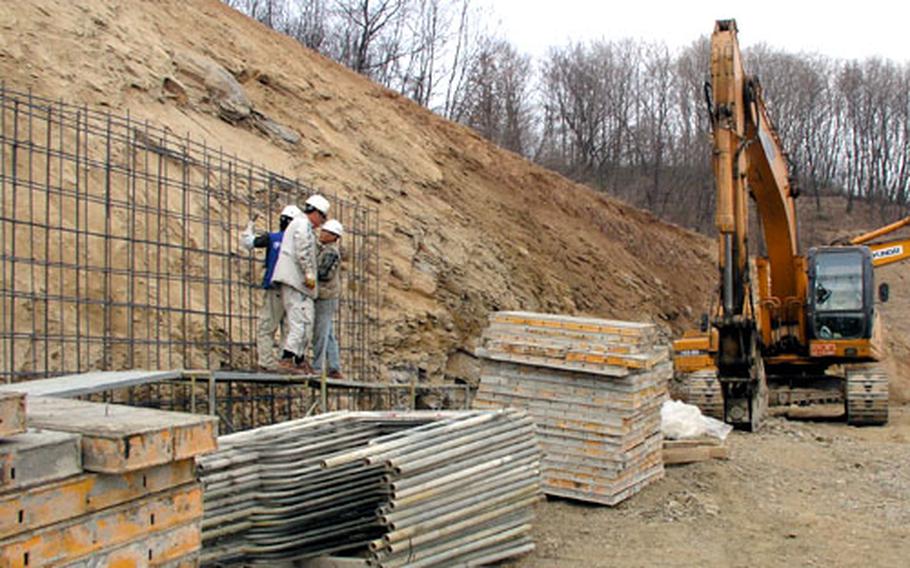 The project is the first construction to go forward under the Land Partnership Plan, signed in March 2002 between the South Korean and U.S. governments, officials said.

Under the plan, the U.S. military will gradually close many of its installations, shift many of its forces south of Seoul, and enlarge some of its key remaining installations. Among those slated to grow are Osan Air Base and Camp Humphreys, both in the Pyongtaek area.

Construction on the new $30 million tower project has been under way since November on the first building, which will have 112 apartments and is set to open in February 2006.

And the Air Force will begin construction on two more such buildings &#8212; one this fall, the other in fall 2005.

The first building is going up on a 7.2-acre site next to Mustang Valley Village, an existing Air Force family housing complex that houses 199 families in three-story townhouse-style apartment buildings, about a five minute drive southeast of the air base perimeter.

Though the site of the new tower currently lies outside the base perimeter, it is on land owned by the Air Force and will eventually be enclosed behind a wall or other perimeter barrier. The other two buildings will be on the current site of the 1000 series officer dorms, not far from the base officers&#8217; club.

When Air Force families eventually move into the nine-story building, awaiting them will be elevators, carpeting, dishwashers and other state-of-the-art features installed to meet Air Force housing standards, officials said.

Military readiness, he said, &#8220;has many aspects. Sorties and fuel are easy to quantify but job satisfaction, efficiency, and family readiness are harder to measure. We&#8217;ve come a long way improving these immeasurable quality-of-life factors across the board at Osan and this will be the most visible example of our efforts.&#8221;