Ground is broken for key road project in Afghanistan 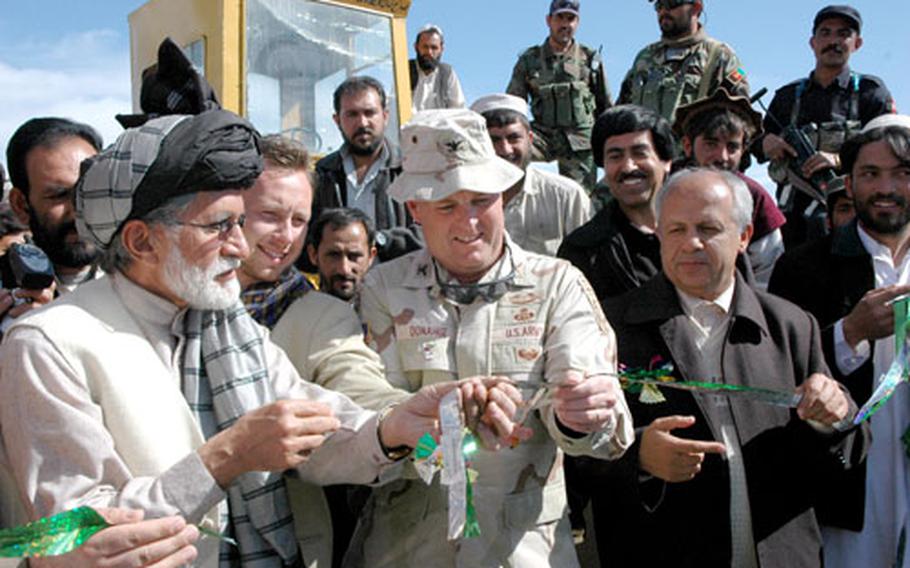 Governors Hakim Taniwal, left, and Merajuddin Patan flank Col. Pat Donahue during a ribbon-cutting ceremony marking the groundbreaking of a road that will connect the provincial capitals of Khowst and Gardez. (Anita Powell / S&S)

KHOWST, Afghanistan &#8212; With a snip of a gaily colored ribbon, local Afghan and U.S. Army officials on Tuesday celebrated the beginning of a project that will help ease the distance between Afghanistan and the rest of the world.

The ceremony outside the city of Khowst in southeastern Afghanistan marked the groundbreaking of a road project that will connect the provincial capitals of Khowst and Gardez, providing a valuable trade route from Afghanistan to the port of Karachi in Pakistan. Work on the nearly 60-mile, $6.7 million road began in October 2005 and is expected to be complete in November. The project has been contracted to the Khowst-based Zurmat Construction Co., an Afghan company. Officials predict the company will hire about 300 local residents to help build the road.

&#8220;This will be, we predict, the major route linking Afghanistan and Pakistan,&#8221; said Col. Pat Donahue, commander of Task Force Devil, which operates in the Khowst area. &#8220;With these roads will come industry, jobs and progress.&#8221;

The new road will also cut more than 225 miles from the current route from Kabul to Karachi, and will decrease the time of the trip from Khowst to Gardez from about five hours to 2&#189; hours, Donahue said.

Local officials, who said they initially proposed the project to American officials, said they felt the road was essential to the further development of the region.

&#8220;Without this road, we will not have good progress in this region,&#8221; said Khowst governor Merajuddin Patan, who in a speech compared American military efforts in Afghanistan to the Marshall Plan, which was responsible for the post-World War II rebuilding of Germany.

Governor Hakim Taniwal, of Gardez, said he and Patan both felt strongly about the need for the road, which led them to approach American officials.

Both men said they did not feel the road project could have been conducted without assistance from donor nations.

&#8220;There is not enough from the income of Afghanistan,&#8221; Taniwal said in English. &#8220;[The road] was our idea. We considered this road a very important road for the stabilization of the area and for the economic development of the area.&#8221;

For Donahue, projects such as the road also represent a definite shift in American warfare.