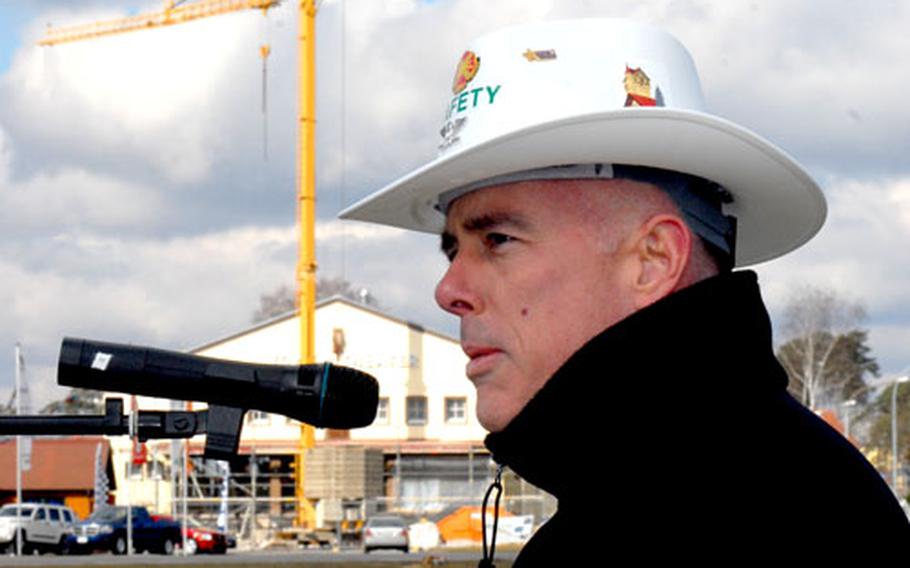 The 136-room, $24 million facility &#8212; to be built next to a Burger King restaurant, a bowling alley and a field that used to be part of an on-post golf course &#8212; will replace the century-old Tower Inn hotel within two years.

The hotel is one of many facilities being built as part of the Efficient Basing Grafenw&#246;hr project. Under project plans, the base will grow from what was a 1,000-soldier garrison a few years ago to a brigade-size facility with 4,500 active-duty soldiers and 7,000 family members, according to garrison spokeswoman Susanne Bartsch.

U.S. Army Corps of Engineers representative Walt Bogdanow told those at the ground-breaking that the new hotel will be a three-story, horse-shoe shaped building with 18 kitchenettes and 46 family units, each with an extra bedroom and living room.

"Like most complex multiphase construction projects, there will no doubt be challenges," he said.

Col. Nils "Chris" Sorenson, U.S. Army Garrison Grafenw&#246;hr commander, said the project would provide state-of-the-art lodging for soldiers, civilians and their families &#8212; "the same quality of life that is afforded the society they are pledged to defend."

As Sorenson spoke at the ground-breaking ceremony, workers could be seen in the background renovating the base movie theater, which has been closed all winter but should be open by early summer.

On the other side of the post, a behavioral health complex is being built beside the clinic.

The complex will house "&#8230;everything we are doing to help soldiers with the new emphasis on Army mental health &#8212; all these issues like depression and PTSD (post-traumatic stress disorder)," Sorenson said.

And nearby the old commissary is being converted to a community support center &#8212; a hangout for soldiers. Renovations on the building should be complete by April, with the center expected to open as soon as furniture can be moved in, he said.

The base is also planning landscaping work to beautify the area around the 172nd Infantry Brigade&#8217;s temporary headquarters. And a road linking the main post with Netzaberg&#8217;s off-post housing area that has been closed over winter will reopen by fall, Sorenson said.