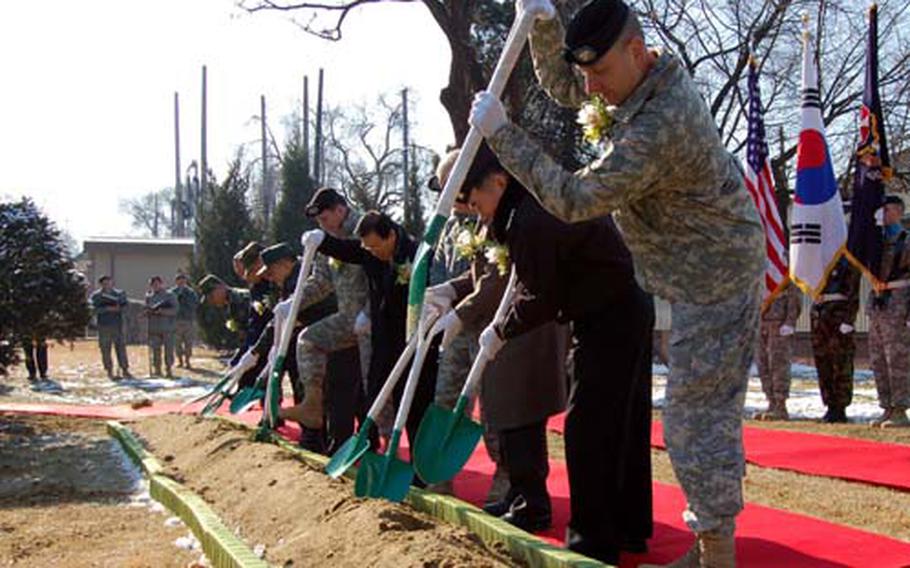 Officials from U.S. Forces Korea and the Republic of Korea/U.S. Friendship Society prepare to turn ceremonial shovels full of dirt Tuesday during the groundbreaking ceremony for a statue of Gen. Walton Walker at Yongsan Garrison. (Jimmy Norris / S&S)

SEOUL &#8212; When Gen. Walton Walker died after a noncombat-related traffic accident during some of the darkest days of the Korean War, his 8th Army soldiers were taking a beating from the enemy.

On Tuesday, the 58th anniversary of Walker&#8217;s death, South Korean and U.S. military officials gathered at Yongsan Garrison on Tuesday to break ground on a statue dedicated to the man, one of the war&#8217;s earliest U.S. generals who was credited for doing much to buy time so United Nations forces could turn the war around.

On the 58th anniversary of Walker&#8217;s death, officials marked the beginning of construction of a statue in his honor by cutting a ribbon and moving a ceremonial shovelful of dirt outside the 8th U.S. Army headquarters building.

The statue, paid for by the Republic of Korea/U.S. Friendship society, is slated for completion in late 2009.

When U.S. Forces Korea leaves Yongsan, the statue will remain on display outside the 8th Army headquarters building, which is slated to become a museum to "showcase the U.S. military&#8217;s contributions to peace and stability on the Korean peninsula," said 8th Army commander Lt. Gen. Joseph Fil.

Walker, the first commanding general of 8th Army, is best known for his defense of the Pusan Perimeter in the early months of the Korean War.

"Had he not boldly and skillfully maneuvered his scant forces around the South Korean chessboard ... friendly forces would have had to abandon Korea and retire to Japan, and the commitment of the free world to save South Korea from communist aggression would have been seriously jeopardized," Fil said during Tuesday&#8217;s groundbreaking ceremony.

Historian Max Hastings wrote in "The Korean War" that in the weeks before the general&#8217;s death, morale flagged in 8th Army, with rumors that Gen. Douglas MacArthur was considering replacing Walker.

Troops in his headquarters spoke openly about "evacuation as the only course," according to Hastings, who described Walker as an "indisputably brave man" who "had given all that he could offer to the cause of the United Nations."