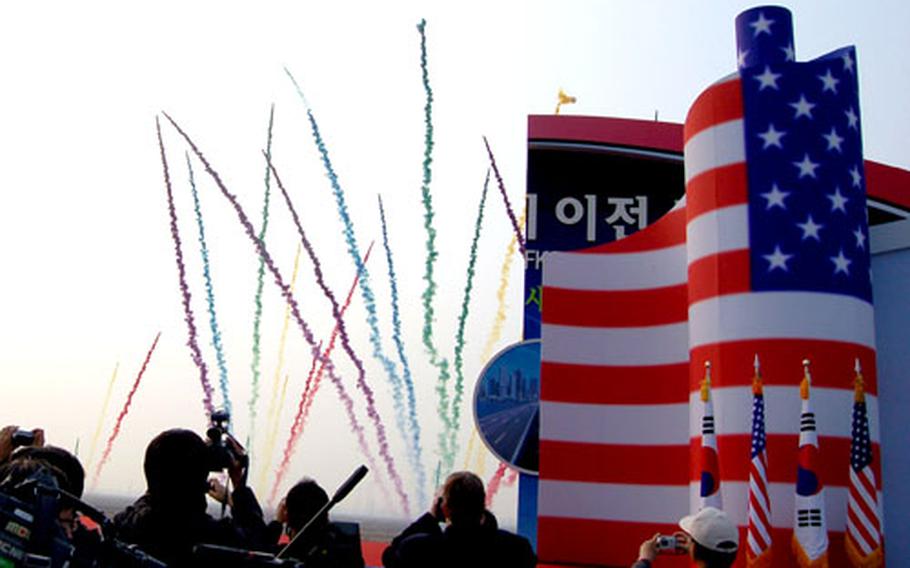 Colored smoke streaks into the sky at a ceremony Tuesday marking the groundbreaking at land that will support the U.S. Forces Korea expansion of Camp Humphreys. (Jimmy Norris / S&S)

Colored smoke streaks into the sky at a ceremony Tuesday marking the groundbreaking at land that will support the U.S. Forces Korea expansion of Camp Humphreys. (Jimmy Norris / S&S) 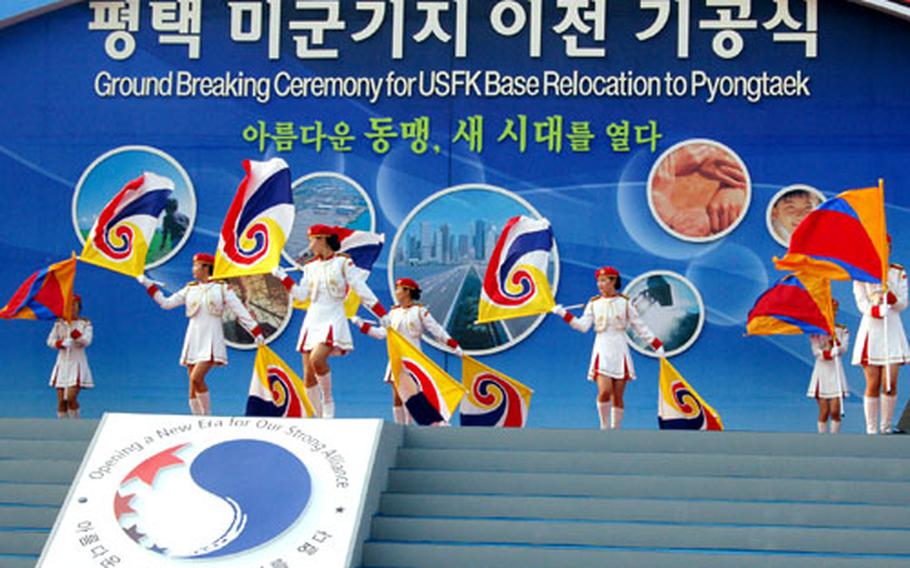 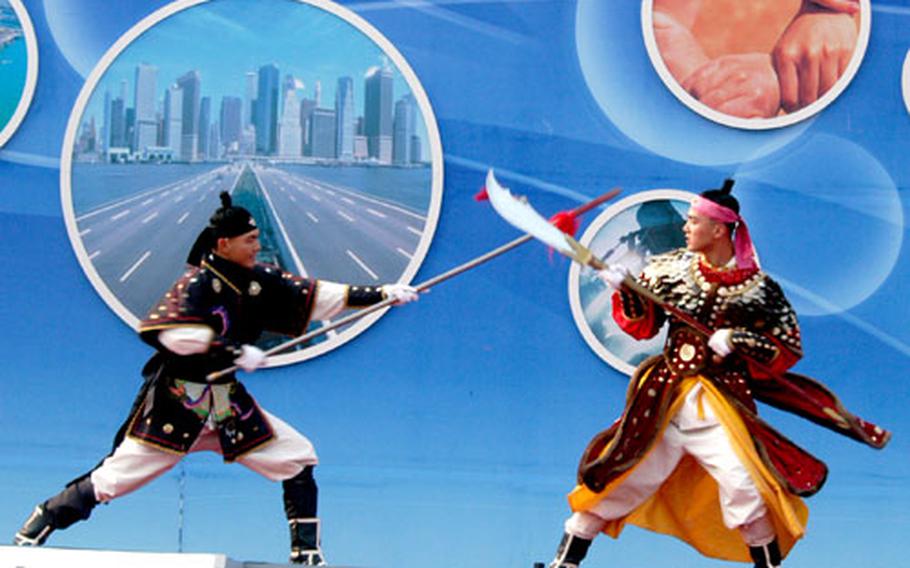 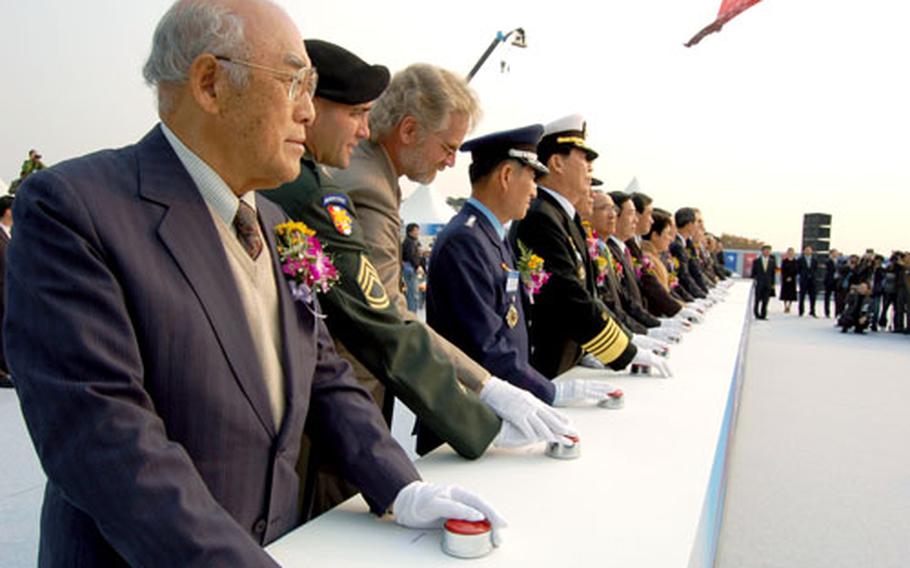 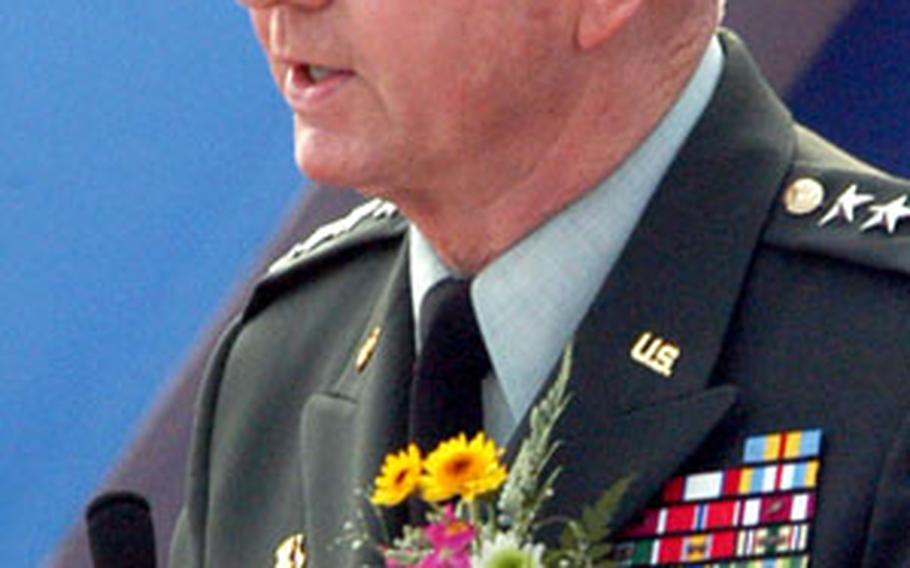 &#8220;This historic moment says to all Koreans and Americans, as well as to our mutual friends and our potential adversaries, that the Republic of Korea desires a long-term military alliance with the United States to maintain U.S. military forces on this peninsula,&#8221; USFK commander Gen B.B. Bell said during the ceremony. &#8220;It also says as a valued and trusted ally, the United States will continue to sustain and nurture this alliance as long as we&#8217;re welcomed and wanted in this land throughout the 21st century and beyond.&#8221;

The event was the latest milestone in USFK&#8217;s ongoing efforts to turn the once sleepy helicopter air base into the future of the U.S. military in South Korea by 2012.

The expansion plan was met with bitter and often violent opposition in recent years, with protest groups holding demonstrations to support the farmers who were displaced in the plan.

Every South Korean dignitary who spoke at Tuesday&#8217;s ceremony mentioned the sacrifice of the land&#8217;s previous owners.

&#8220;I am especially grateful to the citizens of Daechu-ri. They have finally agreed to support this project despite the painful fact that they would have to leave their hometown to which they are deeply attached,&#8221; said Cha Sung-soo, South Korean secretary to the president for civic and social agenda, in a letter he read on behalf of South Korean President Roh Moo-hyun.

Following the speeches by dignitaries, including South Korean Minister of National Defense Kim Jang-soo and U.S. Ambassador to South Korea Alexander Vershbow, the event ended with a blast of hues, sending colored smoke columns and balloons into the air.