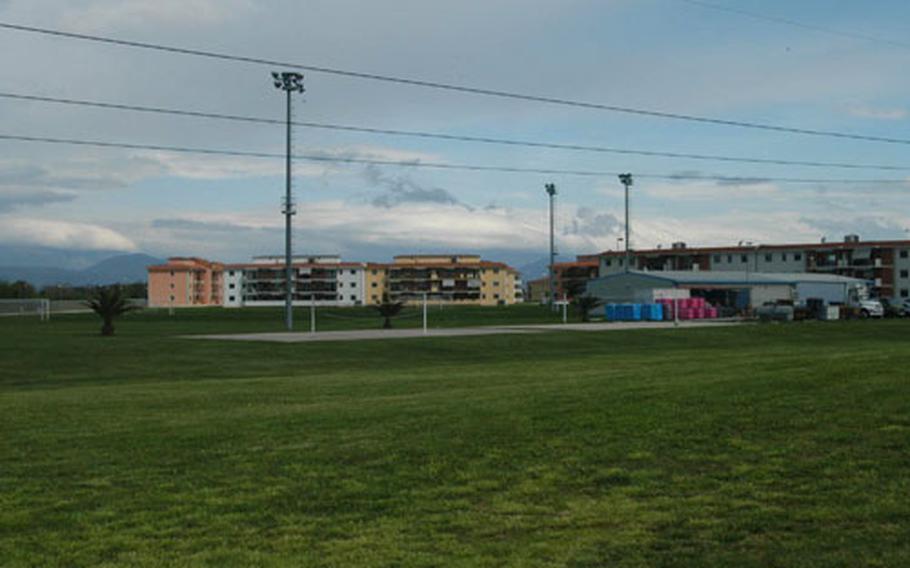 Construction has begun on sports fields at the Gricignano housing area near Naples as the first step in building 119 new housing units. The new fields will require a move of the existing base fence line and even a change in part an existing highway overpass. (Jason Chudy / S&S)

NAPLES, Italy &#8212; Gricignano is growing as base officials plan for an additional 119 housing units at the Naval Support Activity Naples housing area.

The 114 apartments and five senior officer homes will be built behind the base commissary in a grassy field now used mainly for sporting events and base festivals.

Once the new fields are in place, construction will start on the housing units.

The 119 units will be in addition to 876 already in place. Construction should be complete by 2006. The 114 apartments will all be two- or three-bedroom units, similar to those already on the base.

Military members are assigned to quarters when they arrive in Naples. Families that are directly assigned to government quarters then have the option to move onto the Italian economy at their own expense after six months.

The Gricignano support site is part of the 1996 Naples Improvement Initiative, a $700 million quality-of-life improvement project that was originally schedule to be completed by 2001.

Construction has also started on the base&#8217;s exchange and commissary complex. Work there is expected to be complete by summer 2005.

Also nearing completion on the support site is a veterinarian clinic &#8212; expected to be open in about a month &#8212; as well as a large gym and pool complex, which is forecasted to be completed later this year.

The support site in located in the town of Gricignano, about 15 miles north of NSA Naples&#8217;s main Capodichino base.