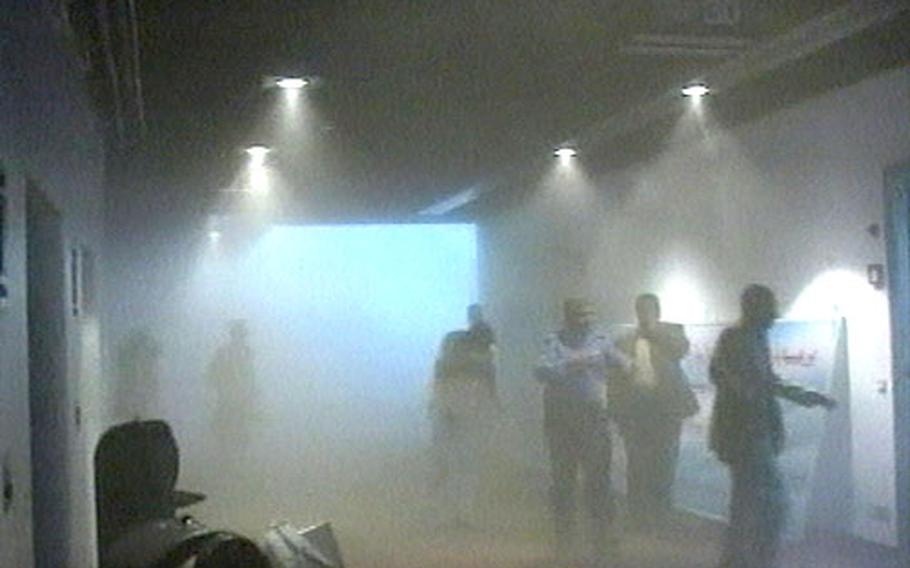 BAGHDAD &#8212; An explosion ripped through the cafeteria of Iraq&#8217;s parliament building Thursday, killing at least eight people, including three lawmakers. More than a dozen others were injured in the latest in a string of recent attacks against the heavily fortified Green Zone, the U.S. military said.

A spokesman for the U.S. Embassy in Baghdad said no Americans were hurt.

The explosion, apparently triggered by a suicide bomber, launched a plume of smoke into the air high above the building and shattered windows throughout Baghdad&#8217;s Convention Center.

Security officials at parliament, who spoke to The Associated Press on condition of anonymity because they were not authorized to release the information, said they believed the bomber was a bodyguard of a Sunni member of parliament who was not among the dead. They would not name the member of parliament.

The officials also said two satchel bombs were found near the cafeteria. A U.S. bomb squad took the explosives away and detonated them without incident.

Iraqi members of parliament had just concluded their business day when the bomb detonated amid a group of 15 or 20 lawmakers, U.S. State Department workers and kitchen staff.

Hours after the bombing, Iraqi officials including Deputy Prime Minister Barham Saleh met with the commander of all U.S. forces in Iraq, Gen. David Petraeus, and decided to put the Interior Ministry in charge of security at parliament, Iraqi government spokesman Ali al-Dabbagh said. The building was previously guarded by a private security company, he said.

Petraeus also issued a statement saying the U.S. military extended condolences to those &#8220;martyred&#8221; in the bombing. It was &#8220;an attack on democracy by individuals who oppose the concept of government that is representative of and responsible to the people,&#8221; he said.

Iraqi officials said the bomber struck the cafeteria while several lawmakers were eating lunch, and at least three of them &#8212; two Sunnis and a Shiite &#8212; were killed.

Another witness, a U.S. State Department employee who asked not to be named because he had not received prior approval to talk to reporters, said he was just sitting down to lunch when it happened.

Legislators said many parliament members already had left the building and the few who remained for lunch were mostly Sunni.

Witnesses said they suspected the attack was committed by a suicide bomber because they had seen dismembered body parts at the scene. While some said they had believed the convention center was safe from such an attack, because of an extensive network of checkpoints in the Green Zone, others said they began worrying when the job of securing the building became the duty of Iraqi security forces.

A security scanner for pedestrians at the entrance to the Green Zone near the parliament building was not working Thursday, Mohammed Abu Bakr, who heads the legislature&#8217;s media department, told The Associated Press. People were searched only by hand and had to pass through metal detectors, he said.

The explosion comes amid a period of stepped-up mortar and rocket attacks against what is officially called the International Zone &#8212; a complex of government buildings and military bases that includes the sprawling U.S. Embassy. On March 27, an American soldier and a contractor with the embassy were killed in a rocket attack on the Green Zone. A second soldier and four others were wounded in the attack.

Less than two weeks ago, the U.S. military reported that it had discovered two unexploded suicide vests inside the zone.

While the convention center has been struck before by mortar and rocket fire over the years following the fall of Saddam, this is the first time that a bomb was detonated inside the building, which still features an enormous tile mural of Iraqi soldiers battling a fire-breathing dragon marked by an American flag.

The day&#8217;s business was fairly mundane and included a vote on an international agreement on olive oil, as well as the creation of a ministry of youth and sports.

Witnesses said they did not believe the bombing targeted any particular piece of parliamentary business, or any specific member of parliament.

Dhafer Alani, a Sunni member of parliament, said that one of those who died was Mohammed Awad, a former Iraqi army officer, a Sunni and a member of the parliament&#8217;s Council of Dialogue. &#8220;It was by chance that he was killed,&#8221; Alani said.

Legislators and office workers began flooding from the building moments after the explosion as emergency crews sped to the scene. At one point, as U.S. attack helicopters buzzed overhead, an injured Iraqi man was loaded into the back of an ambulance.

Before the truck could pull away, another man in a suit and carrying a briefcase attempted to open the door of the ambulance, and was confronted by security personnel.

Others walked around dazed, their clothes bloodied and pants torn where emergency crews had scissored the material, checking them for injuries.

Journalists at the scene were not allowed to take photographs.

The attack triggered searches by the military throughout the area and some 500 Iraqi Green Zone workers and officials were herded into a waiting area for several hours before they were finally released.