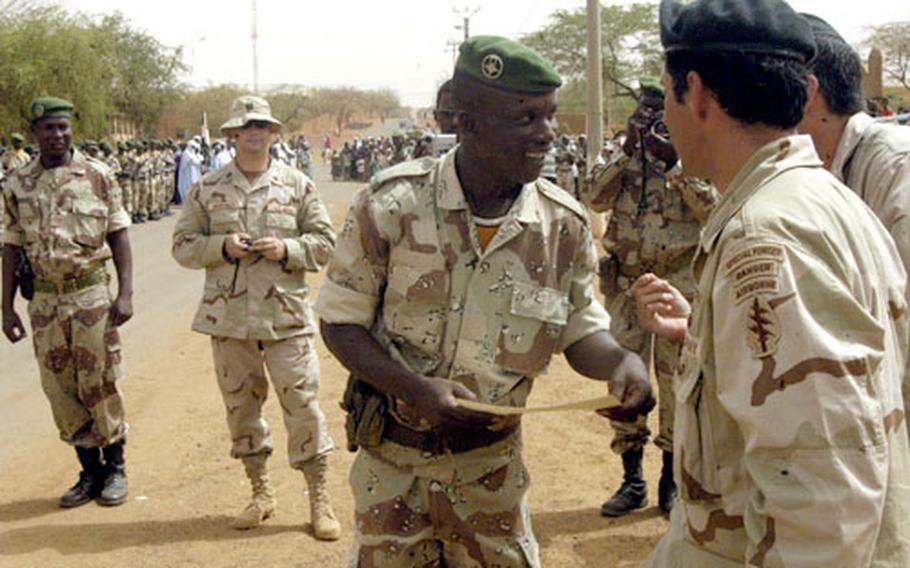 A Nigerien soldier accepts a certificate during a ceremony in downtown Tahoua, Niger, on June 22 that signaled his soldiers&#39; completion of two weeks of training by U.S. Green Berets. (Charlie Coon / S&S)

A Nigerien soldier accepts a certificate during a ceremony in downtown Tahoua, Niger, on June 22 that signaled his soldiers&#39; completion of two weeks of training by U.S. Green Berets. (Charlie Coon / S&S) 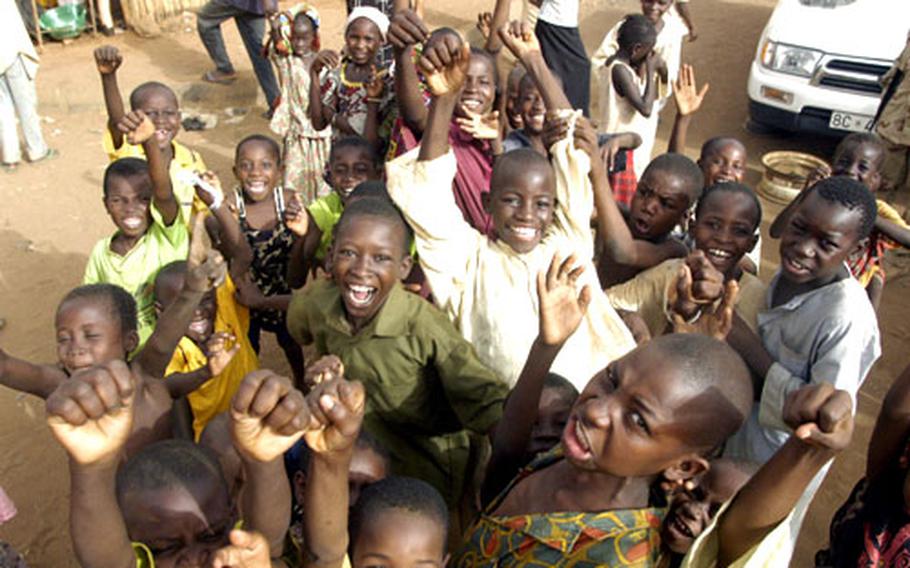 After staring curiously for a few minutes, children in Tahoua, Niger, often came running (and begging for money) when U.S. soldiers walked down their street. For the most part, the people in Tahoua welcomed the Americans, who were training Nigerien soldiers during June as part of the Flintlock 05 exercise. (Charlie Coon / S&S)

TAHOUA, Niger &#8212; On Wednesday, far from where high-ranking people were making global plans, lower-ranking men shook hands on a job they hoped was well done.

&#8220;Will I miss these guys? Yeah,&#8221; said John, a staff sergeant, who with his fellow Green Berets spent June teaching U.S. tactics to soldiers from Niger.

Since northern Africa has been tagged as a potential hotbed of terrorism, it&#8217;s important to the U.S. military that northern Africans have good opinions of Americans, as well as peace, democracy and their own nation&#8217;s stability.

The Green Berets of Team Niger hope the lessons they offered their new comrades would help the Nigeriens hunt down and kill terrorists and others who threaten Niger&#8217;s new democracy.

For the lessons to stick, they agreed, the Nigeriens needed to take them to heart and use them in training and future operations against enemies, which could happen soon.

If you nurture peace and stability, you fight terrorism, according to the U.S. European Command, or EUCOM, which coordinated the Flintlock &#8217;05 exercise that ended this week.

The Green Berets in Tahoua, who asked that their full names not be used, nurtured two companies of eager-to-learn Nigeriens on tactics such as foot patrol, reconnaissance and ambush.

A strong, professional army, according to EUCOM, helps make a government strong. That is why EUCOM arranged this month for armies from five northern African countries to receive U.S. training.

The Nigeriens have their own terrain, mostly desert, and their own resources, mostly four-wheel-drive pickup trucks and older rifles. When it comes to military tactics, Dennis said, one size does not fit all.

The lessons were basic: to patrol smartly, perform reconnaissance with cunning, and attack with deadly efficiency. Also, to develop junior leaders, enabling higher officers to lead the war.

Niger, a nation about three times the size of California, is mostly peaceful and moderate. Like the other bordering nations that received U.S. military training during Flintlock &#8212; Algeria, Chad, Mali and Mauritania &#8212; Niger has vast deserts, where a lack of law and order has left a void exploited by extremists.

Earlier this month, insurgents are believed to have traveled from Algeria through Niger to Mauritania and killed 15 Mauritanian soldiers at a remote base, making off with vehicles and military equipment.

Many of the nations are hampered by poverty and disease and, in recent years, have had their governments overthrown by coups.

&#8220;The exercise accomplished what we set out to do, which was to get cooperation from all the nations,&#8221; said U.S. Maj. Gen. Thomas Csrnko of Operation Flintlock, which officially ended Thursday.

&#8220;This is hopefully the beginning of a long relationship between our forces and their commands,&#8221; he said.

Soldiers from the two Nigerien companies, many of whom had been previously trained by U.S. Marines, confidently replied that they&#8217;d taken the lessons to heart.

Special Forces soldier John would not venture as to whether Flintlock &#8217;05 will make Niger and its neighbors an enduring ally for America.