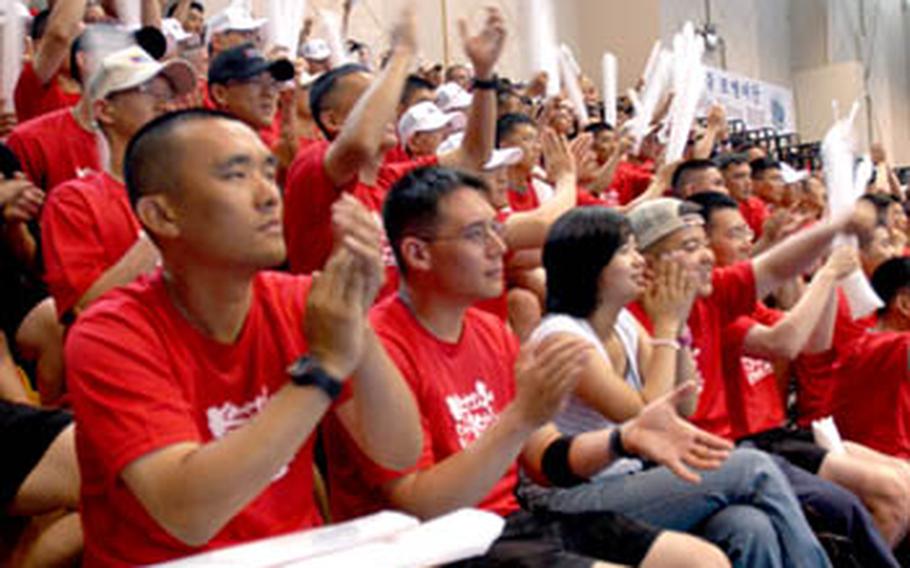 Korean Augmentees to the U.S. Army — KATUSAs — and U.S. soldiers cheer during an awards ceremony marking the end of KATUSA Friendship Week. The week promotes friendship between U.S. soldiers and KATUSAs assigned to the 2nd Infantry Division. (Seth Robson / S&S)

Korean Augmentees to the U.S. Army — KATUSAs — and U.S. soldiers cheer during an awards ceremony marking the end of KATUSA Friendship Week. The week promotes friendship between U.S. soldiers and KATUSAs assigned to the 2nd Infantry Division. (Seth Robson / S&S) 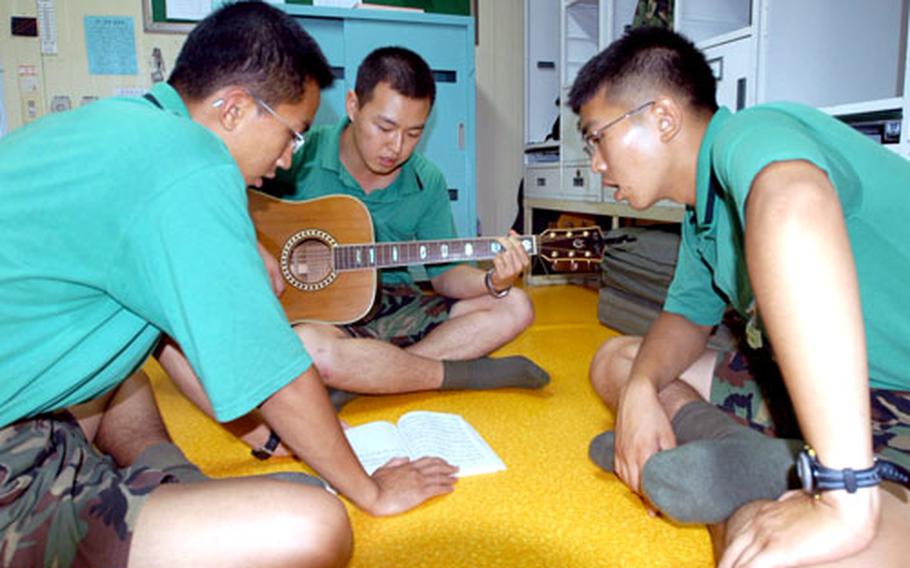 Republic of Korea Army soldiers relax in their barracks. In their free time, South Korean soldiers exercise, pursue hobbies or study on-post. However, soldiers are not allowed to have cell phones, MP3 or DVD players or cameras for security reasons. (Seth Robson / S&S)

Just to gain a chance of becoming a KATUSA, young South Korean men must pass a physical and score 625 points or better out of 700 in a written and spoken English-language test.

Competition is so hot that even after they pass the tests, candidates must allow a lottery to decide whether they will snag available KATUSA slots with U.S. Army units.

Why go to all that trouble to become a KATUSA?

It is arguably the most rewarding way for South Korean men to complete their two years of compulsory military service, required under South Korean law.

All male South Korean citizens must begin a two-year term of military service between ages 18 and 29 or face criminal sanctions. They can complete this service as a KATUSA or by joining the Republic of Korea (ROK) army, navy, air force or marines.

Both routes satisfy the military service obligation, but conditions under which the men serve their two years are vastly different.

Following is a look at the military lifestyles of ROK army soldiers and KATUSAs.

KATUSAs soak up U.S. culture while preparing for civilian lifeAt Camp Red Cloud, a few miles from the ROK army&#8217;s Rising Tide base, KATUSA Sgt. Won Woo Hee has his own American-style barracks room complete with two televisions, a refrigerator, queen-size bed and desk. Won, 28, who serves with 2nd ID&#8217;s Special Troops Battalion, also could have Internet access in his room but chooses not to.

KATUSAs stationed at Camp Red Cloud said they have access to all of the recreational facilities available to U.S. soldiers, including the bowling alley, swimming pool, gymnasium, sports fields and golf course. (Read more)

Soldier: Training is one of most grueling parts of the ROK armyThe ROK army&#8217;s 65th Infantry Division home is about halfway between the U.S. Army&#8217;s camps Red Cloud and Casey &#8212; and less than 20 miles from the demilitarized zone that separates North and South Korea.

The base is nicknamed &#8220;Rising Tide,&#8221; a reference to the 8,000 reservists who would flow into the base to supplement the 2,000 regular army soldiers in the division in time of war.

At first glance, the facility, nestled among rolling hills and farmland, appears similar to U.S. bases in the area. But inside the chow hall, the difference is obvious. (Read more)