Dr. (Maj.) Angela Wall examines the ear of a young patient during a humanitarian medical mission in Fask, Morocco, on April 22. The little girl was diagnosed with an infection and given antibiotics. (Charlie Coon / S&S)

Dr. (Maj.) Angela Wall examines the ear of a young patient during a humanitarian medical mission in Fask, Morocco, on April 22. The little girl was diagnosed with an infection and given antibiotics. (Charlie Coon / S&S) Latifa, 18, second from right, and others wait for dental appointments April 22 during a humanitarian medical mission in Fask, Morocco. She would later have her upper-right first molar removed. (Charlie Coon / S&S) 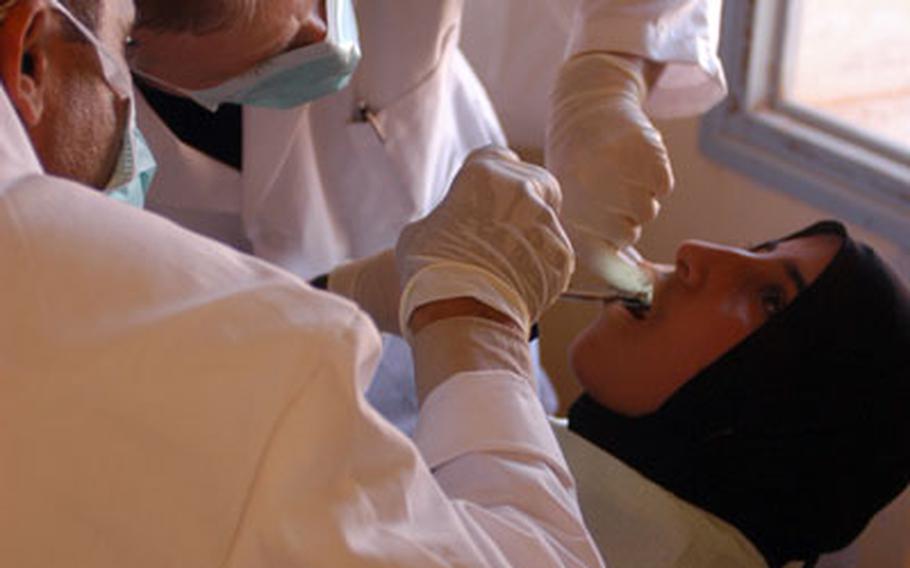 Dr. (Maj.) William Dunlap, center, a dentist with the 944th Medical Squadron, gives an injection to Latifa, an 18-year-old woman, on April 22 during a humanitarian medical mission in Fask, Morocco. (Charlie Coon / S&S) 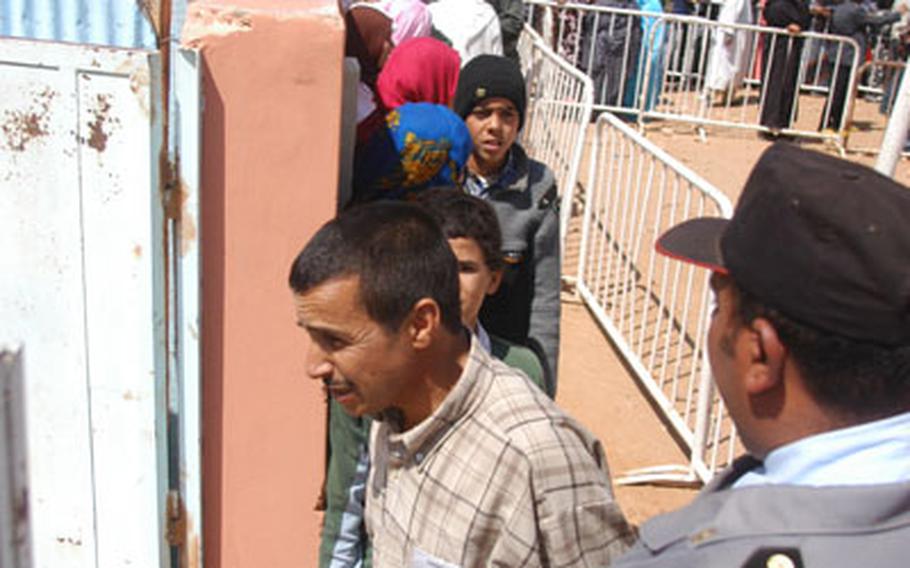 Patients enter a clinic in Fask, Morocco, during a humanitarian medical mission led by the 944th Medical Squadron. The mission was one of 10 performed near the towns of Guelmin and Tan Tan, Morocco, as part of African Lion 07, a joint, annual exercise of the U.S. and Moroccan militaries. (Charlie Coon / S&S)

FASK, Morocco &#8212; Last Sunday, Latifa and hundreds of others walked to the small cluster of buildings where the Americans and Moroccans were giving out free health care.

They had read about the presence of the medics on posters in their village. Latifa, 18, had a very sore mouth and was hoping someone could help.

Troops from the 944th Medical Squadron &#8212; mostly Air Force reservists &#8212; had arrived by bus. They were visiting their fourth village in four days, performing exams and giving out medicine as part of African Lion 07, a two-week U.S.-Moroccan military exercise. The annual event, involving approximately 300 U.S. military personnel, combined live-fire and other training with medical outreach, and was scheduled to conclude Monday.

Latifa wore a blue outfit and black headscarf and had a firm handshake and a beautiful but pained smile. She did not know there was a deep cavity in her upper-right molar, the tooth farthest back in her mouth.

Like the others who had waited in line, she stopped first at the registration table, and then moved to the next table where the triage folks made the diagnosis and pointed Latifa toward the dentists&#8217; room.

Others were pointed toward small rooms in the makeshift hospital where pediatrics, internal medicine, gynecology and other specialties were being performed by the airmen and their Moroccan counterparts. Some translators were out and about.

One Moroccan officer, taking a chance because the Moroccans had been ordered not to talk to the reporter, pondered why the large turnout.

Latifa was called into the crowded dentists&#8217; room, where two other patients were being worked on. They all sat on plain, wooden chairs. Next to Latifa sat an old man leaning back in his chair, mouth wide open. He had one tooth left and it was coming out.

Latifa leaned back in her chair and three men crowded around her open mouth. A dentist stuck a needle into her upper-right jaw, squeezed the syringe, and then stuck in another one.

The dentist then went in after the bad tooth. As he pried and twisted, Latifa clutched the fabric of her clothes, and her toes curled in her sandals. One of the dental assistants shined a flashlight into her mouth; the other held a wad of gauze, ready for blood.

After five painful, wincing minutes, the tooth was extracted. Blood poured from Latifa&#8217;s mouth. One of the assistants turned and dropped the blood-covered tooth, which had three roots, into a plastic cup. The girl covered her face in pain and shook. She nearly passed out and was fanned with napkins.

She wobbled as she was led away to a recovery room.

Dr. (Maj.) William Dunlap, who pulled the tooth, said Latifa would have suffered for years. But now, hopefully, the hole in the back of her mouth would heal over in about three months, as though there was never a tooth there.

In about 15 minutes, Latifa was led to the pharmacy room and, still shaking, clutched the arm of an airman. She was given painkillers and vitamins.

Then Latifa and three family members walked away from the still-bustling clinic, off into the sun and back to from wherever they had come.