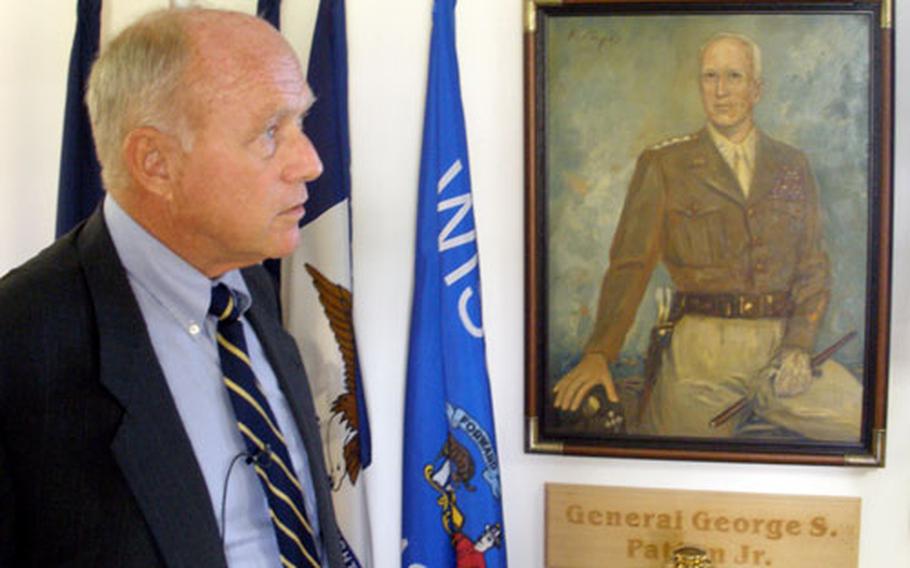 When his grandson, George Patton Waters, stepped behind the desk during a visit to the Camp Normandy facility on Tuesday, it appeared that the great man was back from the dead.

Waters, 67, is the spitting image of his famous granddad. It became obvious when he handed NCO Academy commandant Command Sgt. Maj. Hu Rhodes a reproduction of an oil painting of Patton that he keeps at his North Carolina home.

But while Waters has the "Old Blood and Guts" aquiline gaze, white hair and balding pate, he doesn&#8217;t carry pearl-handled revolvers or spit four-letter words.

The business-suit-wearing civilian is quietly spoken and humble about his roots.

"I&#8217;m not General Patton. I served in the Navy. I went to Vietnam and after five years I decided I didn&#8217;t want to stay in. I have a real estate operation in Louisiana these days," Waters said.

He came to Grafenw&#246;hr to thank troops for their good work, he said.

Waters wasn&#8217;t sure if Gen. Patton ever came to the training area but recalled that his grandfather captured 83,000 square miles of enemy territory in Europe during World War II.

Waters also stopped by the Grafenw&#246;hr Library in the afternoon to check out a pair of Gen. Patton&#8217;s boots, a field jacket and other personal items that he loaned the library.

Waters was 5 when his grandfather died Dec. 21, 1945, from injuries suffered in a vehicle crash earlier that month in Germany.

What would Gen. Patton be doing if he were in today&#8217;s military?

"If he were alive today we wouldn&#8217;t be where we are. In 1945, he was a liberator. He was not interested in the political world. We have to have some politicians in there now. General Patton was not a politician. It was his way or don&#8217;t bother to try," he said.