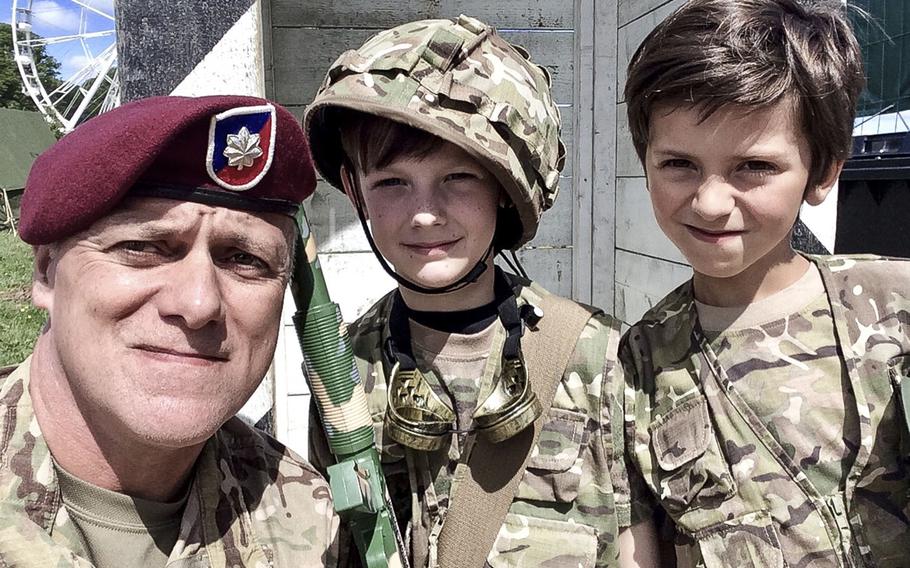 Lt. Col. John Hall of the 173rd Airborne Brigade takes a moment to fulfill a request for a photo with two French boys dressed as soldiers in Sainte-Mere-Eglise, France. Hall was with the American paratroopers who were participating in the D-Day commemoration. These boys were playing as guards at a campground near the American airborne forces. (Courtesy of John Hall)

Lt. Col. John Hall of the 173rd Airborne Brigade takes a moment to fulfill a request for a photo with two French boys dressed as soldiers in Sainte-Mere-Eglise, France. Hall was with the American paratroopers who were participating in the D-Day commemoration. These boys were playing as guards at a campground near the American airborne forces. (Courtesy of John Hall) A local citizen is saved from drowning in the frigid waters of Pria Park, a swimming hole in the Dolomite Mountains of northern Italy by Lt. Col. John Hall, a paratrooper in the 173rd Airborne Brigade. The man was challenged to jump from the cliff that surrounds the deep swimming area formed by the melting snows from the surrounding mountains. (Josselyn Fuentes/U.S. Army) 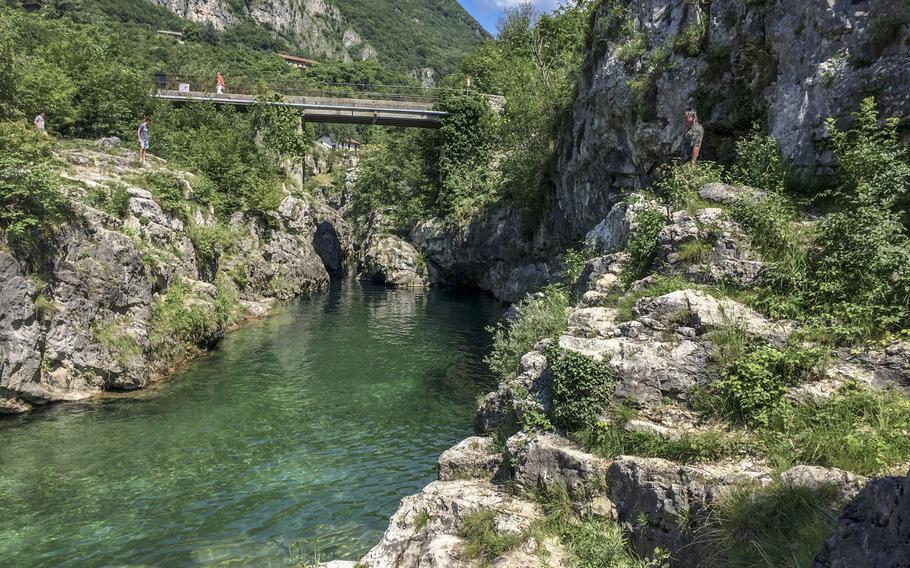 Visitors are looking down from the cliffs that surround a popular swimming area for locals in northern Italy. The frigid waters that flow through these bluffs are created by melting snow from the surrounding Dolomite Mountains. (Josselyn Fuentes/U.S. Army) Lt. Col. John Hall of the 173rd Airborne Brigade with his grandsons Tim, left, and Jeremy after they met him following a jump near Juliet drop zone in Aviano, Italy, Monday. Hall saved a local citizen from drowning in the frigid waters of Pria Park, a local swimming hole in the Dolomite Mountains of northern Italy. (Courtesy of John Hall)

VICENZA, Italy — A grandfather in his fifties – possibly the oldest soldier in the 173rd Airborne Brigade – jumped off a cliff into a frigid Italian river this month to save a drowning man’s life.

Lt. Col. John Hall, 53, a Flint, Mich., history teacher and Army National Guardsman who’s spent the last year on active duty with the brigade, reacted during a June 17 family outing to a swimming hole on the Astica River near the village of Contra Pria in the Dolomites.

As his two grandsons played in the shallows, he stood on a rock ledge above the water to get a better view of some scuba divers. He wasn’t planning to swim because he was just coming off knee surgery and the rocks were slippery.

He watched three young Italian men in bathing trunks take turns jumping off the ledge across from him into the icy water. He saw that one of them began to struggle, gasping, splashing and calling out for help. He saw that the friends who jumped in again to help couldn’t. In his panic, the drowning man grabbed them, endangering them as well. Then the drowning man went under for a good 10 seconds.

“I thought something has to happen right now. I thought I’m the only guy in a position to do something,” Hall said in an interview Friday. “So I just jumped.”

He spread his arms wide as he descended in his shorts, Hawaiian shirt, shoes and socks, he said. Then he started swimming.

“I came up from behind him and I just wrapped my arm around his throat and immediately turned into a sidestroke. I popped him on my hip,” Hall said. “He completely quit fighting. I think he’d given up at that point. The look in his eyes — he was in shock or terrified.”

Hall swam the man to the steep riverbank and along with the other two Italians helped push him up the rocks to safety.

Hall clambered out and checked on the young man he’d fished out.

“He was shaking and pacing,” Hall said. “Then he walked over to me and gave me a great big hug. You could feel the warmth coming through the cold. It was a very good moment for us and those (Italian) guys.”

Hall, who spent nearly a decade as an enlisted Army medic and became a public affairs officer, never took a lifesaving class, he said. He learned to swim during boyhood summers spent at a city pool in Mt. Vernon, Ill., encouraged by his grandmother, who’d never learned to swim and so was terrified of the water.

He said that his soldiers’ ethos of duty and sacrifice played a role in his decision to jump, as well as his paratrooper training.

“We’re asked to drop into situations where we don’t have all the support — so we have to be very agile,” Hall said. “You have to go into it with a great deal of confidence, and that’s what I did. By the grace of God it turned out well for everybody.”

Experts say attempting to rescue a struggling drowning person is extremely risky with a potential for the rescuer to instead become another drowning victim.

“It happens more often than we want to talk about,” said Tom Gill, public information officer with the U.S. Lifesaving Association. “It’s altruistic, it’s wonderful but it’s so dangerous.”

Panicked people in the water use whatever is at hand to try to “go up” out of the water to survive, Gill said, including people trying to help them; they grab and climb on them forcing them underwater.

Experts instead recommend tossing a floating device — even a cooler works, they said.

“That is so perfect old school lifesaving,” he said. “You always try to get behind them. Put them in a secure hold.”

Gill said Hall’s expert approach coupled with the victim’s likely exhaustion at that point was the key to the happy ending.

Later, Hall’s wife asked him why he had to be the one to do the rescue.

“I said because no one else did anything,” Hall said.

“I am still in shock about it,” Hall’s wife, Laura, said on Friday. “I just keep thinking, that guy would likely be dead if (Hall) had not jumped to help him.”

After the rescue, Hall was ready to head home.

“I said I think I’m going to call it a day,” he said. He thought that would be the end of it.

But another 173rd Brigade paratrooper, Lt. Col. James Keirsey, also happened to be there, picnicking and swimming with his family. Keirsey told Hall that he was duty-bound to make a report to the brigade.

Hall, who’ll return to his teaching job in Flint in September, is a reluctant hero. He said he just helped out a neighbor.

“It always feels good to help someone out, doesn’t it?” Hall said.