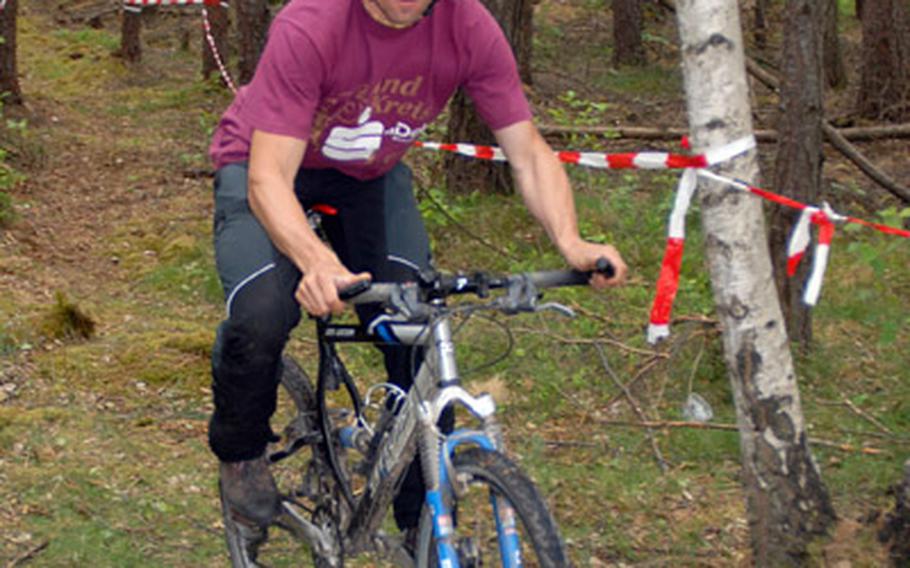 The trail, which snakes through a dense forest dotted with small lakes and streams inside Grafenw&#246;hr&#8217;s TA5 range, is open for mountain bikers to use in the lead-up to Saturday&#8217;s race.

The track is similar to one built for last year&#8217;s race but there are several challenging new sections, said Jansma, who leads mountain bike rides on off-post trails near Vilseck and Grafenw&#246;hr every Monday evening over summer.

The hardest section on the new track is a newly built, winding, technical hill climb that has seen little use to date, meaning riders must grind their way through a layer of moss that makes it virtually impossible to get to the top without stopping.

The race used to be held off post, starting and finishing at the Grafenw&#246;hr Shutzenhaus and making good use of the hundreds of acres of pine forest surrounding the training area, he said.

One lap of the on-post course is 5.78 kilometers. On race day, men will do four laps and women will do two laps, Jansma said.

Outdoor Recreation plans to approach Range Control with a view to making the course available to mountain bikers year round, he added.

One of the first people to check out the course, local German rider Bernd Hiltel, rated it &#8220;technical but not too fast.&#8221;

Hiltel said there are numerous off-post mountain bike races in the Oberpfalz &#8212; the area surrounding Grafenw&#246;hr and Vilseck &#8212; that American riders also could participate in.

The O-TV Cup, sponsored by a local German television station, includes 11 races in the area over summer, he said.

&#8220;The Oberpfalz is a nice place to ride mountain bikes because there are a lot of single trails and it is not too steep,&#8221; he said.

The IMCOM championship started with an April race at Aviano, Italy, and will include races at Hohenfels, Ramstein, Ansbach, Darmstadt, Dexheim and Garmisch, all in Germany, over summer.