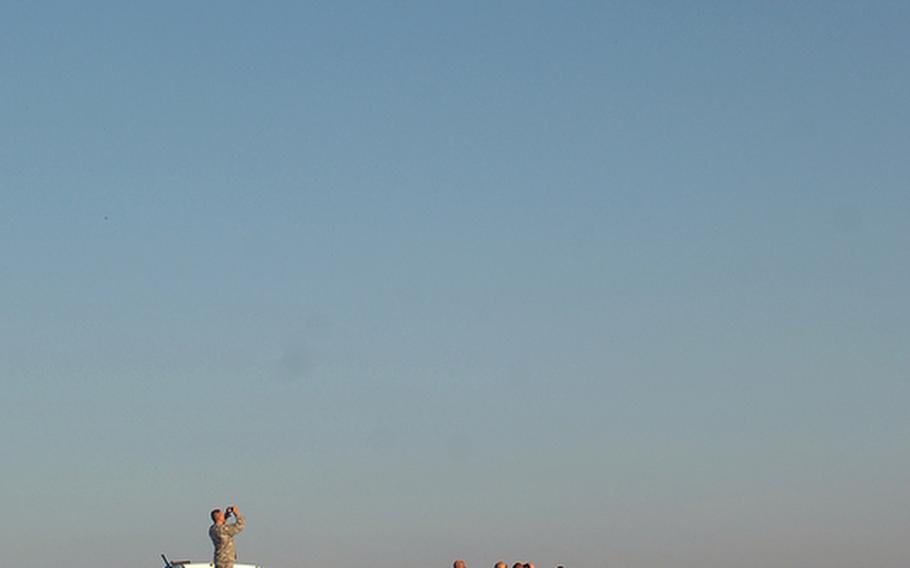 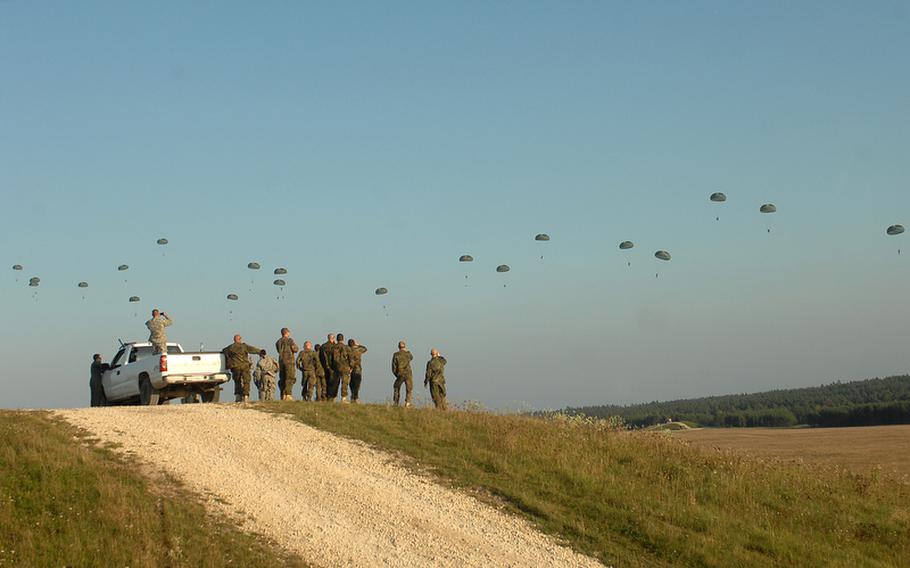 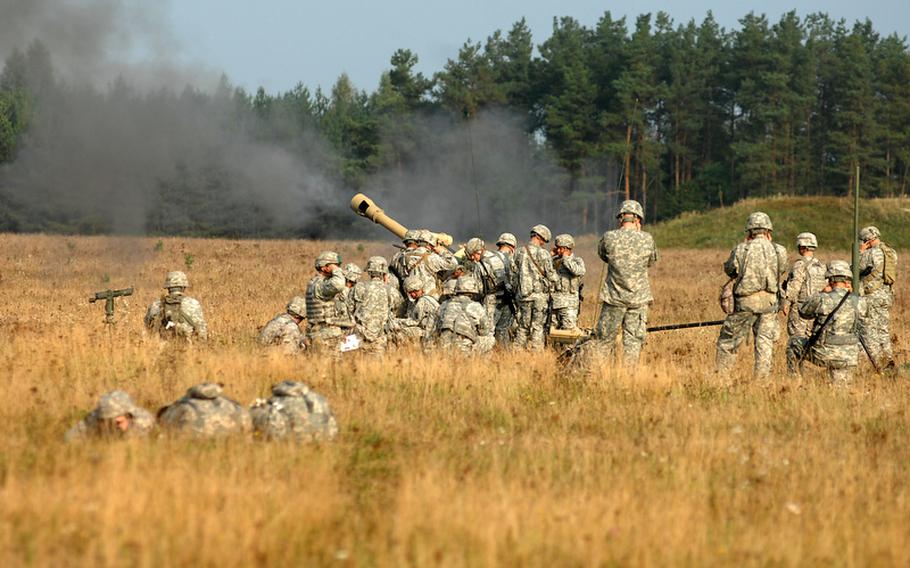 Soldiers with the 173rd Airborne Brigade Combat Team fire a 105mm Howitzer in the Grafenwoehr Training Area on Sept. 28, part of preparations for an exercise in Hohenfels. (Steven Beardsley/Stars and Stripes) 1st Lt. Todd Berrios, a regimental engineer with the 1st Battalion, 4th Infantry Regiment, looks over his selection of mock improvised explosive devices (IEDs) outside headquarters in Hohenfels, Germany, in September. Mock IEDs will be just one part of a massive full spectrum exercise set to begin Wednesday at the Joint Multinational Readiness Center in Hohenfels. (Steven Beardsley/Stars and Stripes) 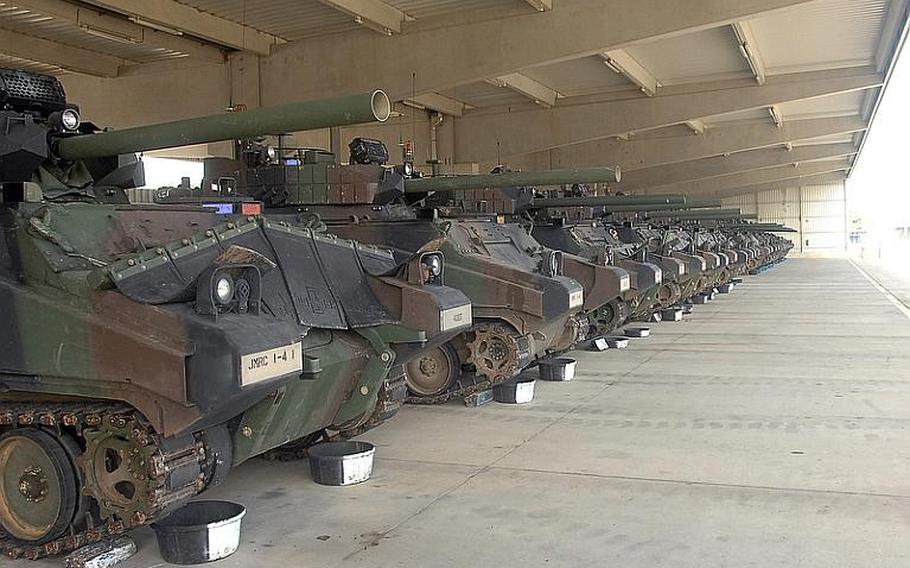 Mock tanks -- armored personnel carriers with a Bradley turret and a fiberglass "barrel" -- line the motor pool shed near the headquarters for the 1st Battalion, 4th Infantry Regiment in Hohenfels. The machines will be used in a massive training exercise set to begin Wednesday. (Steven Beardsley/Stars and Stripes)

GRAFENW&Ouml;HR, Germany &mdash; The morning fog had barely lifted on a training field here when a C-130 approached from the west, opened its cargo door and scattered paratroopers with the 173rd Airborne Brigade Combat Team.

They were practicing for a massive training rotation, one that bears little resemblance to the nation&rsquo;s current wars and represents a step away from the narrow counter-insurgency focus of recent years.

Known as a full spectrum training environment, the complex, monthlong exercise at the Joint Multinational Readiness Center in Hohenfels reshapes a brigade into an expeditionary force and pits it against a conventional force armed with tanks, helicopters and unmanned drones. It&rsquo;s the first European exercise of its scope in a decade, organizers say.

Set to begin Wednesday with a massive jump by the 173rd into the JMRC training area, the exercise comes as the Army imagines life after counter-insurgency fights in Iraq and Afghanistan, and as the Department of Defense reevaluates national armies, including that of China.

&ldquo;The focus has been on COIN (counter-insurgency), but we recognize we have to be prepared to deal with those threats across a full spectrum,&rdquo; said Maj. William Griffin, a spokesman for JMRC.

Under the training scenario, the 173rd will jump into a &ldquo;host&rdquo; country as part of a U.N.- and NATO-backed show of force against an aggressor on the border. The countries are modeled on the Caucasus; they present problems including a mix of ethnic loyalties, a weapons smuggling operation and endangered civilians.

More than 7,500 participants from 17 countries will take part in the exercise. A Slovenian battalion will join the 173rd; a Slovakian battalion will team up with the 1st Battalion, 4th Infantry Regiment to play the opposition force.

The potential &ldquo;battlefield&rdquo; stretches from Hohenfels to Grafenw&ouml;hr and Amberg, organizers say. Potential enemies range from conventional forces to insurgents and organized crime.

The maneuver tactics are new not only to soldiers, but to commanders and junior officers accustomed to the counter-insurgency practices of recent years, Smith and others say.

&ldquo;They&rsquo;re really going to have to attack problems,&rdquo; Smith said. &ldquo;I hate to say &lsquo;for the first time,&rsquo; but it will probably be the first time a lot of them have seen problems at this scale come into play.&rdquo;

That scale is set in part by the Army&rsquo;s full spectrum operations doctrine, updated extensively in 2008. The first update since the June 2001 edition, it was released two years after the Army published its counter-insurgency manual. Much like that doctrine, the update emphasized the importance of stability operations.

Such tasks will play an important role in the training, which begins Wednesday. Soldiers work alongside &ldquo;host-nation&rdquo; security forces, as well as enactors representing U.S. agencies such as USAID and the State Department, organizers say. Public affairs officers will attempt to appease media and civilians as part of the scneario, going so far as to simulate posting Facebook updates on the progress of the operation.

For the opposition force, the exercise represents a chance to expand beyond its typical role as Taliban-style insurgency, Lt. Col. Mitchell Watkins, commander of the 1-4, said. The 1-4 will do double duty as both insurgency and conventional army at the training scenario.

If 173rd commander Col. Andrew Rohling &ldquo;wants to protect the people, we&rsquo;ll make him pay,&rdquo; Watkins said. &ldquo;If we think he&rsquo;s terrain-oriented, then we could make him change his mind.&rdquo;

Watkins&rsquo; soldiers have rehearsed maneuver tactics with 50-plus &ldquo;tanks,&rdquo; he said &mdash; armored personnel carriers modified with a turret and Fiberglas barrel to resemble a T-72 or T-80. They&rsquo;ll have access to some helicopters, he acknowledged, but he was coy on his use of drones, something organizers say are part of the enemy&rsquo;s arsenal.

For Watkins, the goal of training the 173rd means bringing his battalion&rsquo;s best.