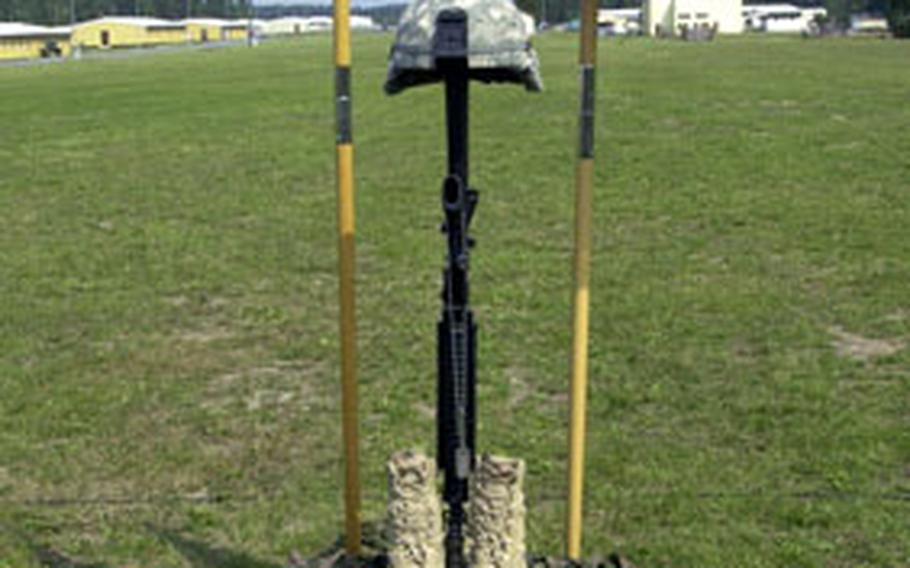 GRAFENW&#214;HR, Germany &#8212; A 9th Engineer Battalion soldier who died during training here was remembered at a memorial Friday as an avid computer gamer and practical joker.

Spc. Joshua E. Mullinix, 22, who joined Company A, 9th Engineer Battalion in December, died at Grafenw&#246;hr&#8217;s Range 126 at about 4 p.m. on Tuesday. An investigation into the death is ongoing, 1st AD officials said in a press release issued Thursday.

Company A commander Capt. Geoffrey McKenzie, 30, of Marianna, Fla., recalled Mullinix as a solid performer and hard worker in the motor pool.

Staff Sgt. Jonathon Badinger, 30, of Piedmont, Okla., said Mullinix, like many of the young soldiers who served with the unit, was an avid video gamer.

&#8220;He was extremely generous,&#8221; Badinger, also with Company A, said. &#8220;Whenever the opportunity arose for a donation for Army Emergency Relief or anything that would help other soldiers out he was always there.&#8221;

They also liked to joke with each other, Williams added. &#8220;The last time we were at Grafenw&#246;hr we were on motor pool gate guard, and this Humvee came up and I was getting ready to go check it out and he said he&#8217;d get it.

Mullinix was born in Gettysburg, Pa., and enlisted in July 2003, a program for the memorial ceremony said.

After basic training at Fort Leonard Wood, Mo., he was assigned to Company C, 91st Engineer Battalion at Fort Hood, Texas. He served in Baghdad for a year during Operation Iraqi Freedom II, the program said.

After returning from Iraq, Mullinix was assigned to Company A, based in Schweinfurt, Germany, where he served as a combat engineer.

Mullinix is survived by his father and stepmother, Larry and Dorthea Mullinix; his mother, Victoria Schrader; and three sisters, Sara, Shawna and Leah.