Grafenwöhr soldier gets down, dirty with quad racing 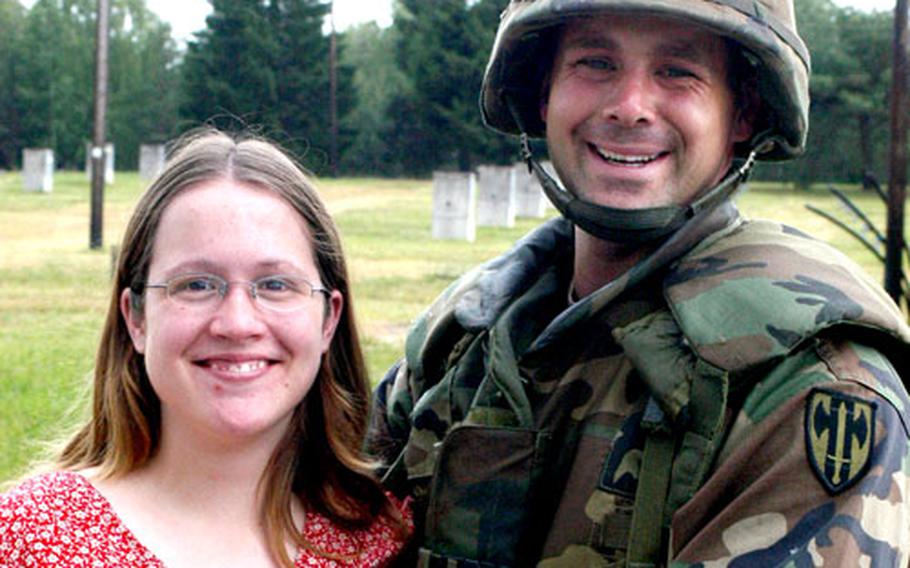 Spc. Andy Green and his wife, Jenny, are expecting the arrival of their daughter, Kaylee Sue, just a couple of weeks after Green’s next quad race in the Northern Bavaria Motocross Championship series. (Ben Murray / S&S)

GRAFENW&#214;HR, Germany &#8212; While many folks around the Grafenw&#246;hr training area were engaging in traditional regional summer activities &#8212; swimming, biking, slapping at the bugs &#8212; Spc. Andy Green was up to something different.

Rolling through the dirt at high speed, the 32-year-old mechanic from the 615th Military Police Company was being chased down by his own 400-pound all-terrain racing cycle as it careened down the track behind him, wrecking itself in the process.

Green had just crashed the four-wheeler in spectacular fashion as he tried to negotiate the crowded motocross racecourse in Hochstadt, Germany, where he was competing for points in the seven-race Northern Bavaria Motocross Championship series.

Green is a regular soldier with an irregular habit: quad racing, the motocross-like adrenaline sport featuring speeds of up to 70 mph, hairpin turns and frequent wrecks.

Sitting astride snarling little four-wheeled demons, riders have to tear around a course studded with bumps, pits and jumps while trying not to collide with one another in the blitz for the finish.

Green, who picked up ATV riding when he was 12, said he wanted to do something to stay active when he arrived in Germany in 2003, so he sought out some local quad racers and found himself in a motocross gold mine, he said.

Northern Bavaria, apparently, is one of the country&#8217;s few hotbeds for the sport, with a number of racetracks within a short distance of Grafenw&#246;hr, Green said.

Tapping into the local racing community, the Missouri native quickly became somewhat of a maverick among the other riders: Green is the only American on the circuit, and competes on a relic of a four-wheeler, a 1988 Suzuki Quad Racer.

Currently, Green is in 10th place in the Northern Bavaria series standings, but hopes to break into the top five by the end of the season, he said.

Now pregnant with the couple&#8217;s first child, a daughter to be named Kaylee Sue, Jenny has been absorbed into her husband&#8217;s racing world, she said, and they both enjoy the social aspects of the sport. She even tried to drive the Suzuki once, the week before the couple&#8217;s wedding.

Now with a child on the way, the potential for danger on the powerful machines worries her, and she&#8217;s made it clear that Andy is not allowed to try to win at all costs.

Green barely avoided that fate in his last crash, but said there&#8217;s little that could keep him away from racing. So far, his worst injury sustained while racing is a broken collarbone.