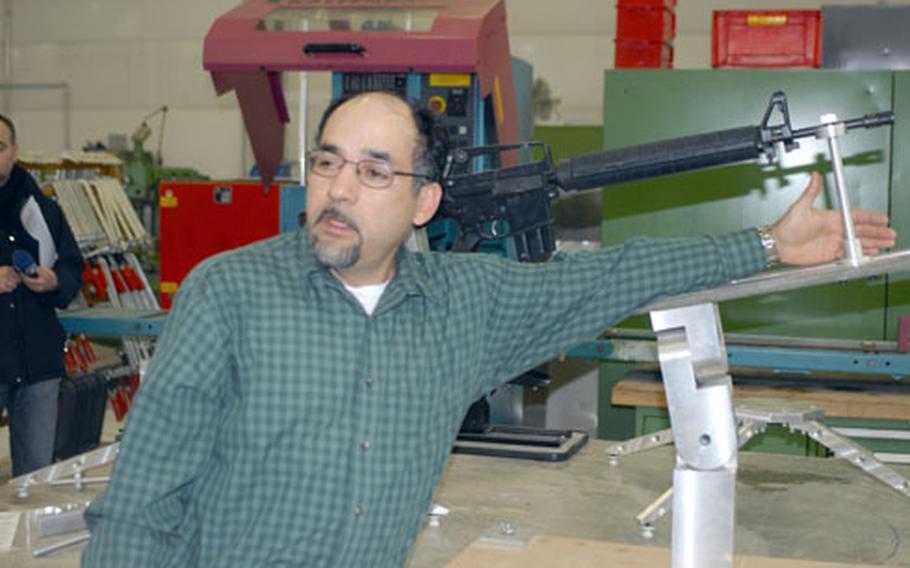 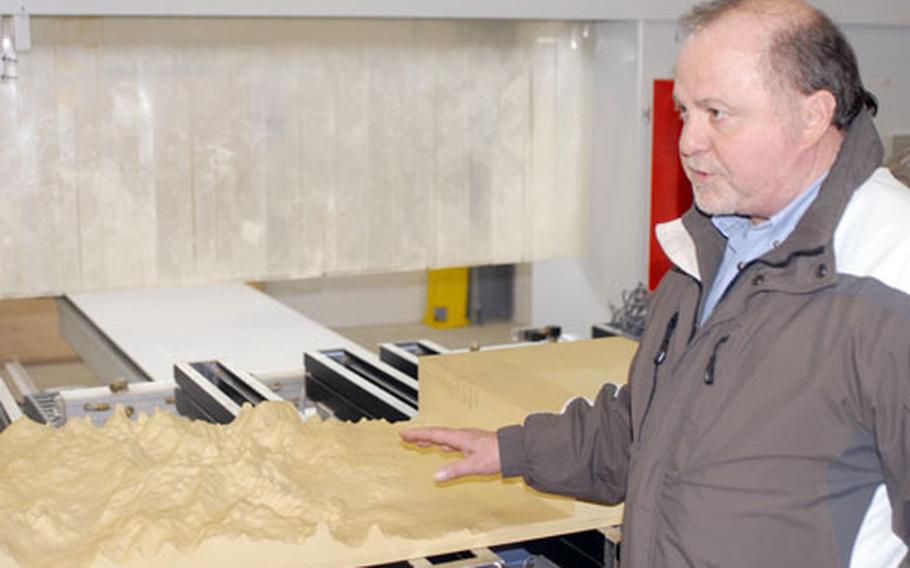 GRAFENW&#214;HR, Germany &#8212; Army units that need stuffed animals, fake grenades, full-size models of the Stryker armored personnel carrier or hand-painted three-dimensional terrain maps can get them made cheaply at a workshop that recently opened at Grafenw&#246;hr Training Area.

The production center &#8212; formerly known as the General Support Center &#8212; was based at R&#246;delheim, near Frankfurt, but began its move to Grafenw&#246;hr under the Army&#8217;s base realignment program late last year, said Robert Arbolay, a general supply specialist who gave visitors a tour of the center&#8217;s metal shop.

Arbolay showed off metal gun mounts made at the shop that will be used to hold weapons steady so lasers attached to them can be calibrated for use with the Engagement Skills Trainer, a virtual reality combat simulator at Vilseck.

The production center, staffed by 20 local craftsmen and women, is a collection of several workshops that specialize in woodworking, metalwork, plastic fabrication, printing and 3-D modeling.

TAPC chief John Krollpfeiffer, the only U.S. employee, said everything produced by the center is custom-made.

Units can order for free training aids with material costs of less than $500, but must pay for more expensive items, he said.

If the production center can&#8217;t make something the Army needs, its staff can put units in touch with European companies able to produce the required training aid, Krollpfeiffer said as he stood in a building full of lathes, printers, wood and metal working equipment, miniature tank models and fake life-size weapons such as a shotgun, M-16 and anti-aircraft gun.

The most unusual items produced by the TAPC are the stuffed animals (goats, dogs and sheep). Units started ordering them 18 months ago to train soldiers to spot potential bombs, Krollpfeiffer said, proudly displaying a synthetic leather, foam-filled goat.

The most complex items made at the center are hand-painted terrain maps &#8212; intricate models of training areas that include trees, hills, buildings and roads. The largest made so far measured 16 feet by 10 feet and took a month to build, he said.

The production center recently built a full-size metal-and-wood Stryker armored personnel carrier for the newly opened nearby Joint Multinational Simulation Center. A full-size mock-up of a helicopter is being built for an Italy-based unit, Krollpfeiffer said.

"Everything we produce is custom-made. It doesn&#8217;t matter how big or small the object," he said. "In the end, the soldiers using our tools don&#8217;t know where it comes from, or who made it. They simply focus on whether or not it works and is realistic."