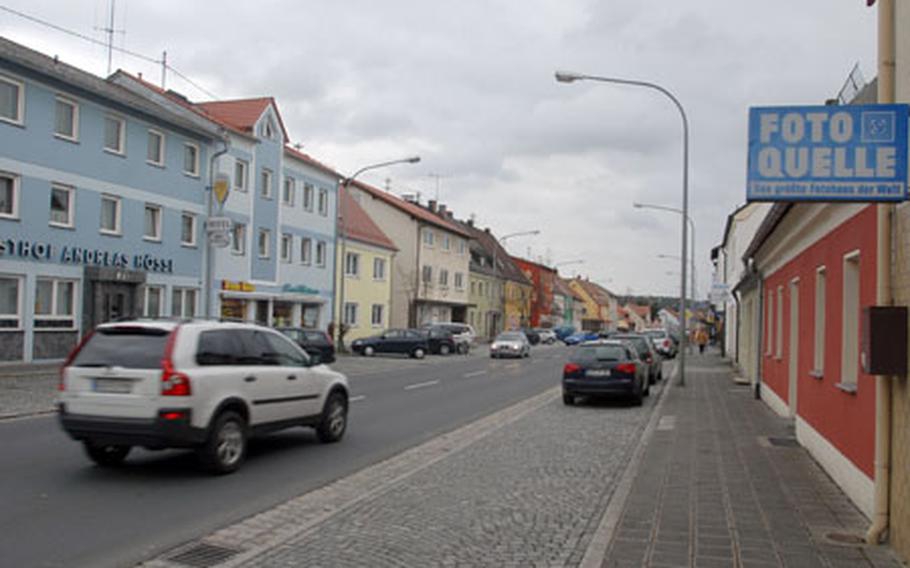 Local opinion is divided over plans for a bypass intended to divert American traffic around downtown Grafenwohr, Germany. At left is a restaurant run by Andreas Hossl, who thinks Americans won&#39;t generate as much traffic as people fear. (Seth Robson / S&S)

GRAFENW&#214;HR, Germany &#8212; Local opinion is divided over plans for a bypass aimed at curbing city traffic generated by thousands of new soldiers and families expected to arrive over the next few years.

The plans were outlined to Grafenw&#246;hr locals at an off-post meeting Wednesday night.

Grafenw&#246;hr&#8217;s mayor, Helmuth Wachter, said the majority of city councilors favored some kind of bypass to cope with increased traffic from Americans living in Netzaberg, a massive off-post housing community that will welcome the first of 800 American families this summer.

Even more Americans will soon arrive at other off-post housing communities in the area.

The U.S. base is expected to grow from a 1,000-soldier garrison with 2,000 military family members to a brigade-sized facility with 4,500 active-duty soldiers and 7,000 family members over the next few years, Susanne Bartsch, spokesman for Efficient Basing Grafenw&#246;hr (EBG) and U.S. Army Garrison Grafenw&#246;hr, has said.

Several options are being considered:

n Two new roads that would take traffic from Netzaberg or Eschenbach on a northern route around Grafenw&#246;hr to link up with the B299 to Pressath;

n An extension of one of those routes that would continue around the town to link up with the B299 south of Grafenw&#246;hr;

n A road south of the town linking the B299 at Gate 6 with the B470, which runs between Pressath and Weiden.

The plans, expected to range in cost from 3 to 10 million euros, will be split between the city, state and federal governments, Wachter said.

Some business people want American traffic to keep going through town, he said.

Andreas Hossl, who runs a restaurant on Ambergerstrasse, said he supports the bypass that would link Gate 6 to the B470 because it would take heavy truck traffic away from the central city.

But the friendly chef, who regularly serves Americans in his restaurant, is against other plans that might divert Americans from town.

Hossl said he does not believe there will be as much traffic from Americans as city officials might think.

&#8220;There are cultural differences between Germans and Americans. Germans eat out on Sunday but the 830 houses at Netzaberg will need 830 barbecue grills because Americans like to stay home and grill food on Sundays,&#8221; he said.

Locals want the Americans to come into town to use the restaurants and shops and public facilities such as the swimming pool, he said.

Bartsch said the garrison has not offered any opinion on the proposals. But she said Netzaberg will have its own gate and road leading to the main post that are due to open around August.

Officials have compared the distance from Netzaberg to various on-post facilities using both the on-post and off-post roads and estimate that driving off-post adds several miles to the journey, she said.