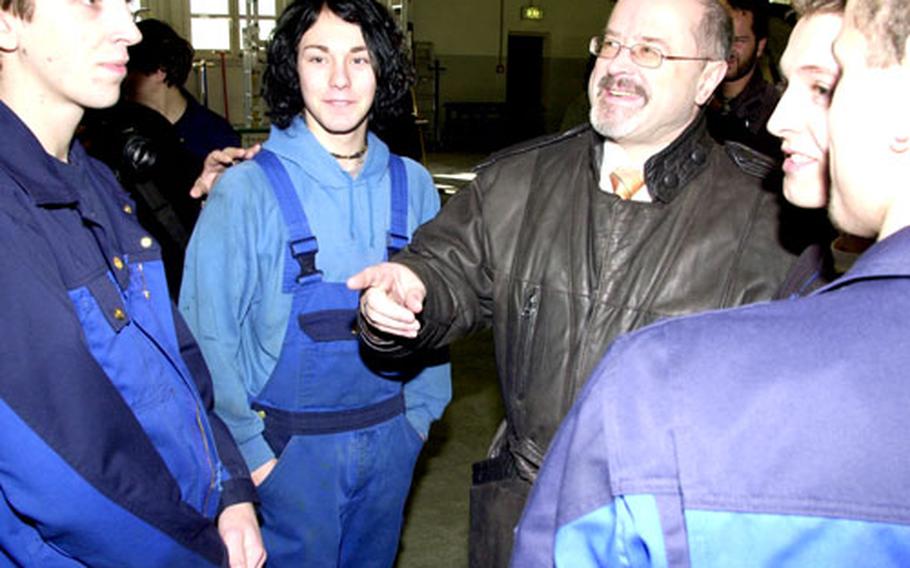 GRAFENW&#214;HR, Germany &#8212; The Installation Management Agency-Europe wants to double the number of German apprentices employed at the garrison as the base grows to accommodate thousands of troops and civilians over the next few years.

&#8220;As we reshape the force we will look for every opportunity to expand. I don&#8217;t have exact numbers or the ability to foresee the future, but I would like to double it (the number of German apprentices employed at Grafenw&#246;hr),&#8221; IMA-Europe director Russell Hall told apprentices, U.S. military and Bavarian state government officials at Grafenw&#246;hr on Monday.

Transformation of U.S. forces in Europe will see the base grow from a 1,000-soldier garrison with 2,000 military family members to a brigade-size facility with 4,500 active-duty soldiers and 7,000 family members over the next few years.

As of December 2005, there were 2,660 German civilians, including 25 apprentices, employed by the Grafenw&#246;hr Garrison, which includes the nearby base at Vilseck. Hall said the German workforce, which has an average age of 55, would expand but that the size of the expansion had yet to be determined.

&#8220;We have an aging workforce, which could present a challenge, but through the apprenticeship program we are counteracting this concern,&#8221; said Brig. Gen. David G. Perkins, the Grafenw&#246;hr-based Joint Multinational Training Command commander.

Apprentices work in various white-collar jobs at Grafenw&#246;hr and as mechanics at Base Support Operations, a facility that maintains 450 pieces of heavy equipment and thousands of smaller machines. The chance of more apprenticeships was welcomed by Bavarian State Secretary J&#252;rgen Heike, who was at Grafenw&#246;hr to hand over Bavarian and European Union funding agreements to pay 500,000-600,000 euros to the garrison in 2006 to subsidize the apprenticeships.

Last year, only eight out of every 100 applicants received apprenticeships in the Northern Upper Palatinate region surrounding Grafenw&#246;hr. The region has an 11 percent unemployment rate compared to just 6 percent unemployment in the local Grafenw&#246;hr area, which shows the positive impact of the U.S. Army facilities, said Heike, who is also Bavarian minister of labor, social affairs and women.

One of the apprentices, Tobius Erl, 16, works at Grafenw&#246;hr&#8217;s Safety Office and is learning about range safety and construction from JMTC safety engineer Joseph Neubauer, 58. Neubauer, who is a lieutenant colonel in the German army reserve, said Erl would be able to work as a clerk at any safety office in the Army once he had finished his apprenticeship.

Erl, who attended the Commerce School in the nearby town of Eschenbach, said he heard about the apprenticeship from his aunt, who works on post, and that many of his friends already had jobs at Grafenw&#246;hr.

Another apprentice, Michael Ritter, 17, works at Base Support Operations helping maintain bulldozers, graders, ditch diggers and other heavy equipment. On Monday he showed Heike the scraper, one of the largest pieces of equipment he works on. Each wheel on the 40-ton machine weighs more than 1,000 pounds, he said.

Base Support Operations maintenance manager Peter Ott said his 12 mechanic apprentices work alongside 38 mechanics at his motor pool. The first year of an apprentice&#8217;s time in the workshop is a learning experience, but in the second year they make themselves useful helping out the trained mechanics on the job.