Grafenwöhr’s old commissary to be a USO facility 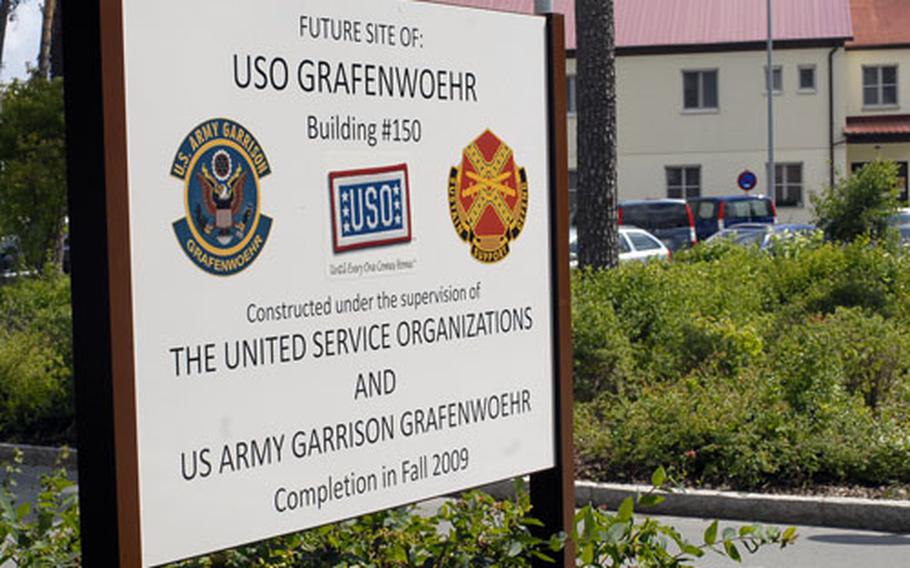 A new USO center in what was previously the commissary at U.S. Army Garrison Grafenwöhr is scheduled to open by the fall. (Mark Abramson / S&S)

GRAFENW&#214;HR, Germany &#8212; The USO and U.S. Army Garrison Grafenw&#246;hr are joining together to give troops and families a place to relax, perhaps play a little XBox, watch a ballgame or just call mom and dad back home.

The garrison has appropriated $220,000 for renovations to the base&#8217;s former commissary, while the USO will kick in an additional $500,000 for computers, furniture and other needs to set up a 6,000-square-foot center and to operate it through the end of the 2009 calendar year. The center is slated to open this summer or early fall.

The USO will share the building with the Red Cross, which moved in about a month ago, and the Better Opportunities for Single Soldiers program, or BOSS.

Although the center is being built with single soldiers living nearby in the barracks and elsewhere in mind, anyone with a Department of Defense ID card will be able to use it, USO and Grafenw&#246;hr officials said.

"There&#8217;s no soldier (community) center here," USAG Grafenw&#246;hr commander Col. Chris Sorenson said. "We needed a place for BOSS. When you want to escape your roommate, you need a place to go."

The location of the new center will be perfect with the dining facility, mailroom and bank nearby, Sorenson added. "More soldiers are coming and we got to be ready to meet the soldiers&#8217; needs."

The garrison planned on converting the old commissary to a communitylike center for soldiers, but had to find furniture before the USO expressed interest in the idea, Sorenson said. He called the timing of the project perfect with the 172nd Brigade scheduled to return from Iraq around the end of the year.

"The USO is going to bring top-shelf stuff. It will be done faster than anything we could have done," Sorenson said.

Walt Murren, regional vice president for USO Europe, said the center will be like a super-sized version of the Warrior Center at Landstuhl Regional Medical Center, with computers, 18 leather seats for watching movies and a snack bar. There will also be a 10-station Internet cafe with laptop computers, Internet phone connections and Skype access with PC cameras for video calls.

"I have been trying to set up [a USO center] there for three years and it has taken us awhile to do that," said Murren. "We realized a couple of years ago the population is expanding &#8230; and we wanted to get in there to take care of the folks.

"This is being built by donations, and the operations will be funded from the American public."