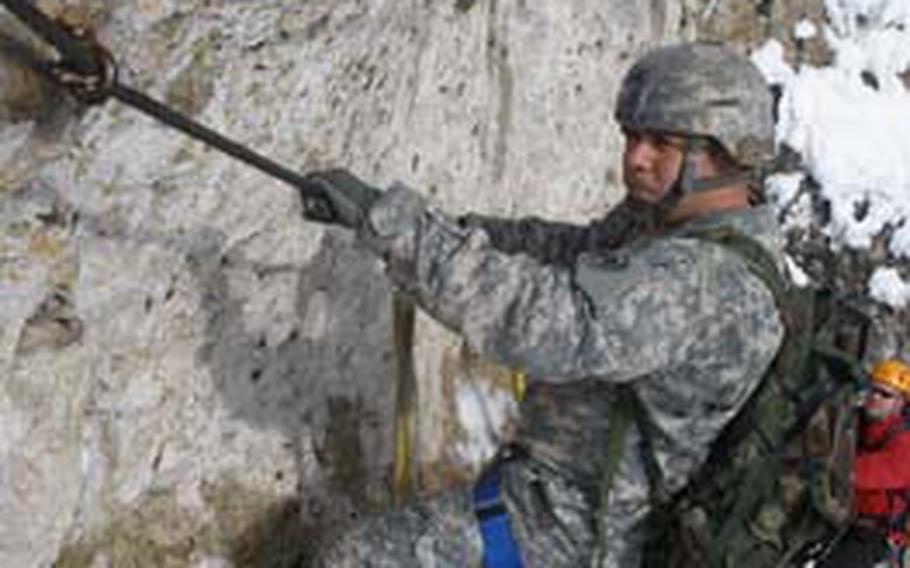 Staff Sgt. Reynaldo Jimenez, with the 2nd Stryker Cavalry Regiment, pulls himself along a cable during a rock-climbing trip in February 2009. The rec center at Grafenwöhr would provide as many of the activities in the Army’s Warrior Adventure Quest program as possible. (Seth Robson / S&S)

The $11.8 million, 20,500-square-foot project will provide high-adrenaline challenges for the soldiers, such as a high-ropes course and a climbing wall, garrison commander Col. Chris Sorenson said.

The facility also would have a paintball range, trails and open field areas by a lake in the garrison&#8217;s training area, he said.

The idea of the center, which could open sometime in 2013, is to deliver as many of the activities in the Army&#8217;s Warrior Adventure Quest program as possible, Audrey Binder, director for Morale, Welfare and Recreation at Grafenw&#246;hr, said.

Warrior Adventure Quest programs in the Army are designed to boost soldiers&#8217; mental toughness to help them cope with post-deployment stress.

The proposed center is about halfway through a yearlong environmental review with the German government, which has to give it a final approval, Sorenson said.

The project will be &#8220;green,&#8221; he said, by maximizing natural lighting, using solar power and incorporating energy-saving features. It will be near the garrison&#8217;s Gate 9 and Dickhaeuter Lake.

Officials said they also plan to make it available as a recreation area for dependents and civilians in the military community.

It will also save the garrison from having to take two-hour roundtrip treks to a high-ropes course in Tennesburg, Germany, Binder added.

The center is also being designed with public input taken via Morale, Welfare and Recreation surveys that were done worldwide.