Grafenwöhr PX complex to be largest in Europe 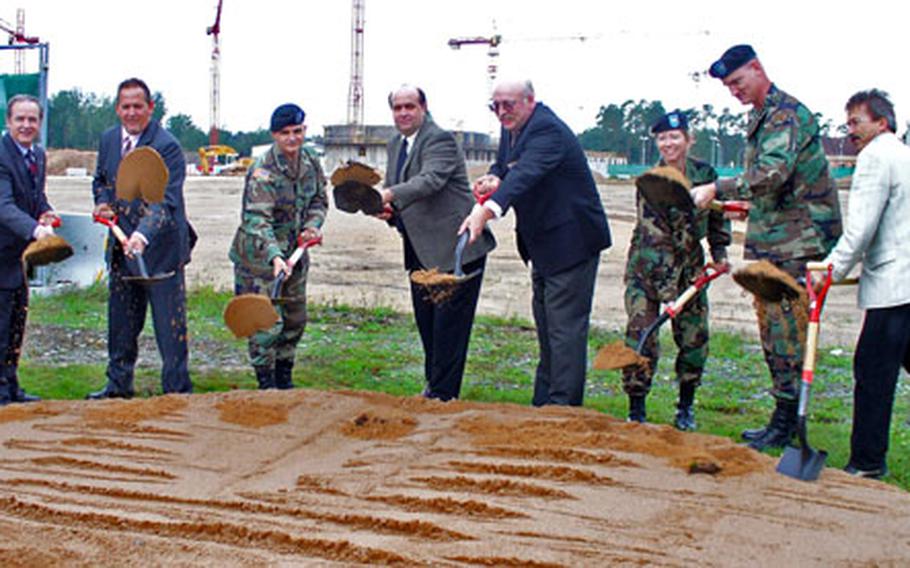 Officials at the Grafenwöhr, Germany, training area toss the first spadefuls of dirt at the construction site for the base’s new shopping center, a greatly expanded mall that will include a post exchange, commissary, food court and various smaller shops. (Courtesy of Kathy Jordan)

Workers at the Grafenw&#246;hr, Germany, training area, home of Europe&#8217;s biggest Army base expansion, put spade to dirt Friday on a key element of the garrison&#8217;s building projects: a sprawling $38 million shopping center.

Set to include a large post exchange, expanded commissary, food court and auxiliary stores, the new mall will take about 1&#189; years to build before it is ready to service the area&#8217;s about-to-explode population.

&#8220;We&#8217;re really excited about having this thing under one roof,&#8221; said Matt Mennona, Army and Air Force Exchange Service general manager for the Grafenw&#246;hr-Vilseck-Hohenfels area.

Currently, many of the major shopping and food centers are at Vilseck, former home of the recently departed 3rd Brigade Combat Team. The main PX there will close but some services (including an expanded furniture store) will remain as the area repopulates with a Stryker Brigade over the next several years.

But the main commercial center will be the complex in Grafenw&#246;hr, where the PX will blow out to 138,000 square feet, Mennona said, making it about 40 percent larger than the main exchange in W&#252;rzburg. It is to open by April 2007.

Flanked by 986 parking spaces, the center will also include a 250-seat food court with a Taco Bell, Subway, Popeye&#8217;s, Baskin- Robbins and possibly a Charlie&#8217;s sandwich shop, Mennona said.

The eateries will be a welcome addition to the base, which recently had its food options winnowed down to Burger King and Anthony&#8217;s Pizza, both of which will remain at the post after the mall is completed.

The fate of the Vilseck commissary, currently the largest in the Grafenw&#246;hr-Vilseck area, is still unknown. The Grafenw&#246;hr store will have more than four times as much retail floor space as the one at Vilseck, said Defense Commissary Agency public affairs officer Gerri Young.

With more than 27,000 square feet of sales space, the new commissary will expand all its major departments and add to its product line, Young said.

And in addition to the beauty and barbershops and the Bookmark and PowerZone set for the new shopping center, plans are in the works for outlying amenities for the growing Grafenw&#246;hr community, Mennona said.

Those may include a new hotel on the post, and a 24-hour, 12-pump shoppette with available diesel fuel, he said.