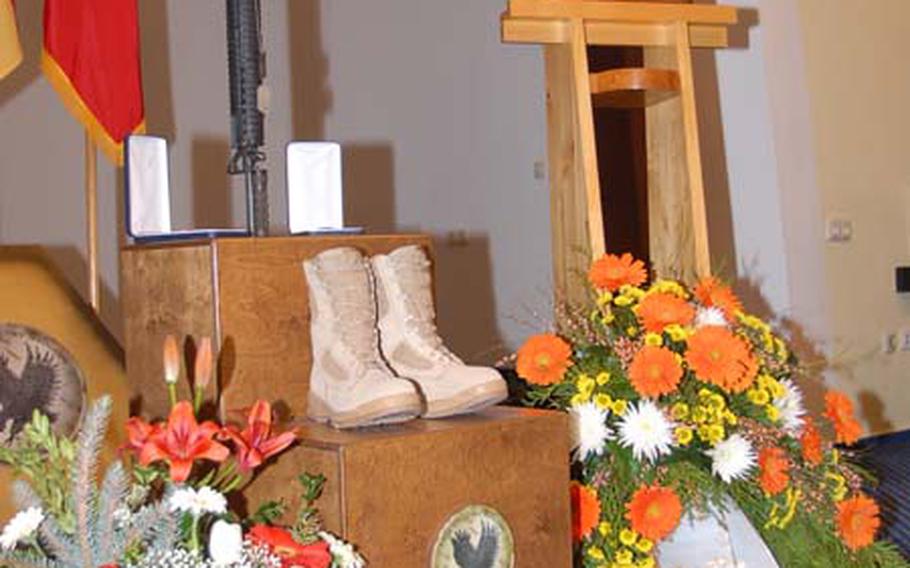 A memorial at the Grafenwöhr, Germany, community chapel Tueday for Spc. Israel Candelaria Mejias, who died April 5 near Baghdad of wounds sustained when a mine detonated near him. (Dan Blottenberger / S&S)

GRAFENW&#214;HR, Germany &#8212; Members of the Grafenw&#246;hr community paid tribute Tuesday to one of their own who was killed in Iraq.

Spc. Israel Candelaria Mejias, 28, of San Lorenzo, Puerto Rico, was remembered as someone who could always be counted on to lift spirits with his sense of humor and love for martial arts, which he often practiced on his fellow soldiers.

Candelaria died April 5 near Baghdad of wounds sustained when a mine detonated near him, according to the Pentagon. Serving on his second deployment, he was assigned to 1st Battalion, 2nd Infantry Regiment in Task Force 3rd Battalion, 66th Armor Regiment, 172nd Infantry Brigade Combat Team.

Several letters from servicemembers were read during the ceremony. Sgt. Erick Dybvig, a close friend, remembered Candelaria&#8217;s love for martial arts. "I don&#8217;t think there is a guy in third platoon that hasn&#8217;t been kicked by him at some point," the letter said.

Dybvig also recalled that Candelaria would do anything for his wife, Angela.

"If you ever got the chance to see the two of them together you would know how much they loved each other," Dybvig said. "He spared no expense to make her happy and to better the lives of his family."

Dybvig, who had been serving since November on his second deployment with Candelaria, recalled an event when Candelaria let his wife purchase a 2,000-euro couch (about $2,740) that he swore "if it didn&#8217;t turn into Megatron he was going to sell it."

Dybvig said he would never forget his best friend, whom he called a brother.

"That&#8217;s what he was, our brother," he said. "If there was anyone you could count on to lift your spirits it was him. He always had a smile on his face and a joke at hand."

Candelaria had been extended in the Army because of stop-loss, according to Dybvig&#8217;s letter.

"All he wanted to do was get out of the Army and forge a better life for his family," Dybvig wrote. "He was going to become a helicopter pilot in Puerto Rico. He was going to buy a house and have a child of his own, which he hoped would be a son. He wanted to train his son to be a fighter, and give him everything in life that he never had."

Capt. Daniel Godbey, who served as Candelaria&#8217;s company commander for 14 months, remembered him for a different reason.

"There are two things that I will always remember about Candelaria," wrote Godbey. "The first is that he was always cold. If the temperature dropped below 95 degrees, he wanted to wear snivel gear and I always teased him about that. The second thing I will remember is his grin. It didn&#8217;t matter what was going on he always had a smile on his face, whether he was goofing around or intently focused on the task at hand."

Godbey went on to say that Candelaria had enough happiness for an entire platoon and there would definitely be a hole in the ranks without him.

"We will always carry Candelaria&#8217;s memory with us, every day, every mission," Godbey wrote.