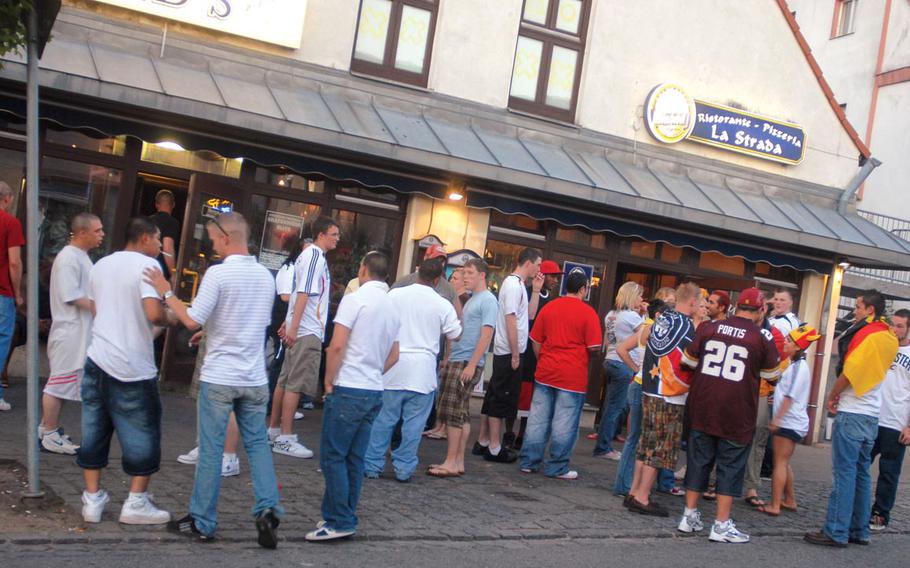 Americans gather in the street in Grafenwöhr, Germany, during a break in the action in the Euro 08 soccer match between Germany and Spain on Sunday. (Seth Robson / S&S)

Earlier this year, the U.S. Army Garrison Grafenw&#246;hr commander, Col. Brian Boyle, told a town hall meeting that noisy soldiers were waking up residents living in on-post family housing near Gate 1 in the early morning hours of Saturday and Sunday.

"There are a small number who are not being good members of our community when they go downtown, and they decide to be loud and obnoxious at 4 a.m. &#8230;," he said.

The community leader added that he was awakened at 6 a.m. by noisy people coming through the gate.

"You can have a normal conversation at Gate 1, and if it is winter and the echoes are right, I can hear you at my house (several hundred meters away)," he added.

At the meeting, Boyle said he would work with the newly arrived 172nd Infantry Brigade to mitigate the problem. Grafenw&#246;hr has seen an influx of hundreds of single soldiers from the brigade this summer with more arriving each day.

Shortly after midnight on Saturday, Grafenw&#246;hr&#8217;s bar district was filled with beer-drinking soldiers, their German girlfriends and college-age children of civilian workers stationed in Grafenw&#246;hr.

A recent indoor-smoking ban sent many revelers onto the street to feed their habit. A crowd of very young women in high-heel shoes and extremely short shorts milled around outside the Checkpoint nightclub while several dozen people stood in the street outside Ed&#8217;s bar.

About eight MPs and uniformed U.S. soldiers from a courtesy patrol watched the action from the sidewalk.

"You can still get a DUI on that thing," one of the MPs warned a soldier who showed up to the party on a child&#8217;s toy electric motorcycle.

Sgt. Adam Marlowe, who was in charge of the MPs in Grafenw&#246;hr on Saturday morning, said patrols keep a close eye on soldiers walking back to post from the bars.

MPs warn soldiers about making too much noise as they head in the gate, a tactic which has helped stem the noise problem, he said.

Inside Ed&#8217;s, Staff Sgt. Alexander Santiago, 30, who serves with the 615th MP Company, was off-duty, getting a blast of country music while enjoying a vodka and cranberry juice at the bar.

"These days there are a lot more people &#8230; way more," he said. "There are new people and different faces. And a lot of these guys come out here and get one drink and just want to fight."

The MP and courtesy patrol presence is stopping many of the fights, he added.

Garld Graves Jr., a civilian air traffic controller at Grafenw&#246;hr who works as a part-time bouncer at Ed&#8217;s, said there were more fights last year between Americans and Russians.

There were a few incidents when the 172nd started to in-process its soldiers, but security workers nipped the problem in the bud, he said.

"In the first couple of weeks they wanted to show off, but we cut it off," Graves said. "We stopped it immediately. There were a couple of fights, but now it is over."

However, the clubs&#8217; security staffs are concerned that problems could spike with the return from Iraq of thousands of 2nd Stryker Cavalry Regiment soldiers to nearby Vilseck in November, he said.

Grafenw&#246;hr&#8217;s provost marshal, Maj. Robert Ray, said in an e-mail that the population has grown substantially at Grafenw&#246;hr, and with that will come increased issues with soldiers.

"Both the Military Police, German Police and unit Chains of Command are taking a very serious interest in ensuring good order and discipline is maintained both on and off the installation," his e-mail said.