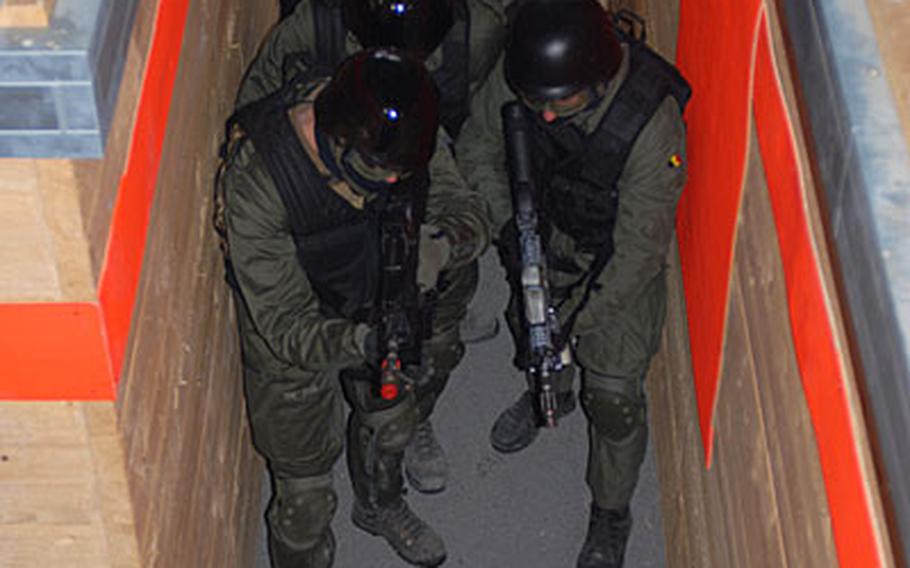 Col. Robert Shoemaker, chief of range control at Grafenw&#246;hr, said the shoot house is for soldiers, sailors, airmen and Marines deploying to Iraq or Afghanistan or those who will go there in the future.

The next urban combat training facility to open at Grafenw&#246;hr will be an urban assault course, which is already under construction, Shoemaker said.

Other projects include a large mock town known as a MOUT (military operations in urban terrain) site and an urban breach facility, used to train soldiers to smash or blast their way through doors and walls, he said.

&#8220;The Army came up with a strategy of required training facilities to teach urban operations under live-fire conditions. It is to train soldiers in live fire for urban operations. We have to ensure all emerging doctrines are incorporated,&#8221; Kennedy said of the projects.

The new facilities will be able to train units with no experience in urban operations as well as very skillful units such as special forces, he said.

The first soldiers to use the new shoot house were part of the Belgian Special Forces Group. A team of four soldiers stormed through the shoot house, gunning down targets that represented armed terrorists hiding in the rooms.

While the soldiers moved through the building, VIPs could safely observe their progress on a television screen about 40 yards away.

Brad Lebrecht, Raytheon operations manager for Grafenw&#246;hr, said there are 14 day and night-vision cameras and numerous microphones in the shoot house&#8217;s 10 rooms. The building has speakers that can pipe in simulated battle effects such as gunshots, explosions and screams. Smells and smoke might be added in the future, he said.

One of the Belgian soldiers who tested the facility, a 33-year-old who asked not to be identified, said his team has trained in other shoot houses but only with wax bullets.

&#8220;The tactics and techniques stay the same (in a live-fire shoot house) but you have to really concentrate to hit your targets and not make security mistakes,&#8221; the soldier said, adding that there is no facility like the Grafenw&#246;hr shoot house in Belgium.