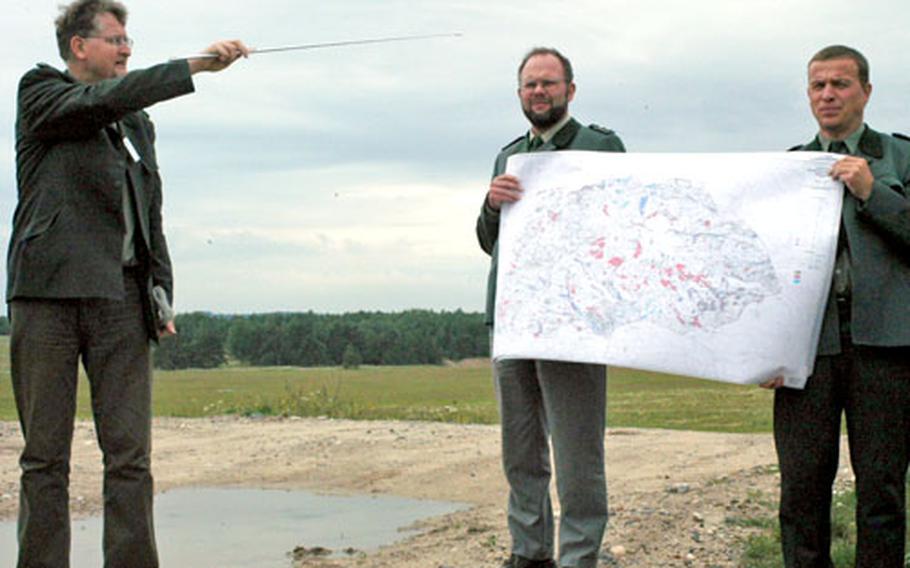 Alexander Patt from the German Federal Agency for Real Estate Management, left, points Thursday to an area of the Grafenwöhr training area where foresters have performed erosion control to prevent parts of the local landscape from washing away. (Ben Murray / S&S)

Luecke&#8217;s three-man survey team presented findings from their study last week to a mixed group of Army representatives and members of the German Federal Forestry from across the country.

In general, Luecke said, the team found the training area contains an &#8220;enormous volume of trees,&#8221; and that the erosion problems that plagued the local landscape several decades ago have been mostly eliminated.

But Luecke said the greater point of the study was to help the military plan for future training missions in a way that would ensure environmental stability of the area, especially with the pending arrival of lighter, more maneuverable Stryker vehicles, which may range across new areas of the zone, Luecke said.

The study also was thorough enough to give installation managers tips on how to improve noise and dust abatement around the fringes of the area, said Maj. Don Mills, chief of operations for the 7th Army Training Command&#8217;s range operations group.