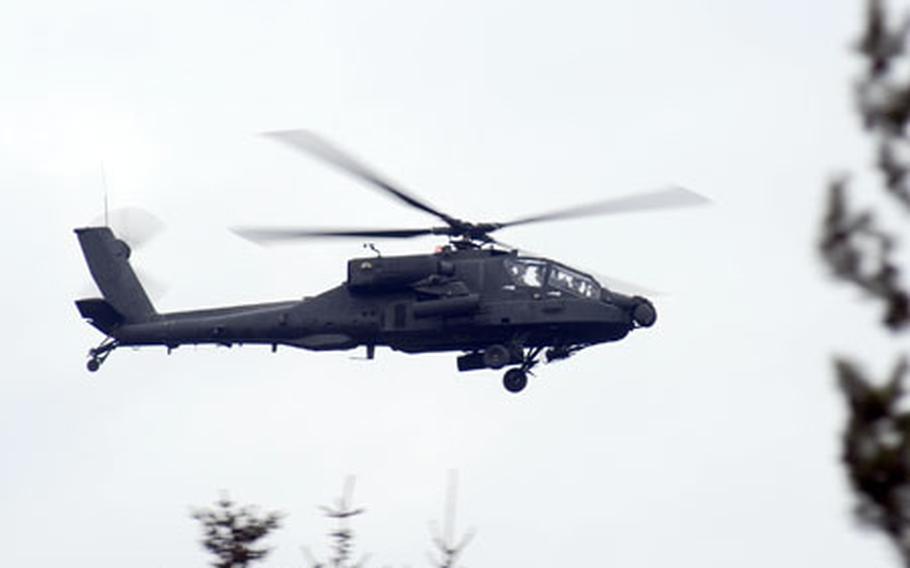 It is the first time running fire has been used on a range in Europe, according to 2-159 operations officer Maj. Scott Williams. The last time the unit fired rockets, in September, the helicopters fired while hovering, he said.

&#8220;For a running fire, you need a larger impact area. We have had to pretty much shut down the whole training area,&#8221; Williams said.

That meant that almost all of Grafenw&#246;hr&#8217;s 77 square miles of ranges were off limits Friday morning during the rocket shoot.

Hoff said running fire is a tactic widely used in Iraq and Afghanistan.

&#8220;We are trying to get away from hovering fire in this fight to prevent the aircraft being a target,&#8221; he said.

Williams said the adoption of running fire as a downrange tactic predates recent incidents of aircraft downed by enemy fire in Iraq.

&#8220;The idea is to bring as many units in one place as we can to maximize training effectiveness,&#8221; Crowson said.

Skills taught in the training are a core capability for helicopter units headed downrange, Hoff said.

The training scenario used for the exercise involved the Apaches and MLRS units taking out vehicles stolen by insurgents, Hoff said.

Each Apache carries up to 16 Hellfire missiles, which have an unclassified range of 8 kilometers and are designed to take out tanks or more lightly armored targets, Williams said.

Cpl. Brian Edinger, who returned with his unit, the 501st Military Intelligence Battalion, in September from a yearlong mission to Iraq, said it was a thrill to see so many rockets fire at once.