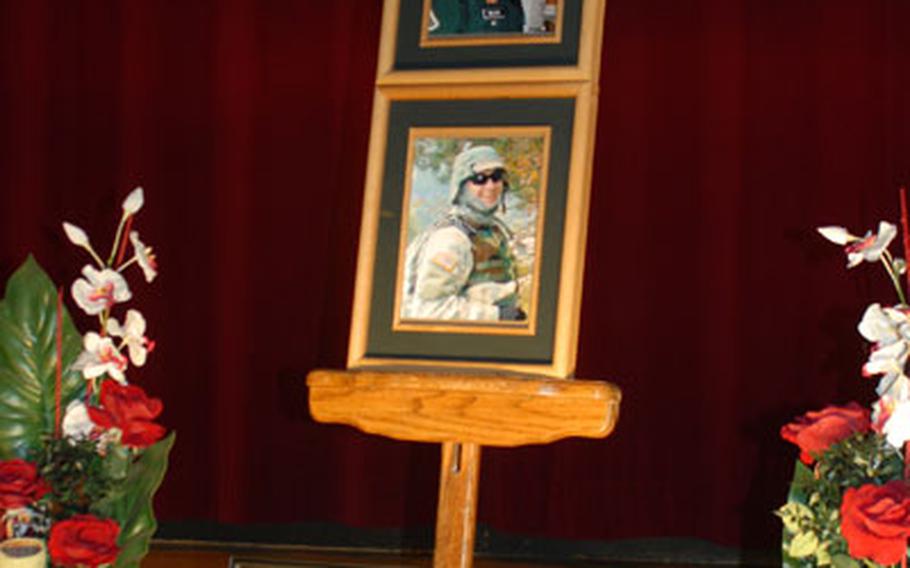 Photographs of Spc. Seth Allen Miller stand at the front of Grafenwöhr, Germany&#39;s Tower Theater during a memorial ceremony Monday for the soldier, who was killed in a training accident last week. (Seth Robson / S&S)

The 27-year-old, who was born in Visalia, Calif., dreamed of becoming a professional athlete since his first game of football in grade school, his mother said.

&#8220;He was headed to be a middle linebacker for some fortunate college. &#8230;&#8221; she said. Then he was stabbed protecting a friend, and his professional sports dreams were put on hold, she said.

The family regards the training incident, in which Miller was crushed between two palletized loading systems, as a terrible accident, she said.

Soldiers from the 23rd had tears in their eyes during the memorial, which featured a photograph of Miller with the school-age wrestlers he helped coach at the garrison.

The 23rd Ordnance Company commander, Capt. Jerome Barnard, said he never saw Miller without a smile, even when his commander was talking about something serious.

He was always a step ahead of other soldiers when it came to sports, music, movies or video games, he said.

He was also a step ahead when it came to soldiering. For example, Miller qualified &#8220;expert&#8221; on his first try after he was assigned the M-249 machine gun, Barnard said.

Miller would have wanted his comrades to soldier on and prevent similar accidents from happening to others, Barnard said.

The Army is investigating the cause of the accident, an official said.