Grafenwöhr, Hohenfels to be linked for exercise Soldiers from the 1st Battalion, 6th Infantry Regiment at a military operations in urban terrain (MOUT) site at Grafenwöhr Training Area, Germany. Starting next week, the battalion will begin at mission-rehearsal exercise at the training site. (Seth Robson / S&S)

Soldiers from the 1st Battalion, 6th Infantry Regiment at a military operations in urban terrain (MOUT) site at Grafenwöhr Training Area, Germany. Starting next week, the battalion will begin at mission-rehearsal exercise at the training site. (Seth Robson / S&S) 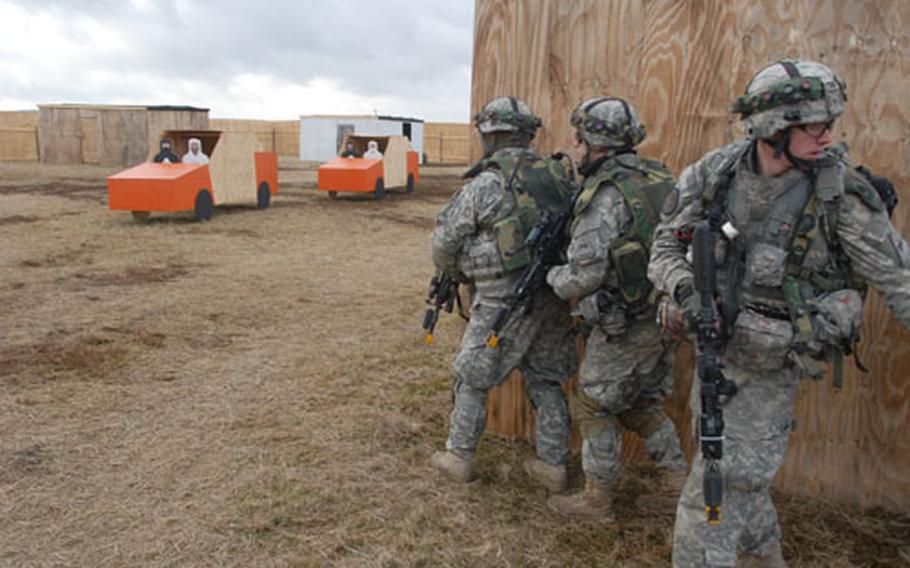 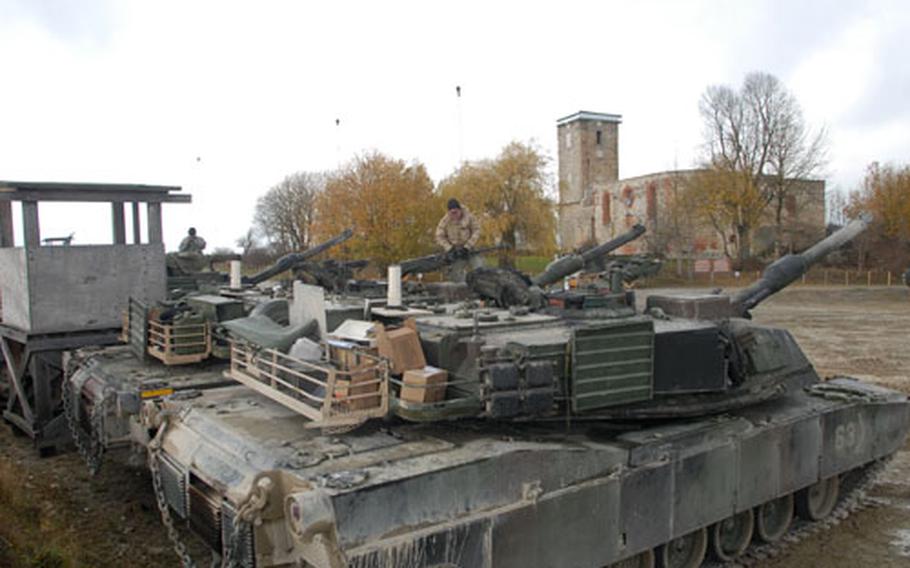 1st Battalion, 6th Infantry Regiment soldiers are living in temporary combat outposts at Grafenwohr Training Area during a mission rehearsal exercise to prepare them for deployment to Iraq early next year. This combat outpost is next to the 700-year-old Hopfenohe church. (Seth Robson / S&S)

GRAFENW&#214;HR, Germany &#8212; U.S. Army training areas in Grafenw&#246;hr and Hohenfels will be linked for the first time during an exercise to prepare the 2nd Brigade, 1st Armored Division for deployment to Iraq.

During the nine-day exercise, which kicks off Monday, most of the brigade will be based at Hohenfels but an entire battalion task force &#8212; 1st Battalion, 6th Infantry Regiment &#8212; will work out of Grafenw&#246;hr.

In past mission-rehearsal exercises, brigades have been based entirely at Hohenfels, although units have traveled to various German training areas.

Maj. Matt Vanwagenen, a member of Joint Multinational Training Command&#8217;s Timberwolves Observer Controller Team, which is overseeing the 1-6 training, said the move to base units at Grafenw&#246;hr during mission-rehearsal exercises is driven by the operating environments in Iraq and Afghanistan.

&#8220;The extended distances that our guys are operating at down there has driven us to make an extended battlefield at Grafenw&#246;hr and Hohenfels,&#8221; he said.

It takes up to two hours to drive the 70 miles between the training areas in a military vehicle, Vanwagenen said.

Timberwolves Team leader Lt. Col David Batchelor said the Army has an agreement with the German government that allows U.S. military convoys to use particular roads linking the training areas.

The mission-rehearsal exercise involves some big changes for Grafenw&#246;hr Training Area, traditionally a major center for live-fire gunnery in Europe. For example, 1-6 soldiers are living at a forward operating base and three combat outposts built on ranges in the training area.

Batchelor said the MOUT sites may stay at Grafenw&#246;hr after the training finishes or be placed in storage so that ranges can be used for other types of training. But he said he expects future exercises to involve similar training at Grafenw&#246;hr.

Lt. Col. Brian Eifler, 39, of Farmington Hills, Mich., commander of 1-6, said his unit was an hour away from brigade headquarters when he served in Iraq in 2003 with 4th Infantry Division.

One challenge posed by distance is processing detainees, he said.

&#8220;We have to deal with processing detainees back to the brigade detention facility. We organize a combat patrol to get them back but the challenge is to do it without taking combat power off the battlefield,&#8221; he said.

But he added that the benefit of replicating the distances his unit will work with in Iraq outweighs that deficiency.