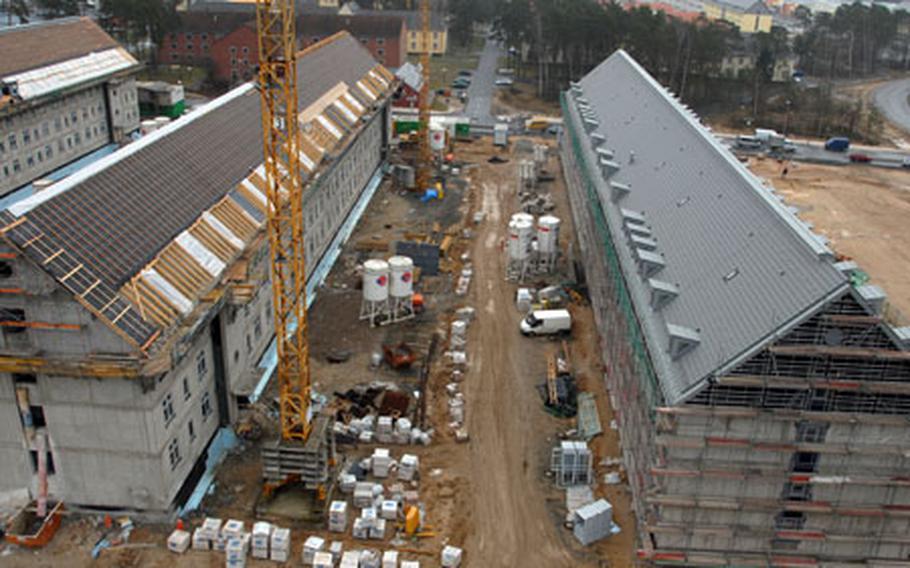 Construction is on time on for eight new barracks that will be ready for soldiers arriving at Grafenwöhr this fiscal year. (Seth Robson / S&S)

Construction is on time on for eight new barracks that will be ready for soldiers arriving at Grafenwöhr this fiscal year. (Seth Robson / S&S) Nearly 600 soldiers are expected to move into the area by the end of the fiscal year as part of U.S. Army Europe transformation plans. (Seth Robson / S&S)

GRAFENW&#214;HR, Germany &#8212; There will be more than enough space for soldiers moving here this year under U.S. Army Europe&#8217;s transformation plans, thanks to all the barracks construction projects under way.

Under USAREUR plans, 588 soldiers and 846 family members will move to Grafenw&#246;hr by the end of the fiscal year in September, USAREUR spokesman Bruce Anderson said Friday.

Grafenw&#246;hr-bound units include the 574th Supply Company from Mannheim, the 1st Inland Cargo Transfer Company and the 5th Maintenance Company (Ordnance) from Kaiserslautern, and the Headquarters and Headquarters Detachment, 709th Military Police Battalion from Hanau.

Plans to accommodate the troops &#8212; and others who will follow &#8212; are at an advanced stage, with the defense budget allocating $62 million to complete headquarters buildings and motor pools between Grafenw&#246;hr&#8217;s main post and the training area, according to Maj. Eric Bloom, Joint Multinational Training Command spokesman.

Soldiers are already living in several new barracks beside the soon-to-open new post exchange/commissary facility at Grafenw&#246;hr, and another two barracks beside a small lake on the main post are ready to open. Three more barracks are in various stages of construction next to the new fitness center.

In all, eight new barracks will be finished by summer&#8217;s end, according to Stephen Burgler, a project manager for the Baudienststelle, a German government office overseeing the construction projects to make sure they comply with German law.

The project was delayed by four months following severe weather from Nov. 18, 2005 to mid-March 2006, said Wolf Christian, a construction chief for Mickan, a company building the barracks.

The project is not without danger. A worker recently survived a fall from the roof of one barracks after he slipped while installing a lightning rod. The man was caught by a safety curtain and returned to work the next day, Wolf said.

Four more barracks will be built next financial year and others are being renovated, he said.